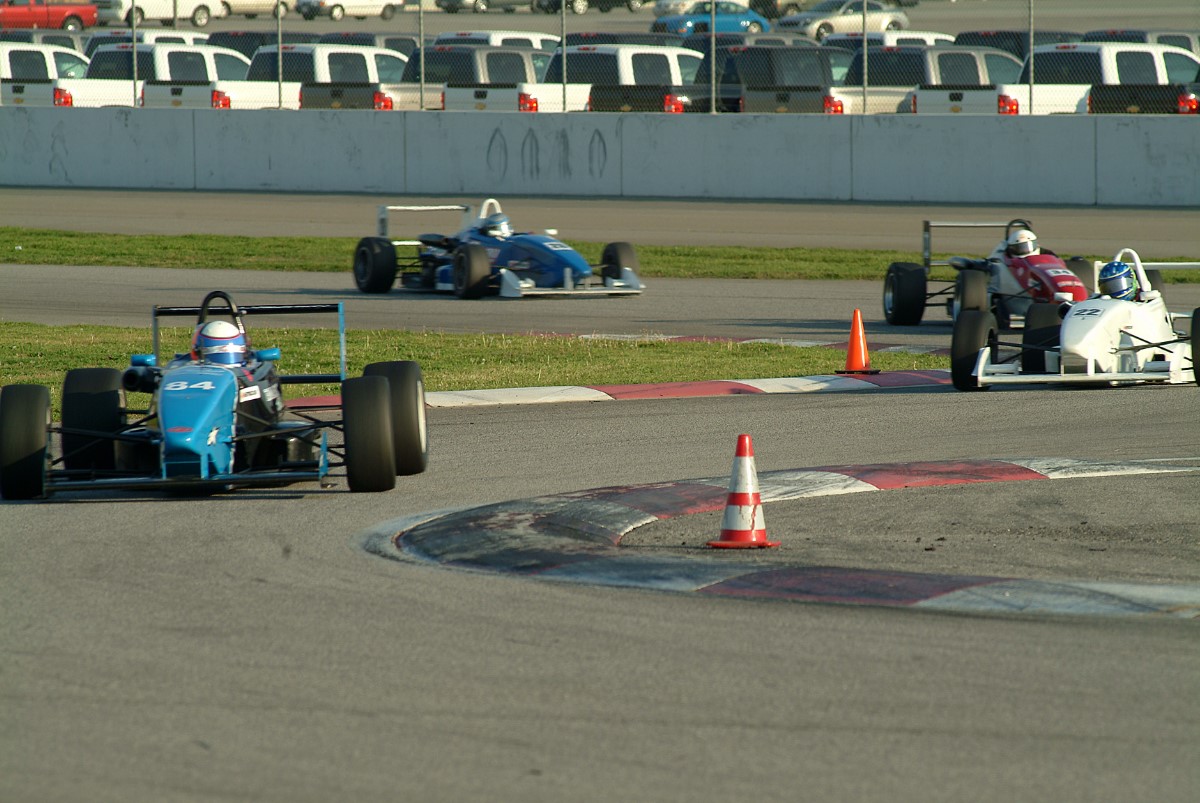 Fontana, Calif. – Robert Podlesni completed the sweep, Pole, Win and Fastest Race Lap to earn maximum points in his return to the Pacific F2000 Series today. The start was somewhat confused when Jeff Westphal’s PR1 Motorsports, TNT Demolition/Cacci Construction Van Diemen refused to fire on the grid and by the time it did, he was more than half a lap behind. This should have left a gap in the outside of the front row. Instead Scott Rarick in his Piper/Fast ward/Red Line Oil Piper DF5 lagged behind Max Hyatt in the PR1 Motorsports, Performance Drink, Van Diemen, creating a single line start with the outside row having a clear run at the green allowing Shaun Modisette, PR1 Motorsports, Carson Trailer’s, Van Diemen to move from fifth to third. The order at the end of the first lap was Podlesni in his Terminal Velocity/Alpinestars Van Diemen for Dave Freitas Racing leading from Hyatt, Modisette, Rarick, Nick Freytag, PR1 Motorsports, G Factory/Sodi Kart Van Diemen, Chuck Hulse, Silicon Salvage Van Diemen, Peter Hansel, Comar Performance Inc., GS610 Maximum Performance Brake Fluid Van Diemen, Ira Fierberg, Dave Freitas Racing, Personal Injury Law/Sparco USA an Diemen, Dave Freitas Racing Teammate Peter Hastrup, Western Building Materials Van Diemen and James Hakewill, Van Diemen in the first ten positions.

Hyatt passed Podlesni for the lead on lap two and Fierberg spun and dropped to fifteenth with only the unlucky Westphal behind him and he began a spirited drive passing five cars to finish in tenth place.

After two laps, Podlesni retook the lead which he held to the end and lead pack of four cars began to slowly inch away from the rest of the field. Podlesni said this was a difficult time of the race as he was unable to break far enough ahead and stated “At Fontana you need to have a gap of 1.1 seconds to be able to keep a driver behind but Max was only .7 back so I had work hard to keep him behind". “I also think that the four of us were a little faster when I was leading and enabled us to break away from the rest of the field". Max hounded Robert throughout the race and the first four cars continued in this order nose to tail until lap thirteen when Rarick got past Modisette for third place and the final step on the podium. When the checkered flag fell these four finished within 2.035 seconds. Hyatt said, “I had several opportunities to try to pass Robert, then three laps from the end I got loose in turn eight and Robert got a big enough advantage to hold me off". Rarick was satisfied with his third place after the jumbled start which caught him out a bit, “I mistook Max for the second place qualifier and expected him to take his place next to Robert at the start and I stayed behind him, when I should have been next to him, which cost me some at the start".

Behind the leading four was another group of three cars in their own battle for fifth place which Nick Freytag secured three laps from the end with a pass of Chuck Hulse who said “We raced hard for that position, side by side at times, I made him work for it". Nick said he was satisfied with fifth in his first race with PR1 Motorsports, “I had a lot of fun racing with Chuck and in the end I was only .3 of a second off Podlesni’s best lap, so it is a satisfactory beginning."

The third car in this group was Peter Hansel who finished seventh and was the Expert Class winner. For his efforts in sixth, Chuck Hulse claimed the Master’s Class victory.

Rounding out the top ten were Peter Hastrup in a lonely eighth place followed by James Hakewill and Ira Fierberg. The final five finishers where Nick Kodenko, who had an impressive run to eleventh in his third race of the series, Les Phillips, back in the series after a year layoff in twelfth, Bill Kincaid, thirteenth, Richard Lai Fatt, a rookie in fourteenth, the unfortunate Jeff Westphal, fifteenth and Dennis Gaughary sixteenth.

Round two of the series is tomorrow at 2:15 local time after morning qualifying.