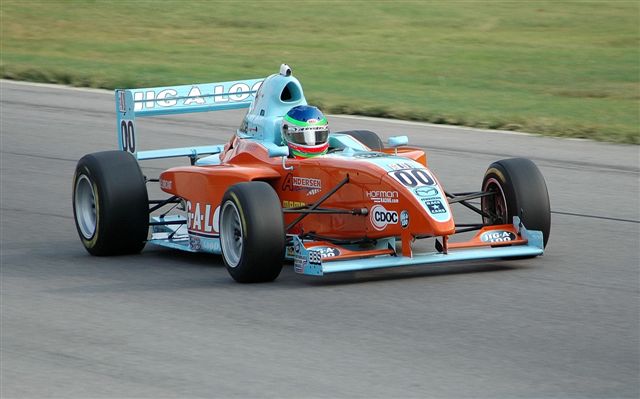 The scholarship winners are slated to compete at Brands Hatch, England on Oct. 27-28 and at Snetterton, England Nov. 3-4 in the six-race Formula Palmer Audi Autumn Trophy competition.

Andersen Racing team owner Dan Andersen was impressed with how both teens adapted to his Star Mazda cars. "I think both boys recognize that the effort required to drive a Star Mazda car, with its bias-ply Goodyear tires, is more than they are used to," he said.

"One of my engineers commented prior to the start of actual testing that they were both clearly mature, polite, even-tempered and poised, but he wondered aloud if they were going to be fast. At the end of the test we both agreed they were that too!" Andersen said. "My compliments to the Team USA selection committee, as they have chosen candidates who have the speed as well as all of the other important attributes they’ll need to advance in the sport."

Andersen added that both young men adapted well when the team’s engineers made spring and damper changes. "They underwent a full test-day program, with data analysis sessions, video camera reviews with the engineers and the like," he added.

"All of us at Team USA want to thank Dan Andersen and everyone else at Andersen Racing for their help, as well as Gary Rodrigues of the Star Mazda Championship presented by Goodyear," said auto racing writer/broadcaster Jeremy Shaw, the scholarship’s founder and president.

Andersen and Shaw indicated that they intend to work together to provide tests for future Team USA scholarship winners too.

"I had a fantastic time working with everyone at Andersen Racing," said Barrett. "The knowledge I learned from this test has greatly helped me prepare myself for the FPA Autumn Trophy this fall. I really want to thank everyone involved with the Team USA scholarship program for all of their support and for giving me this great opportunity."

"It was the first test I’ve ever done in a Star Mazda car, so a lot of it was just learning the car," Miller said of the test. "Working with [engineer] Mike Reggio was a good experience. We had a shock problem but we worked hard and overcame that, which showed that we could work through problems. I think it was really good preparation for the Formula Palmer Audis we’ll drive in England. It gave us some good track time that [Scholarship founder] Jeremy Shaw really wanted us to have."

Although the test was private, SPEED TV was on hand to tape the activities for future airing.