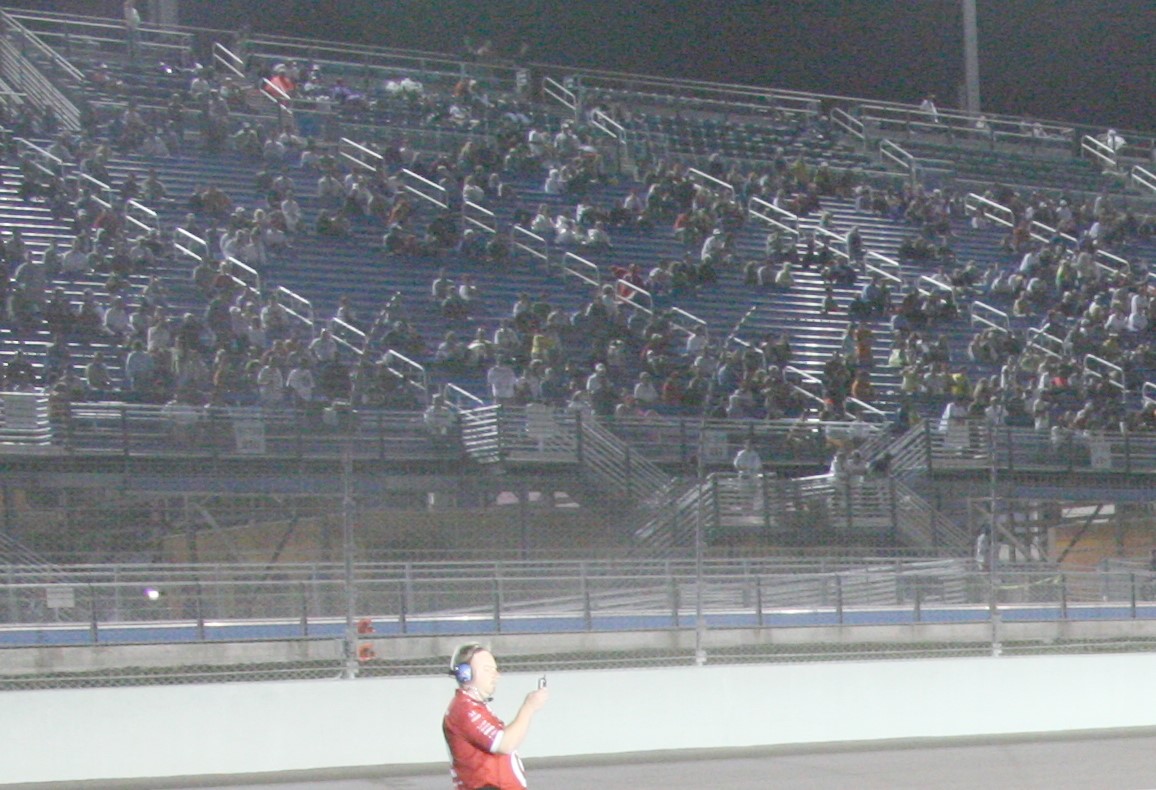 UPDATE #3 Another reader writes, I wholeheartedly agree with the last writer. Andy Fogiel. Tony George is not the person to lead open wheel racing in the US. His IRL "series" is all about one race… the Indy 500. There is pathetic interest in the IRL races other than the 500. I know, I have seen it firsthand. The depressing crowds at Homestead speak to this situation once again (as Autoracing1's picture shows). And this scene will be repeated many more times this season. After 11 years and even with the Indy 500 the IRL is still on life support… has very poor attendance… runs antiquated and slow hardware (especially on road courses)… and there is yearly worry about not having 33 cars at Indy. And TG's founding "vision" of the IRL of all ovals and US drivers has been abandoned.

Owners like Ganassi and Penske obviously see the IRL is not going anywhere, or they would not speak out. Their sponsors and the TV cameras see the empty stands, too. Can you imagine how hard this is for them to deal with? Racing as a marketing tool does not do well under such circumstances.

Let's be truthful… without the Indy 500 the IRL is a failed series with little interest. When the Indy 500 is left out of the discussion… Champ Car has a superior set of venues, including international ones… race weekend attendance figures are very high… and they have spectacular new cars. So, the time is ripe to get together and use the strengths of each series. IRL has Indy… and Champ Car has better race venues with better race attendance and exposure for sponsors, and its very fast new hardware (broke the 2006 Toyota F1 record at Laguna). And there must be something very good about Champ Car… when an IRL owner (Rahal) has his son running in Champ Car.

It is my hope that Tony George will listen to the owners who have stuck with him like Ganassi and Penske… who now feel the need to forcefully speak out. For the good of open wheel racing… give up control of the open wheel series beyond Indy. If you do not, it is not hard to imagine that one of these days teams may leave the IRL and come over to Champ Car. You will then be forced to go back to the old pre-1996 model where there is an open wheel series which you do not control. You'll have to accept this and make peace… or you won't have enough entries in your 500. The hand could be forced. So, this can all be done nicely… or in difficult fashion.

We need an end to the upheaval in open wheel racing since 1996. I fervently hope we see the day soon when open wheel racing in the US is restored to its former strength… easily, positively, and without any more turmoil. Then we will be able to enjoy the stronger series as a whole… with the unique excitement of "Back Home Again In Indiana" and "Gentlemen and women, start your engines."

03/25/07 Another reader adds, With all due respect to the last writer, how is selling off to Tony George in anyway a "do the right thing" move? If OWRS was in this to make money quick, maybe. But I'd like to think KK, GF, and PG are in this for the greater interest of AOW. Tell me TG's track record on the affect he has on AOW qualifies him as one to run the sport now or in the future? Mark C's comments regarding TG smelling blood and going in for the kill based on the current Champ Car issues with driver lineup in limbo, and car count questions. To me it speaks to how OWRS is the AOW organization that has any real chance of trying to resurrect this sport from the damage caused by such an unqualified person's attempt to seize total control. OWRS is willing to make the hard decisions during a time when obviously hard decisions need to be made, and this cutting the team subsidies was a "tough love" move and hard decision that CC is obviously having problems responding to. Obviously OWRS underestimated how ill-prepared teams were for this move, especially since 2 of the 3 OWRS owners are officially still running only 1 car. But to sell the farm over this?

Tell me with the IRL's driver stability, whopping 20 car line up, publicly recognizable sponsors, all this would change the sport around if OWRS did sell the farm? Homestead reaffirms what the IRL is doing is not working, and these very aspects in CC that Mark C uses to conclude TG will be empowered to smell blood and go for the kill, all I can say is we all are grossly underestimating how long term OWRS thinking and actions are in terms of turning this sport back into a viable business. That is what will make or break whether there is AOW in 5 or 10 years from now, not unification under a proven disaster of a leader.

The only way AOW will survive and hopefully thrive once again is to turn the sport into a fiscally responsible and profitable business. Unification alone won't turn this sport around, it will take someone or a group of people with a clue and solid business acumen and creativity to do it, and for that I can only hope OWRS makes Champ Cars work, because I have seen enough over the past 10 years of this split to know Tony George won't be able to carry this sport beyond the obscurity he alone is responsible for dragging it down into. Andy Fogiel, Thibodaux, LA

03/25/07 A reader writes, Dear AutoRacing1.com, In the LIVE interview of Chip Ganassi and Roger Penske during yesterday's IRL Race in Homestead, Ganassi was asked a benign question along the lines of 'You and Mr. Penske are instrumental in the series growing and going forward can you tell us what the plans are?' Ganassi replied CLEAR AS DAY…. (something along the lines of) ‘As I have said the most important thing is for the two series to merge and do it immediately, that is what Roger and I want to see happen and we would work hard to make it happen’ or something along those lines…… THEN HE SAID…. ‘I think it could be really big and successful.'

Ganassi and Penske are calling for a merger at a time when the IRL is getting more sponsors and has 20 cars on the grid and Champ Car has no real sponsors outside of two (CDW & McDonald's) that are not directly associated with their millionaire owners and struggling to field 15 cars. A MERGER being called for by the stronger side equals a GOOD opportunity for Kalkhoven and Forsythe to ‘Do the Right Thing’ and recover their investment by selling up… at this point who cares who owns it or who has 51%. The patient is in the trauma ward and anything would be an improvement. Don Morgan

Dear Don, Like we said, all the empty grandstand seats in Homestead last night probably made Ganassi and Penske realize the IRL is not going anywhere either. Almost all the owners on both sides of the battle have said there needs to be a merger. We don't think Tony George has any desire to merge and would prefer to wait Champ Car out for it's clear that his side feels without the Indy 500 Champ Car will eventually die.

Champ Car for its part is emboldening George. With two weeks to go before the first race there are huge gaps in the schedule, race dates being moved but still no confirmation, the entire PR staff is gone and replaced by a single person (Sid Priddle) who has a long way to go before he's up to speed, many teams/cars without a sponsor, a low car count and the driver lineup still very much in flux. Champ Car is going to have to have a lot of announcements over the course of the next two weeks or George will begin to smell blood and go in for the kill. Mark C.

03/24/07 During the pre-race TV broadcast for Saturday night's XM Satellite Indy 300 in Homestead Chip Ganassi said the two series (IRL and Champ Car) need to get back together. He was standing next to Roger Penske and he said both he and Roger feel that way. Penske did not deny it. Perhaps they were influenced by the sparse crowd in the grandstands.