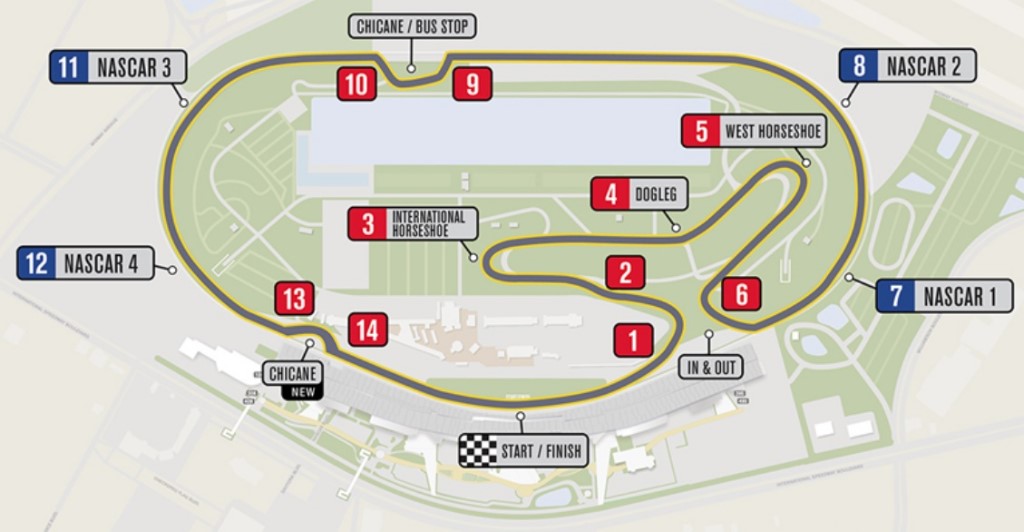 NASCAR officials announced Thursday afternoon several key competition components of the August race weekend at the Daytona Road Course, including the addition of a chicane off Turn 4 of the famed oval.

The chicane will add another tactical element to the intricate road course that will force drivers to be up on the wheel at all times for what is sure to be an unforgettable weekend of racing among four series.

“I think, more than anything, it’s going to add even more excitement for the fans than we were already expecting," Daytona International Speedway president Chip Wile said. “It’s really, truly making it NASCAR-centric. Obviously we have our road course that’s been in existence since 1959. But now, we have something very unique that no driver has seen.

“Daytona International Speedway is known for producing iconic moments in the history of NASCAR, and this will surely join that long list," said track President Chip Wile. “Just when you thought the racing couldn’t get any more intense and interesting at the ‘World Center of Racing,’ it did. The turn four chicane gives the drivers a final shot to make a pass coming to the famed finish line. The fans in the venue are going to be in for a treat on the DAYTONA Road Course – just like the races on the old Daytona beach/road course that were put on by Bill France, Sr. in the 1940s and ‘50s.

The races will be held on the same road course as the Rolex 24 At DAYTONA, North America’s premier race for sports cars. The new chicane, located on the skid pad off turn four, measures nearly 500 feet from the point of entry to the last point of exit off the straightaway racing surface, ranging from 38-48 feet width throughout.

A limited number of fans will get the opportunity to take in the doubleheader on Sunday (Aug. 16), consisting of the NASCAR Cup Series and NASCAR Gander RV & Outdoors Truck Series. Fans can get tickets, which start at $49 (both races included) for adults and $10 for kids 12 years old and younger, by visiting www.daytonainternationalspeedway.com or calling 1-800-PIT-SHOP.

The finalized schedule for the DAYTONA Road Course, including distances, laps and stage lengths are:

One driver looking forward to competing on the DAYTONA Road Course is reigning NASCAR Cup Series Champion Kyle Busch. The driver of the No. 18 Joe Gibbs Racing Toyota, who, along with Martin Truex, Jr. leads all active drivers in road course wins with four, competed in his first Rolex 24 At DAYTONA in January.

“I’m looking forward to the DAYTONA Road Course race," said Busch, who was impressive behind the wheel of his AIM Vasser Sullivan Lexus, which finished ninth of 18 entries in the GTD class after several mechanical challenges. “It’s something different for us. I obviously have experience there running in the Rolex 24 this year. It’s good that I am familiar with the course layout, but those cars I raced back in January are much different than our Cup cars, so the handling and feel will be much different this time around."

NASCAR also announced drivers will be prohibited from running multiple races during the weekend, as well as a NASCAR Cup Series competition change, that will now see a high downforce with 750 horsepower aero/engine package.

“NASCAR and its OEMs ran several simulations to determine the course layout and engine/aero package for the inaugural NASCAR race on the Daytona International Speedway road course," said NASCAR’s John Probst, Senior Vice President of Racing Innovation. “Due to the predicted high speeds and loads on the braking system, NASCAR will add a chicane off oval Turn 4 at Daytona and move to a high downforce 750 hp aero/engine package for the NASCAR Cup Series race on Aug. 16. We believe this will combine vehicle performance and safety to provide the best possible road course race for our fans."

The limited number of fans for the doubleheader of action is in accordance with public health officials and local, state and federal authorities on amended safety protocols and procedures that will provide a safe experience for all fans in attendance. Frontstretch seating is available, plus there are options for infield camping guests.

Tickets also remain on sale for the Saturday, Aug. 29 Coke Zero Sugar 400, which will take place under the lights on the 2.5-mile trioval. A summertime staple since 1959, the switch of the race from July to August this year makes this the Cup Series Regular Season Finale prior to the start of the 2020 NASCAR Cup Series Playoffs. Tickets also start at $49 for adults and $10 for kids 12 and under. Limited infield camping is also available. Special pricing options are available for the “August Double," featuring both DAYTONA Road Course events (Cup and Gander Trucks) and the Coke Zero Sugar 400.