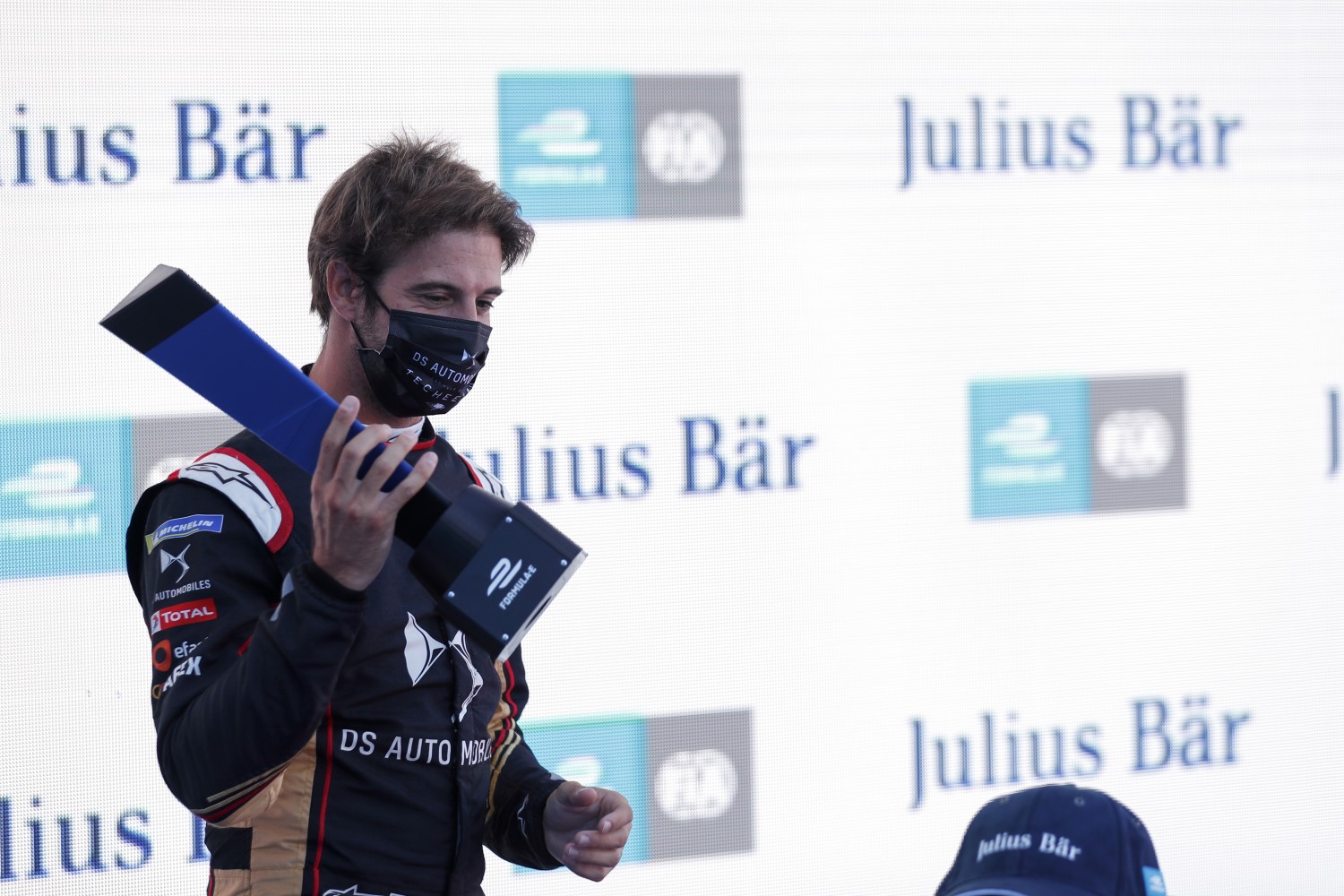 The team orchestrated who would win to ensure both a driver's title and a constructors title.

By allowing polesitter Vergne to return to first place, he led a team 1-2 over da Costa by 0.497s to score his first victory of the season, but more importantly it allowed Vergne to move up into 2nd place in the points so now both DS Techeetah drivers are 1-2.

DS Techeetah has now secured victory in four of the last five rounds, including three at the most intense season finale in motorsport history from Berlin’s Tempelhof Airport.

Da Costa holds a Drivers’ Championship lead the likes of which Formula E has never seen – a 76-point, unassailable advantage over team-mate Vergne, who now sits second with 60 points left to play for.

There’s an additional accolade for the team to chase this season. No outfit in Formula E history has seen its drivers finish one and two in the Drivers’ running – a firm possibility with two races of the season left to run at Tempelhof on August 12/13.

[adinserter name="GOOGLE AD"]Oliver Rowland (Nissan e.dams) fired off the line and took a look at race leader da Costa on the run into Turn 1 but thought better of it, whilst Mahindra Racing’s Alex Lynn completed a switchback on Felipe Massa to pinch sixth two turns later.

Down the order, Max Guenther (BMW i Andretti Motorsport) got caught unsighted as the field bunched ahead of him, smashing the nose off of his iFE.20 and forcing the BMW i Safety Car into the fray.

A fairly calm restart followed with just over 35 minutes to go. Thunderstorms were in the air as the field held station, as drops of rain fell in the pit-lane. The weather did hold off, though, leaving the drivers to it.

Rene Rast (Audi Sport ABT Schaeffler), Alex Lynn (Mahindra Racing) and Felipe Massa (ROKiT Venturi Racing) were the first to jump into the ATTACK MODE activation zone, with Nyck de Vries (Mercedes-Benz EQ) following a lap later. The quartet fought over fifth with Lynn heading the way from de Vries, Rast and Massa when it all shook out.

The Nissan e.dams’ followed, with Rowland and Buemi next opting to take the 35 kW boost, leaving them to slot back into that pack whilst Vergne and da Costa did likewise a lap later – the lead pair emerging first and third, now split by a charging Rowland.

Da Costa had enough in hand to retake second with a minute’s ATTACK MODE left to use, and sliced by Rowland on the next tour. The teamwork that both DS drivers referenced before the race was clear for all to see when the standings leader was allowed to trade places with Vergne for the lead at the half-way stage.

Mahindra’s Jerome D’Ambrosio was among the first to take a second dose of ATTACK MODE and made it count by stealing 10th and the final points-paying position from Rast. Audi Sport ABT Schaeffler’s Lucas di Grassi was also making up good ground – his latest move on Mitch Evans (Panasonic Jaguar Racing) for seventh.

It was status quo at the head of the pack during the second phase of ATTACK MODE activations with the DS Techeetah duo of da Costa and Vergne leading the Nissan e.dams pairing of Rowland and Buemi, with di Grassi quietly dispatching Lynn to round out the top six with 10 minutes plus one lap to run.

The lead pair once again switched road order as they sought to optimize their remaining energy and fend off the Nissans just behind. Vergne now had the race lead from da Costa, Rowland and Buemi with de Vries joining the party. Di Grassi, meanwhile, was in a race of his own in sixth.

Massa flew up the inside of Evans into the final turn, repaying the Jaguar driver for a similar move earlier on lap 28. Tidily done from the Brazilian for seventh but Evans was able to make it back past as the clock ticked down, leading home Andre Lotterer (TAG Heuer Porsche) and Lynn, whilst the ROKiT Venturi Racing man slipped to an eventual 10th.

Nissan e.dams employed the same team ethic as DS had displayed, as Rowland moved aside for Buemi who had more usable energy remaining and felt best placed to set about chasing the leaders.

Rowland was pipped by De Vries, however, with the Mercedes-Benz EQ man finding his way into fourth with a late dive halfway around the final lap.

Vergne and da Costa were able to hold station under pressure from Buemi to take a DS Techeetah one-two, discerning the final destination of both the Drivers’ and Teams Championships in the process.

“I have no words right now," said a visibly emotional Antonio Felix da Costa. “The bad times immediately come to the forefront of my mind because I came so close to giving up on many occasions in my career – thanks to everyone around me I never did.

“This team knew what I could do even when I was finishing nowhere, and they brought me back. A massive thanks to my team-mate Jean-Eric Vergne too. He’s a hard competitor, but he has helped me out a lot and it’s also thanks to him that I was able to be so quick straight away in this team.

“We had a game-plan, and we executed it perfectly today. JEV and I have helped each other out. We were pushed all the way and it was super intense at the end. I had to cover JEV and I had to cover myself a few times too. It was pure teamwork."