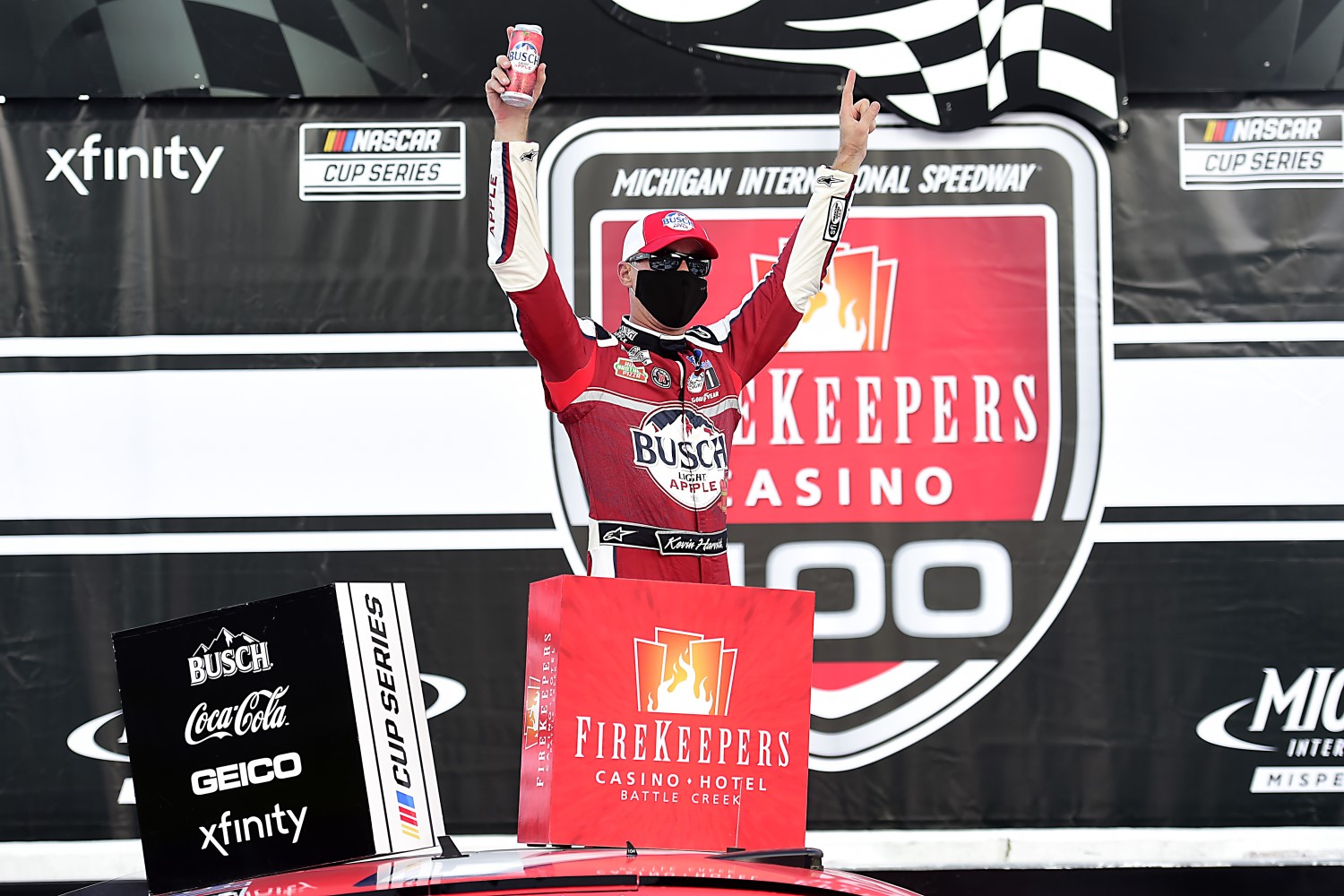 Harvick’s red car was out front the majority of the afternoon, leading a race-best 92 of the 161 laps, but five restarts in the final 30 laps – including an overtime finish – forced Harvick, 44, “The Closer" to close out the win. It marked his fifth victory of the year, tying him with Denny Hamlin for most in the series in 2020.

“This was just an awesome car to drive today," Harvick said. “I think the confidence is high when we come to Michigan anyway. It’s a racetrack that’s been really good to us and for whatever reason just fits our style of cars, everything we do with our cars at Stewart-Haas Racing.

Harvick swept both stages, banking two playoff points for use in the 10-race postseason, which begins next month. His final pass for the lead was a close-quarters one with Busch on Lap 148, a move that took the air off the rear of the No. 18 Toyota and nearly forced Busch into the outside wall in Turn 4.

From there, Harvick survived a handful of late-race restarts and held off Keselowski in the two-lap overtime dash.

“It was a heck of a battle," said Keselowski, who was hoping to become the first Michigan native to win a NASCAR Cup Series race at the state’s famed 2-miler. “Just not quite strong enough to keep up with Kevin.

“Kevin is just super-fast on the straightaways and doesn’t give up anything in the corner. We’ve got some work to do."

Keselowski was referring to an immediate opportunity – the second half of this Michigan doubleheader weekend, which features another scheduled 156-lapper Sunday, the Consumers Energy 400 (4:30 p.m. ET on NBCSN/NBC Sports App, MRN and SiriusXM NASCAR Radio).

The lineup for Sunday’s race will be set by inverting the top 20 finishers from Saturday’s results. That means 20th-place Chris Buescher and 19th-place Clint Bowyer will start on the front row.

Perhaps one of the biggest challenges Saturday was a new element introduced by NASCAR and debuting at Michigan – the choose rule – which allows drivers to pick whether they want to line up in the high or low lane on restarts. The feature got a high-profile, much-tested start with so many restarts in the final laps and was by most accounts post-race a popular addition.

It created another element of drama on the restarts and forced Harvick to ward off his chief challengers time and time again to earn a shot at hoisting the big trophy.

“Felt like we had a fast car," said Busch, the reigning series champion who is still looking for his first victory of the season. “But it was the best of the rest. The four-car (Harvick) was lights out. He deserved to win the race. It was a race for second today."

Harvick continues to lead the championship standings with 10 of the 16 playoff positions already taken by 2020 race winners. Only 16 points separate 16th-place William Byron – who finished 14th – from 17th-place Erik Jones, who finished 11th after running top 10 most of the day.

Tyler Reddick is 19 points behind the cutoff line, and retiring seven-time NASCAR Cup Series champion Jimmie Johnson is only 22 points back.

The start was delayed nearly an hour to avoid overlap with the finish of the NASCAR Xfinity Series race at Road America. The Xfinity Series event – won by Team Penske’s Austin Cindric – was halted for roughly 90 minutes because of lightning strikes in the vicinity of the Wisconsin road course.

Note: Post-race inspection was clear in the NASCAR Cup Series garage without major issue. The No. 11 Joe Gibbs Racing Toyota driven by Denny Hamlin was found with one lug nut not safely secured in a post-race check.