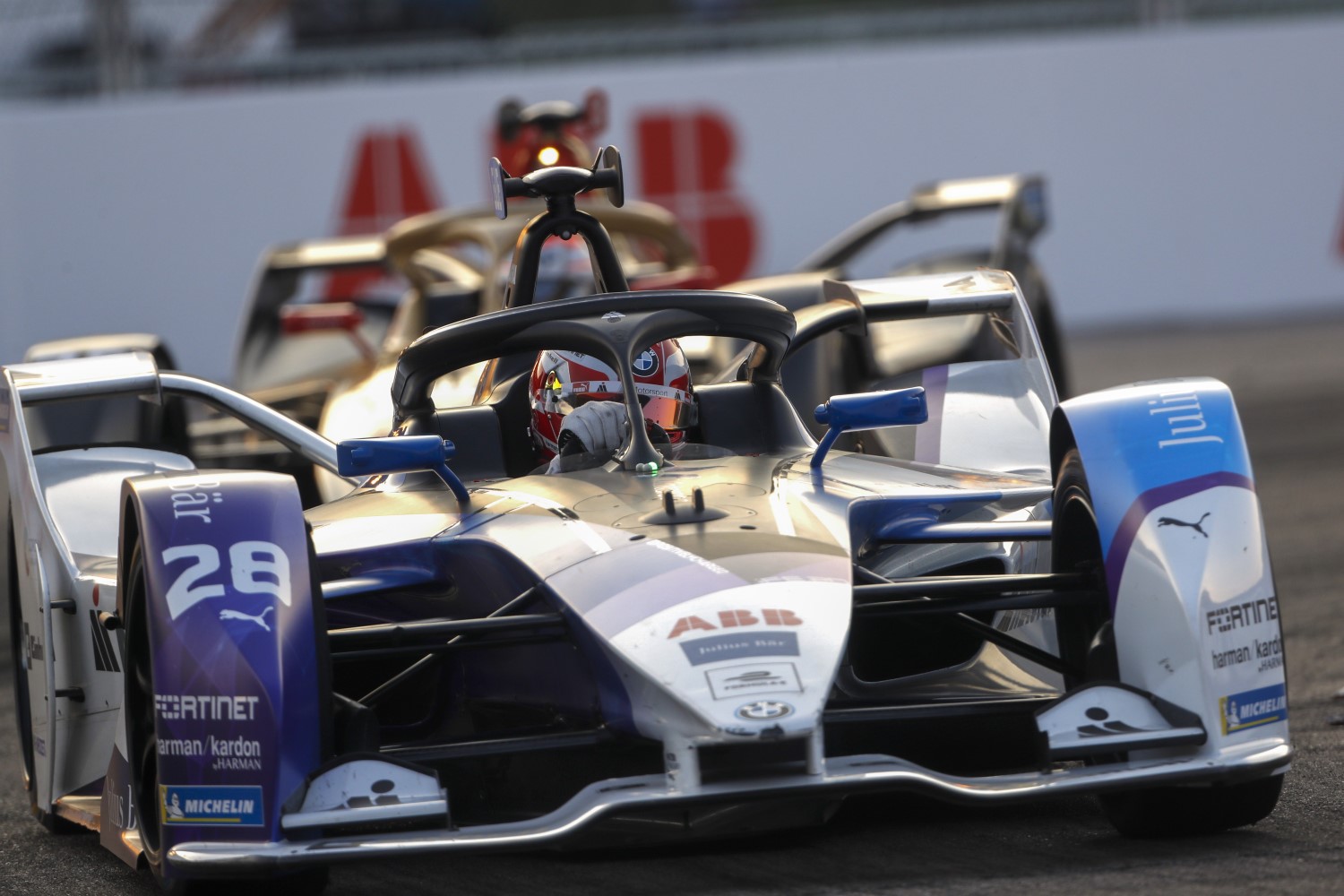 BMW i Andretti Motorsport’s Max Guenther crossed the line just a tenth-of-a-second ahead of Robin Frijns (Envision Virgin Racing) to take narrow victory in the Berlin E-Prix Round 8, on home turf for both team and driver, whilst pole man Jean-Eric Vergne brought his DS Techeetah home third.

Guenther’s second win of the season was enough to elevate him from ninth to second in the Drivers’ standings whilst fourth for Antonio Felix da Costa (DS Techeetah) saw him retain his advantage to the tune of 68 points with 90 left to play for.

Polesitter Vergne launched well off the line, as did the pair of Mahindras. Jerome D’Ambrosio surprised Guenther, slipping up the inside of the iFE.20 at Turn 1, with team-mate Alex Lynn looking to follow. Elbows out from Guenther kept the Brit at bay, however, and within a lap he’d retaken second from D'Ambrosio.

Mercedes-Benz EQ’s Stoffel Vandoorne was the big loser in the opening throes – falling from fourth to seventh after overcooking a stop into the hairpin, allowing Robin Frijns then Alex Lynn past. The Envision Virgin Racing driver made good progress from there and with Lynn quickly dispatched for fourth, he made a move stick on his team-mate for third.

Track and air temperatures had climbed since the middle of the week as a heat wave swept across Europe. Tires and batteries would require a little more care to be kept within their ideal operating windows, with the extra strain of dealing with the heat falling squarely to the drivers themselves from the confines of the cockpit.

With the scrap going on behind over the opening laps, Vergne was able to check out and pull away. He had managed things well through the initial quarter, gaining a percentage-point of energy in-hand over the chasing group.

Once Guenther had clear air, however, he put the hammer down and reduced the DS’ lead gap to less than a second – a massive uptick in performance overnight from the Bavarian squad which had struggled at the nine-day six-race season finale prior to today’s action.

On the cusp of the points, Lucas di Grassi (Audi Sport ABT Schaeffler) became the first to activate ATTACK MODE. The 35 kW power boost helped him by ROKiT Venturi Racing’s Felipe Massa for 10th but his compatriot wouldn’t make it easy.

With di Grassi trying to put the squeeze on his compatriot into the hairpin, the Venturi driver was having none of it, jumping inside the Audi with a nudge, leaving di Grassi sliding down the order to 13th.

On the 15-minute mark, a coming-together between Alex Sims (BMW i Andretti Motorsport) Sergio Sette Camara (Geox Dragon) saw James Calado (Panasonic Jaguar Racing) and Neel Jani (TAG Heuer Porsche) all tangled up through little fault of their own and forced the BMW i8 Roadster safety car into the fray.

On the restart, with 22 minutes to run, Vergne and Guenther leapt away. The BMW driver opted for ATTACK MODE, which boxed him in back in the pack and allowed the Frenchman to hit the activation zone on the next tour whilst retaining his lead.

The battle for fourth was about as intense as it gets a little further back between D’Ambrosio, Oliver Rowland (Nissan e.dams), Massa, Lynn and da Costa and Vandoorne. The Belgian came off worst, with a puncture that halted his charge and effectively ended his race.

Meanwhile, the standings leader sold Lynn the dummy to pinch eighth at the hairpin before going three-wide with Lotterer and Massa to take seventh at the same spot a lap later.

Massa’s earlier move on di Grassi was adjudged to be overzealous by race control, which penalized the Brazilian with a drive-through penalty, sending him way down the order to 20th having worked his way up as high as sixth.

Round two of ATTACK MODE saw Vergne able to narrowly retain his advantage, though the tables had turned with Guenther now counting an extra percent’s worth of energy in reserve.

Vergne had the BMW strapped to his diffuser from there, waiting for the perfect opportunity to pounce. The DS driver fended Guenther off at turn one heading into the final five minutes. Half way around the same lap, the BMW man got the run up the inside of Turn 7 to snatch the lead.

From there, Guenther pulled clear, and having spent most of the race minding his own business in no man’s land a second clear of the battle for fourth and a second behind the lead pair, Frijns found himself able to slice past Vergne’s DS for second and in with a shout of the race win.

Guenther held firm to take the checkered flag with the Dutchman a close second. Vergne staved off the attentions of his team-mate who tore through the pack to an eventual fourth, with Lotterer for company. Rowland rounded out the top six.

“It was important to qualify on the front row near the top guys," said Guenther. “It was a tough race and we managed it well and kept cool – taking the ATTACK MODE early on both occasions.

“We made the move on JEV and Robin (Frijns) was able to get a bit of a run on us but we held on. I knew the guys behind had slightly more energy than us, so I had to make the pass on Vergne as early as I could.

“I was never going to give the win up on the last lap!"

Da Costa’s advantage at the top of the Drivers’ Championship stands at 68 points with 90 left in play over the remaining three rounds. Guenther now finds himself second whilst DS Techeetah head BMW i Andretti in the Teams’ table by 70 points.

"It was important to qualify on the front row, or at least close to the top drivers. The race was very close until the end, and we managed it very well. We dropped one place at the beginning, but we kept cool and recovered the position. Robin came from behind and I knew he had more energy. So, I had to be quick to make the move on JEV and it paid off. I’m incredibly happy for the team, myself and everyone to win this home race here in Berlin!"

"It feels really good to be back on the podium. It’s my first time this season, which has been quite a strange one so far, but we had a good race today. We were really good on energy halfway and also at the end. Guenther and JEV were fighting a lot and when that happens you sit back and see what comes next. I knew I could overtake at the end, so I tried to save as much energy to make it to the finish line. I’m pleased with the result today. The team did a good job and I’m really happy to be back."

"We did good to get a podium finish today. I don’t know what happened, but we need to investigate on the energy management after taking ATTACK MODE, since that made me struggle quite a lot at the end of the race. I was fighting with Max for the lead but when I saw Robin coming, I thought it was useless fighting, as that would have meant losing the podium for me. We still have some work to do ahead of tomorrow to win the race. But it’s good to be back on the podium."