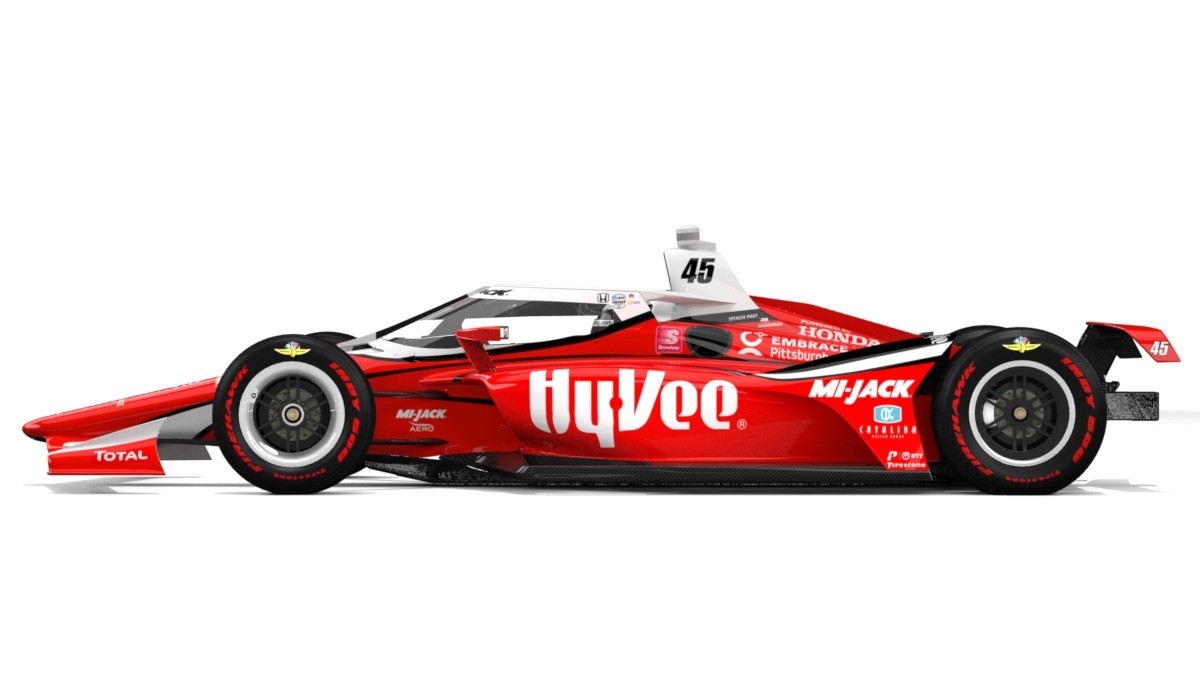 Rahal Letterman Lanigan Racing (RLL) announced today that Hy-Vee, Inc., an employee-owned supermarket chain that operates more than 275 retail stores across eight Midwestern states, will be the primary sponsor of Spencer Pigot’s No. 45 NTT INDYCAR SERIES entry at the 104th running of the Indianapolis 500 on Sunday, August 23. Hy-Vee will also be an associate sponsor of Graham Rahal’s entry for the Indy 500. Rahal finished third in the Hy-Vee Honda in Race 2 of the Iowa INDYCAR 250s on July 18.

“We are excited for the opportunity to build on the success our partnership with Hy-Vee produced at Iowa Speedway when Graham earned his second podium finish of the season with third place," said Bobby Rahal, team co-owner of Rahal Letterman Lanigan Racing along with David Letterman and Michael Lanigan. “It’s great to be able to expand on that and have Hy-Vee join us as the primary on Spencer Pigot’s entry. Spencer already had one impressive race at Indianapolis Motor Speedway this year and we have high expectations for more of the same at the Indy 500. Much like the fans of Indy car racing, Hy-Vee has a loyal customer base and we appreciate their support as we prepare for the Greatest Spectacle in Racing."

“This year, the 104th Indianapolis 500 will set records with the number of fans watching it from their homes, and when the opportunity to be a part of it became available, we immediately knew we wanted in on the excitement," said Randy Edeker, Hy-Vee’s Chairman of the Board, CEO and President. “While Hy-Vee mainly has a presence in eight Midwestern states, our company and our customer base spans across the country. With subsidiaries and employees located throughout the nation, we look forward to supporting racing fans with our sponsorship of Spencer Pigot and Graham Rahal’s entries at the Brickyard."

Orlando, Florida native Pigot, 26, earned back-to-back championships in 2014 and 2015 in the INDYCAR Ladder Series with his 2014 Pro Mazda championship and 2015 Indy Lights title. He made his NTT INDYCAR SERIES debut with RLL in 2016 in the St. Petersburg season opener and also competed in the INDYCAR Grand Prix and Indy 500 at Indianapolis Motor Speedway with the team. He made an additional seven starts for Ed Carpenter Racing (ECR) that year and joined ECR fulltime from 2017-2019 with a career best start of third place at the 2019 Indy 500 and career best finish of second place at Iowa Speedway in 2018. At the 2020 GMR Grand Prix at IMS with RLL, Pigot led the race and looked likely to earn a podium finish until he retired from the event after a mechanical failure.