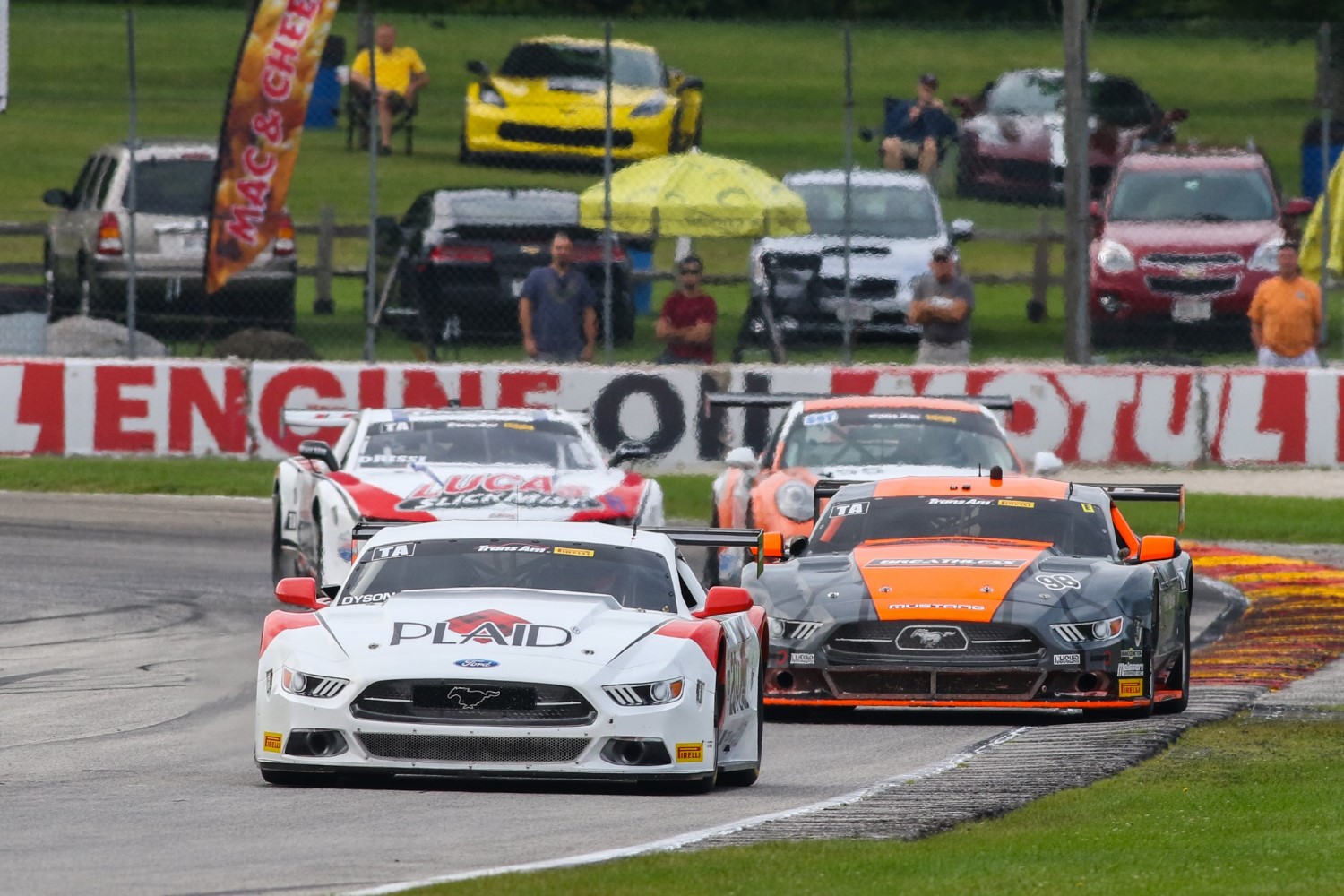 Road America is one of Chris Dyson’s favorite racetracks, and it’s never wise to bet against the veteran racer any time he appears at the classic 4.048-mile classic road racing circuit in Elkhart Lake, Wisconsin. Dyson has won there in IMSA Le Mans Prototypes for Mazda and for Bentley in the Pirelli World Challenge – and this past weekend you’d have made a lot of money putting all your chips on him. Dyson put his #20 Plaid Ford Mustang on the pole and then led every inch of the 100-mile Trans Am sprint race.

Driving the No. 20 Plaid Ford Mustang, Dyson held off Ernie Francis Jr. to win by 8.19-seconds for his fifth career victory, and first since beating reigning champion Francis Jr. in the 2019 season finale at Daytona as the duo fought for the title.

Dyson was on his second engine of the weekend, having lost power shortly after taking the checkered flag in his pole-winning qualifying session on Friday. The team spent much of the night installing the new engine.

"The car was absolutely fantastic the whole race, from start to finish." Dyson said. "The Plaid Mustang was brilliant and our Pirelli tires were strong the whole way. I never went faster than necessary to keep a safe lead, although I got a bit nervous on the last restart, because you can never take anything for granted in this series. We came here to win, and this was big for the team."

Because Road America is such a long track and Trans Am qualifying sessions are brief – 20 minutes this weekend – there’s not much time to make adjustments. The driver has got to be ready and the car’s set up close to perfect when the green flag drops. Dyson, who won the pole here last year (but crashed in the race after experiencing brake failure at Turn 5) set his pole-winning time of 2:05.489 on just his second flying lap.

“It’s never easy to get pole in the Trans Am Series," said Dyson. “The drivers up front will always keep you honest. We arrived here with the Plaid Mustang ready to go.

“At the end of the qualifying session – with just enough time left for one flying lap – we stopped in the pits to bleed the tires down," Dyson said of his qualifying strategy. “We thought we were going to have to counter Tomy (Drissi, who ultimately qualified second) and Ernie (Francis, Jr.), but it turned out we had a good enough set up right away for pole."

Francis Jr. took second on the last lap, 13.129-seconds behind in the No. 98 One South Florida Wealth Advisors Ford Mustang when Tomy Drissi spun in Turn 9 while making a final bid to catch Dyson. Francis ran second in the early going before encountering mechanical problems which plagued his team throughout the weekend.

"We had a really tough weekend here at Road America," said Francis Jr. "It didn't really have the reliability that we wanted and just had a bunch of issues that we've been fighting. Just have to say thanks to my Breathless Racing team, they've sticking it through no matter what. We barely made any of the practice sessions and went out late for qualifying. We thought we finally got the One South Florida Wealth Advisors car sorted for the race. The car was strong at the beginning, but we had an electrical gremlin that shut down a cylinder in the engine about mid-way through the race, and we fell off the pace a little bit. Can't be too upset though about a second-place finish."

Drissi ran the fastest lap of the race – 2:06.655-seconds – and was bidding for his second-consecutive victory. However, he fell all the way back to sixth on the final lap in the No. 8 Lucas Oil Chevrolet Camaro following his spin.

“The car started coming into us late in the race, so when I saw that full course yellow I thought 'Hey man we can take this race,'" Drissi said. “Dyson got a good restart, but I started reeling him in going into Turn 5 and Turn 6, thinking I could pressure him into a mistake. Then at the same time, I should have thought of big picture. With Ernie behind me we would have been tied for the championship right now. I am just bummed out right now. It's just a frustrating thing for the whole team."

"I am happy with my podium finish today at my home track, it's nice to be driving with Trans Am again," said Ebben. "Like they always say, it’s better to be lucky than good, and today I was lucky. After the first few laps I was out there all by myself, so it wasn't too eventful, but it was fun at the beginning and at the end, just like it should be."

Ebbens was followed by Simon Gregg in the No. 59 Derhaag Motorsports Chevrolet Camaro and Wisconsin-native Denny Lamers in the No. 66 Stumpf Ford/McMahon Group Ford Mustang. Lamers was the TA Masters class winner.

It was a brief and heartbreaking day for Amy Ruman. Her No. 23 McNichols Company Corvette stalled on the start. She took the green on pit road but broke the transmission and was towed to the paddock without completing a lap.

There was a brief caution coming out on Lap 2 for the stopped No. 15 Franklin Road Apparel Audi T8 LMS Ultra. Francis Jr. took second from Drissi on the opening lap, and then challenged Dyson for several laps following the restart. Drissi was running a strong third, but encountered traffic at tough locations on several instances to slow his progress.

The complexion of the race changed just before halfway when two class contenders went out on the 12th lap. Lou Gigliotti’s No. 28 G2 Performance Corvette lost a tire while running second in SGS. Moments later, Erich Joiner’s XGT pole-winning No. 10 Championship Coffees and Tool Porsche 911 GT3.R dropped out while leading the class.

That turn of events opened the door for Ken Thwaits, who led the rest of the way for his second career – and second consecutive – XGT victory in the No. 5 Franklin Road Apparel Audi R8 LMS Ultra.

"These are long races, and anything can happen," Thwaits said. "All I was trying to do was run as hard as fast as I could and hang around until the end to bring it home. It wasn't a very tiring race. I am fresh as a daisy and can do it again if someone asked me to!"

Saunders swept to his 11th career victory and third SGS triumph of the campaign in the No. 84 Landsearch LLC Dodge Viper.

"We really pushed hard all weekend, and we are really proud to be here," Saunders said. "It was exciting to take the win here at Road America."

Gigliotti’s problems left Saunders with a four-second lead in SGS. Adrian Wlostowski ran second in the No. 96 F.A.S.T. Auto Ford Mustang for 10 laps before pulling off with a mechanical problem with five laps remaining, bringing out the second full-course caution. That elevated Carey Grant to second in the No. 6 Grant Racing 2 Porsche 911.1 GT3 Cup, followed by Milton Grant in the No. 55 Sentry Self Storage Porsche 911.1 GT3 Cup. Larry Bailey finished fourth in the No. 02 Logical Systems/Sam Pierce Chevy Corvette, and was the Masters SGT champ.

Rookie Tim Horrell scored his second GT class victory of the season in the No. 45 Breathless Racing Porsche GT4 Clubsport, placing 10th overall in the 21-car field. The Breathless Racing team spent the night fixing Horrell’s car, with the front end smashed in from an incident in qualifying. That team effort earned Horrell the Cool Shirt Cool Move of the Race.

"I want the thank the team for not giving up," said Horrell. "They worked long hours on the car to get it rebuilt. This is my first time here and the race went really well."