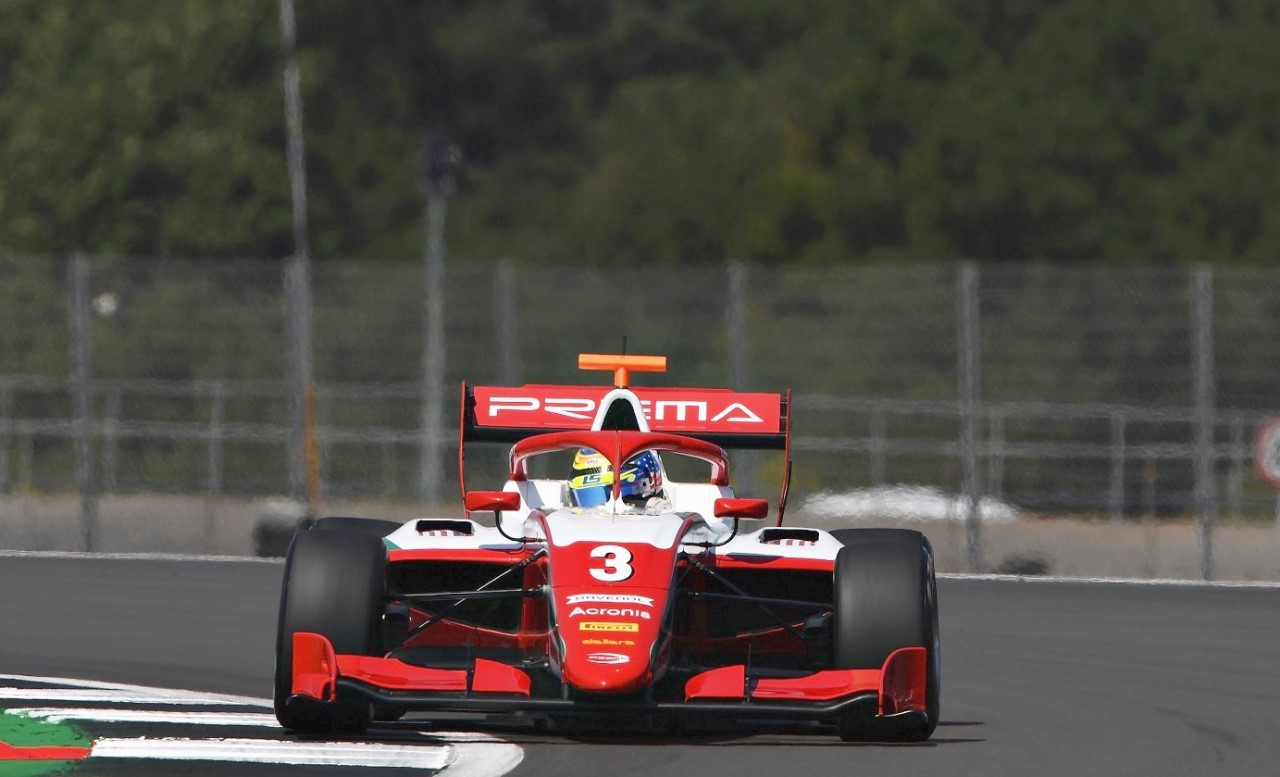 Logan Sargeant’s first ever FIA Formula 3 win was a big one. The American made it second time lucky from pole, coolly closing out a lights-to-flag win at Silverstone to take the Championship lead from teammate Oscar Piastri.

The PREMA racer had failed to convert pole to victory in the previous round – finishing third – but never looked in danger of suffering from the same fate this time around, finishing 1.5s ahead of the much-improved HWA RACELAB of Jake Hughes.

Liam Lawson brushed off a difficult start to the race to hang on to a podium place and keep his own Championship hopes alive.

Piastri may have lost the Championship lead, but the Australian will at least be satisfied to have made up four places from 11th, having retired from Qualifying early with mechanical issues on Friday.

Unlike in Round 4 though, Lawson did not. The Kiwi was under pressure as soon as the lights went out and surrendered second to Hughes at the first corner as the Briton flung his HWA RACELAB down the right-hand side of him. Frederik Vesti then attempted a similar move on the opposite flank but couldn’t make it stick.

Having already lost P2, Lawson was clinging onto third by the skin of his teeth. Hughes had scampered off into the distance and robbed Lawson of DRS. The Kiwi was at the front of a train that included Vesti, Théo Pourchaire and David Beckmann and was somehow keeping them at bay.

While Vesti remained patient, Pourchaire and Beckmann were keen to get a move on. Pourchaire saw a daring attempt to go three-wide with those ahead of him fail, opening him up to Beckmann and the German fired ahead at the Vale chicane.

Lawson’s careful tire management started to pay off as he began to break away from the train of drivers battling behind him. The Kiwi caught up with Hughes on Lap 16 and set the fastest lap as he began a to-and-fro with the HWA driver. Ultimately, Hughes’ experience at this level paid off, as the Briton switched to the defensive and held off the New Zealander.

Piastri made up for a miserable Friday afternoon with a sublime drive from 11th place. The PREMA racer made up three places inside the opening two laps, before darting ahead of Bent Viscaal in the closing stages.

The American’s win hands him the Championship lead by six points over Piastri, on 106. Beckmann remains in third on 74.5, followed by Lawson and Vesti. In the Teams’ Championship, PREMA continue to lead with 273.5 points, ahead of Trident on 111.5 and ART Grand Prix and 104 on Hitech Grand Prix are fourth ahead of MP Motorsport.

“I am extremely happy. It is my first win in F3, and I am glad that it came in a Race 1. A big thank you to PREMA, they have done a fantastic job all weekend so far and now we are going to focus on tomorrow and try and make up some positions."