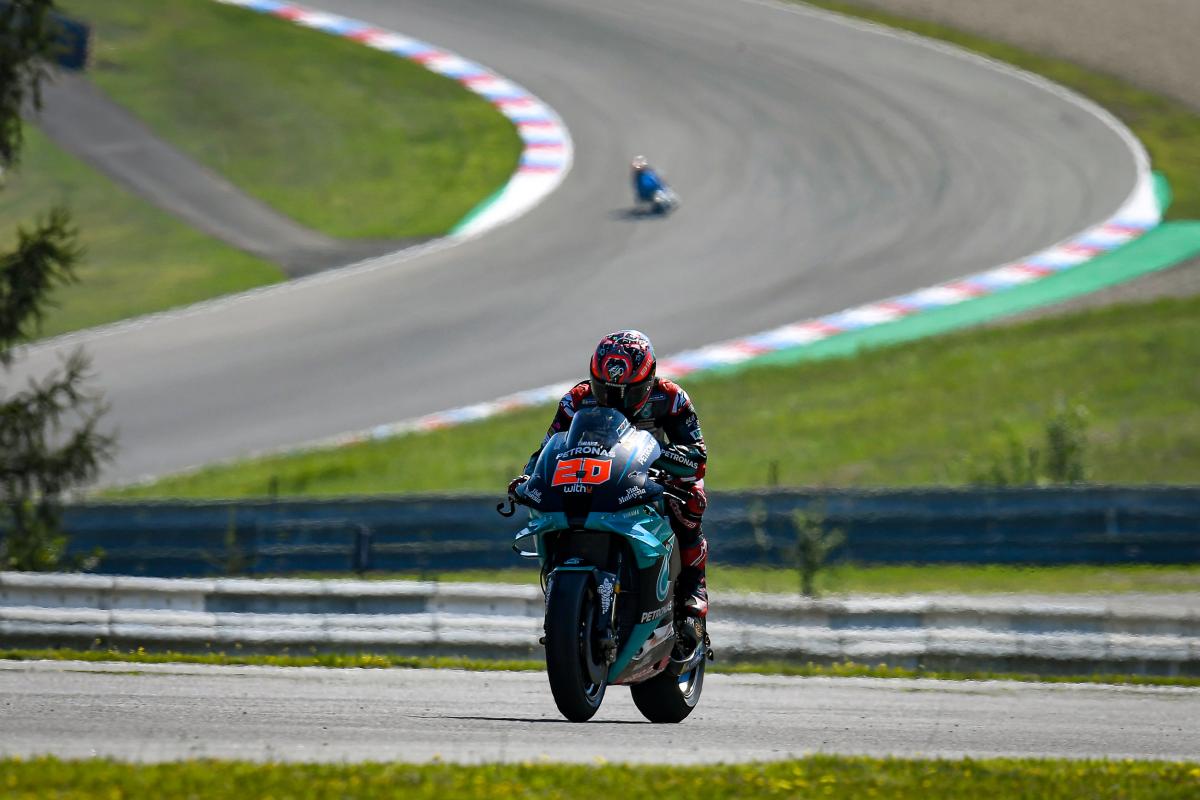 The Czech GP marks the start of the 2020 MotoGP World Championship’s first demanding triple-header, but there was no hesitation as the MotoGP teams busily got to work. Although conditions weren’t as hot as the previous two races, rising temperatures throughout the day saw the grip levels continue to change on the Czech track.

It was a Petronas Yamaha SRT 1-2 at the top of the Friday timesheets at the Monster Energy Czech Republic Grand Prix after Fabio Quartararo stuck in a last gasp 1:56.502 to edge out Franco Morbidelli by 0.007s. Miguel Oliveira (Red Bull KTM Tech3) completed a top three covered by 0.048s after the opening day of running sprung some surprises.

Second in the Championship Maverick ViÃ±ales (Monster Energy Yamaha MotoGP) crashed at Turn 13 in FP1, with many riders having plenty of shaky moments out there in both sessions. Quartararo was a frustrated figure for a lot of the afternoon session despite improving his FP1 time in the early stages. His usually smooth, on rails type style was nowhere to be seen as the Frenchman got his YZR-M1 bucking a weaving on more than one occasion – a very green surface wasn’t providing much grip.

Heading into the final 10 minutes, one of the satellite Yamaha riders was about to move the goalposts.

That man was Morbidelli. The Italian was out on fresh Michelin rubber and went over eight tenths clear on the combined times, which set off a chain reaction of riders suddenly going quicker than their FP1 times not too long after. Oliveira went second to sit less than a tenth off Morbidelli with Johann Zarco (Esponsorama Racing) – the Frenchman fourth fastest in FP1 – slotting into third. Plenty of riders went quicker inside the top 10 but with two minutes remaining, the Championship leader was outside the provisional automatic Q2 places.

Quartararo rumbled out of pitlane on new tires and with just the single lap to get the business done, El Diablo made no mistake. But his fastest time was only just quicker than his teammate, but that 0.007 was enough to ensure Quartararo leads the premier class field into Saturday’s action in Brno. Oliveira and Zarco were the two standouts on the opening day – the Portuguese rider leaping from P17 to P3 in the afternoon – as the KTM and Ducati riders sit ahead of ViÃ±ales in fifth.