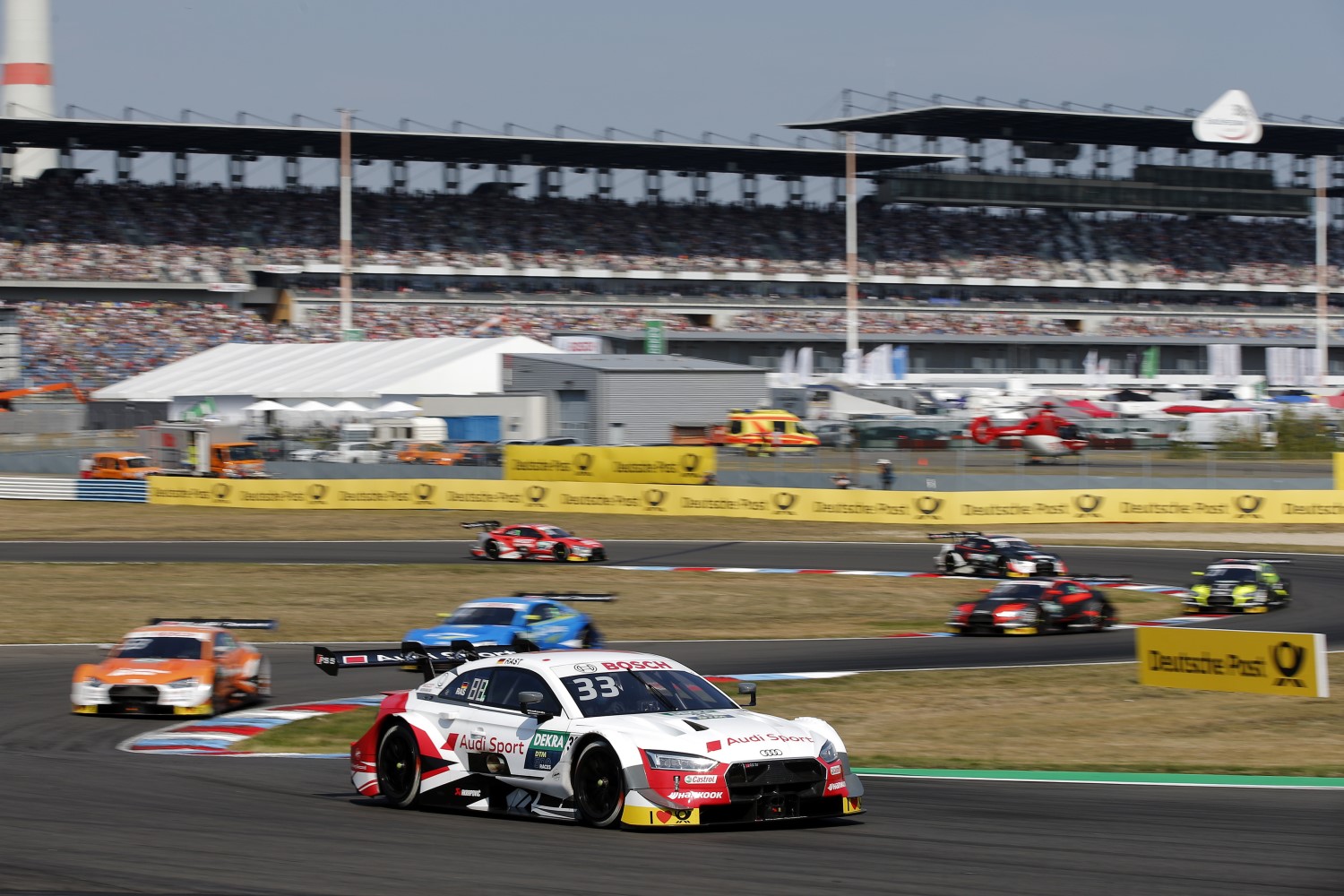 The DTM’s first double-header is imminent: at the Lausitzring, the 640hp strong cars of Audi and BMW will be taking upon each other during the second round this weekend (14th-16th August). Only one week later, the third round will follow at the same venue, albeit at a different track configuration. After the successful season opener of the leading touring car race series at Spa-Francorchamps in Belgium, last year’s runner-up Nico Muller (Switzerland) and Audi are the first points’ leaders of the year. Due to the covid-19 pandemic, spectators aren’t admitted in the Lausitz either. However, SAT.1 is broadcasting the races live on German TV (Saturday and Sunday from 13.00 hrs) while the new streaming platform grid.dtm.com is providing fascinating footage from selected sessions, various camera perspectives and coverage of the support series, live and on demand on the screens at home and on mobile devices.

During the season opener, Audi driver Nico MÃ¼ller underlined how serious he is about his title ambitions: victory in the first race, second place in the second race. At 46 points, the 23-year-old is leading the points’ standings from defending champion René Rast (39) and Briton Jamie Green (30). Currently, works drivers of the brand from Ingolstadt are locking out the first six positions. At the Grand Prix circuit in the Ardennes, BMW was clearly beaten. However, the Munich-based brand showed that it had improved in terms of reliability and top speed.

A matter of set-up: optimum traction required at the sprint circuit
At the Lausitzring, the encounter between Audi and BMW is taking place in different conditions. At Spa, aerodynamic downforce was the main issue while at the 3.478 kilometers long Lausitzring sprint circuit, mechanical grip is the main requirement in the numerous tight and rather slow corners. Another factor are the notorious bumps that are not so easy to deal with, both for the engineers while setting up the suspension and for drivers and the equipment on the race distance.

The races at the Grand Prix circuit in the Ardennes already produced numerous overtaking maneuvers throughout the field, but the sprint circuit near Klettwitz, south of Berlin, is a guarantee for spectular outbraking maneuvers. At Spa, with its ultra-fast corners and compressions, the load on the tires was huge. Lausitzring, meanwhile, requires different qualities from the control tires supplied by partner Hankook due to its high traction level. However, like at Spa, one thing is certain: only those who get the tyre management right throughout the distance and who has opted for a tire-saving car set-up will be rewarded with championship points.

Lucas Auer: two-time Lausitz race winner best-placed BMW driver in the standings
A driver to have been on the top step of the podium at Lausitzring twice already is Lucas Auer. In 2016, the Austrian scored his maiden DTM race win at the sprint circuit and repeated his success one year later. The Lausitzring is the home circuit of the Mucke team from Berlin he raced for at the time. For the 2020 season, Auer made his comeback in the DTM. At Spa, the 26-year-old made his first mark and is now heading east as the best-placed BMW driver in the standings, ahead of his compatriot Philipp Eng, Sheldon van der Linde and ex-Formula 1 driver, Timo Glock.

DTM with a new record: 302km/h at the Spa Grand Prix circuit
Among the DTM rookies, young Swiss Fabio Scherer in particular left an impression during the season opener. The 21-year-old looked well on course to secure his maiden championship points until his tires quickly degraded with three laps remaining, so that he still has to open his points’ account. Nevertheless, Fabio Scherer, who made the transition from single-seaters to the Audi RS 5 DTM, has already written DTM history. At the Spa Grand Prix circuit, he became the first DTM driver to crack the 300km/h barrier. At the end of the day, Scherer, Harrison Newey (Audi) and Philipp Eng (BMW) all had achieved a top speed of 302km/h.

Little time, a lot of work: teams and drivers remain at Lausitzring
Unlike the Spa season opener, where practice, qualifying sessions and both races were jam-packed into two days, the DTM weekend will return to its usual schedule at Lausitzring with a pair of free practice sessions on Friday and one qualifying and a race (start at 13.30 hrs) each on Saturday and Sunday. After that, all the teams and (almost) all drivers remain in the Lausitz region until the next event. While the teams will get the spectacular touring cars with their powerful, yet efficient two-litre turbocharged engines back in excellent condition within the shortest time, the drivers will complete their usual fitness program and also work together with the engineers to improve the set-up for the 4.570 kilometers long Grand Prix circuit, the technical challenge for the third DTM season round.

Spectators planned for fourth DTM round at Assen
At Lausitzring, the DTM again will have to make do without the direct support from fans on-site. However, the organizing ITR is confident that spectators will be adding to the colorful DTM fascination on the grandstands pretty soon again. According to the current planning status, 10,000 spectators each on Saturday and Sunday will be admitted for the fourth season round of the 2020 DTM at Assen in The Netherlands, 4th-6th September (tickets can be ordered at 49 Euros from the DTM Ticket Shop tickets.dtm.com or from the DTM-Ticket hotline +49 1806 386 386). Further DTM events are to follow this example.

Gerhard Berger, Chairman ITR e. V.
“Now, it is stroke upon stroke in the DTM. Three double header events at Lausitzring, at NÃ¼rburgring and at Zolder, that is quite tough for drivers and teams. Of course, like in any other sport, we are missing the spectators, our fans. As a result, the joy about being able to welcome spectators again for the fourth DTM round at Assen is all the bigger. We can hardly wait for the fans to return as they incorporate the unique flair of the DTM. And we are working hard to ensure that the grandstands at other race tracks can be re-opened, too."

Mike Rockenfeller, Audi Sport Team Phoenix
“I have enjoyed every single lap at Spa and I am super happy that the DTM season has started. Finally, we are racing again and from now on almost every weekend. That comes with new experiences for me as well. My team and I will be staying at the race track throughout the week. There is much to do on the cars and with the engineers. Lausitzring is tricky and not quite my favourite circuit. However, both track configurations are good for overtaking. Personally, I slightly prefer the longer lay-out. Things didn’t go quite as planned for me at Spa, so I hope we have drawn the right conclusions. I think it will be a hot weekend in every way."

Lucas Auer, BMW Team RMR
“I have a very special connection with Lausitzring. When racing for Peter MÃ¼cke’s team, I did a lot of testing there in Formula 3 and in touring cars, and it is where I scored my maiden DTM race win. I like both configurations, both provide good opportunities for overtaking, particularly the longer circuit. After Spa, I was basically happy, the qualifying sessions and the races went quite well for me. But all BMWs weren’t fast enough. That is what we are working on 24/7, to improve. I think that the Friday with its two free practice sessions will be very important for us."

Fabio Scherer, WRT Team Audi Sport
“Taking Eau Rouge flat out is always something special. When you position the car in the right way, you carry a lot of momentum for the uphill straight. I only found out after the race that I had broken the DTM speed record at Spa. After my transition from single-seaters, I have learned a lot in my first touring car races and even came close to scoring my first championship points. The fact that we have Friday practice sessions back at Lausitzring is helpful for me. For me as a DTM rookie, all the races are a new challenge."