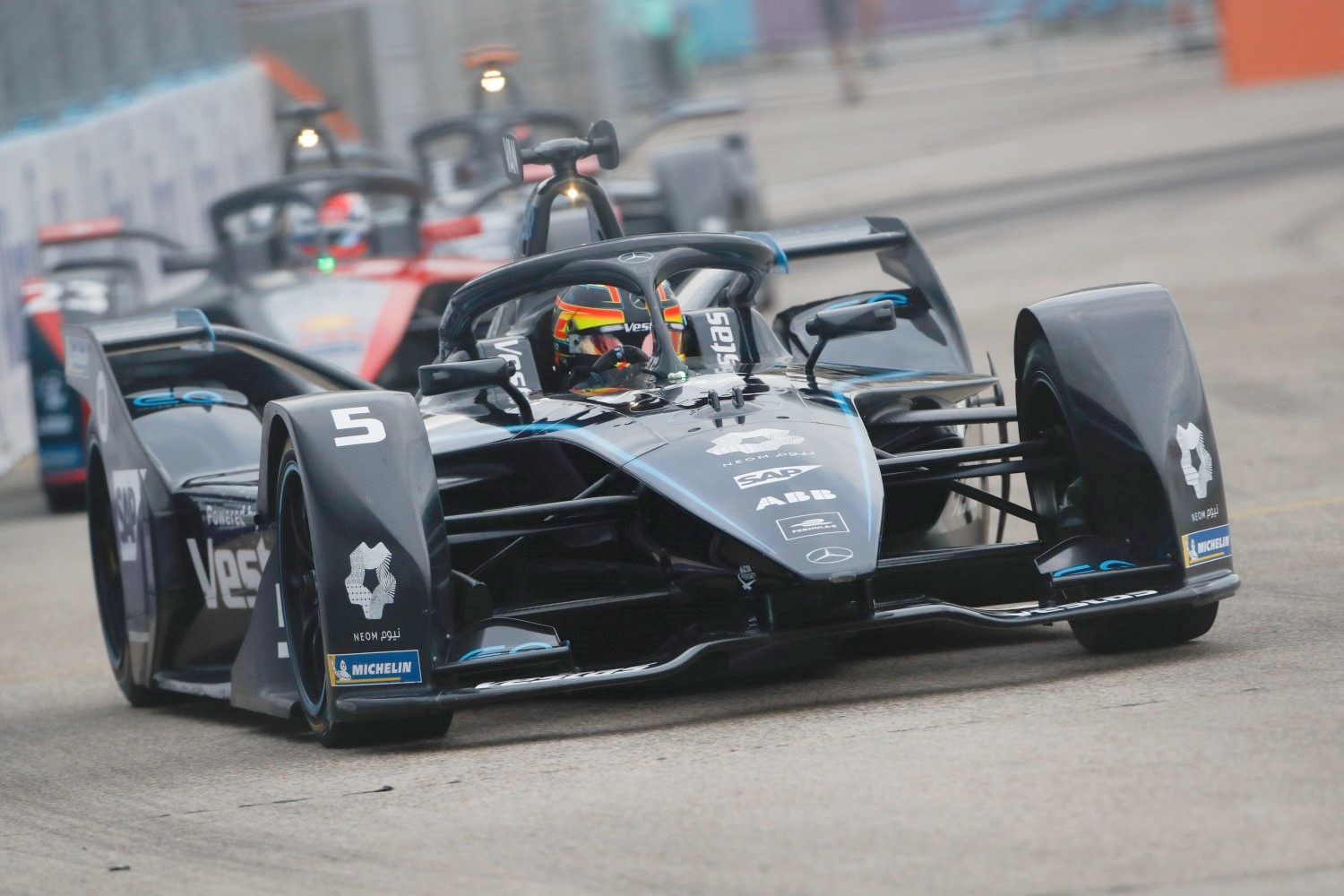 Stoffel Vandoorne led home a stunning 1-2 for Mercedes-Benz EQ in Round 11 of the 2019/20 ABB FIA Formula E Championship for his first win in the series, with team-mate Nyck de Vries following second and Sebastien Buemi (Nissan e.dams) third.

Third for the Swiss was enough to ensure Nissan e.dams would follow home DS Techeetah in the Teams’ Championship, with Mercedes-Benz EQ winding up third, and the best-placed of the German giants.

“What an incredible race. It was perfect for us,” said Vandoorne. “Seb (Buemi) was always close but we felt we had him in control. We couldn’t have hoped for any better a way to end the season, and second in the standings is a real bonus.

“To execute our race pace from the lead is something new and I’m super happy we managed to pull it off. The whole team has done a fantastic job. I struggled in qualifying in the last couple of races but everything was picture perfect today.”

Post-race, Da Costa and DS Techeetah were crowned Drivers’ and Teams’ title-winners at the post-race Champions’ Podium, having secured the honors at the end of Round 9 on Sunday in Berlin.

It was an even start out front with the status quo retained among the leaders as Vandoorne led away from Julius Baer Pole Position and strode to a 1.6-second lead by the end of lap one. Nyck de Vries, meanwhile, (Mercedes-Benz EQ) was able to take third from Audi Sport ABT Schaeffler’s Rene Rast in the first sector on lap one.

Jean-Eric Vergne (DS Techeetah) and Alex Sims (BMW i Andretti Motorsport) gained the most ground in the opening moments, moving up three positions apiece to 18th and 12th respectively.

De Vries was the first to jump into the ATTACK MODE activation zone, profiting instantly by pinching third from Rene Rast (Audi Sport ABT Schaeffler) and then second from Sebastian Buemi (Nissan e.dams) on lap nine.

It was looking good for Mercedes-Benz EQ with 30 minutes plus one lap left to run, with its sights set on the best possible outcome in the Teams’ standings and each of the top three of Vandoorne, de Vries and Buemi having hit the activation zone.

As it stood, Vandoorne was good for second in the Drivers’ Championship, too, as current occupant Oliver Rowland (Nissan e.dams) had struggled only as far as 19th on lap 14 from the back of the grid.

It was four into one in the scrap for fourth, just outside the podium positions. Rast headed Robin Frijns (Envision Virgin Racing), Edo Mortara (ROKiT Venturi Racing) and Alex Lynn (Mahindra Racing) – all fighting in close company.

The second round of ATTACK MODE saw the lead few cover each other’s strategies, with Buemi briefly taking the lead having made the jump to activate a lap later than the Mercedes-Benz pair out-front – Vandoorne leading the way with 17 laps now crossed off.

Rast, Frijns, di Grassi, Lynn, Mortara, Bird and Sette Camara occupied the top ten at the half way stage, with six seconds between them. Vergne was still the man from group one in qualifying making the best progress, just two positions back from the points – knowing that he’d need sixth as it stood to secure second.

Inside the final 20 minutes, and the battle for second in the Drivers’ table swung Buemi’s way, with the 2015/16 champion poaching second from de Vries, though his team pointed out over team radio that the Dutchman had two percent of his usable energy in hand over the Nissan driver.

Di Grassi was striding forward, making maneuvers on Lynn and Mortara stick for sixth as his experience started to tell – and with two lots of 35 kW ATTACK MODE boosts, as well as his FANBOOST, still left to utilize.

The Brazilian pulled his trademark squeeze into Turn 1 as he tried to slice by Frijns but the Dutchman held firm despite the Audi running 35 kW to the good in ATTACK MODE.

Vandoorne had the race in control 1.5 seconds clear out front with 10 minutes plus a lap on the clock, but team-mate de Vries started to look feisty – all over Buemi’s diffuser in the battle for second. A big look into the final turn was met with a door slammed shut by the experienced Swiss but that wouldn’t be the end of the matter – as the Mercedes still held energy in hand.

Bird, fighting through from 14th, made good use of his second trip through the activation zone to seal sixth on lap 30, nipping past di Grassi shortly after dispatching Lynn. With Frijns fending off di Grassi, that meant Envision Virgin Racing looked to be troubling BMW i Andretti for fourth in the Teams’ table.

The Virgins swapped places to allow Bird to fly away in fifth as Frijns began fell away – di Grassi able to sweep by, throwing the dummy, into the final corner with three laps left. They clashed, however, and Frijns suffered an unfortunate puncture, which saw his efforts go unrewarded with a DNF.

De Vries made his energy advantage count to finally see off Buemi – meaning his team-mate and race leader would now pip the Nissan driver to second in the Drivers’ tally as well as head home the one-two.

Buemi took the flag third with Rast, Bird and di Grassi following to round out the top six, whilst Vergne fought from the back of the field to seventh – one more pass would have seen him second in the standings, such are the fine margins in Formula E. Lynn, Antonio Felix da Costa and Mortara completed the top ten.

MERCEDES-BENZ EQ STOFFEL VANDOORNE (BEL)
“That was pretty much the perfect race. To finish the season with a one-two for Mercedes, I don’t think we could have hoped for any better and to finish second in the championship is a bonus. We knew we had good race pace, we have been able to show that the last couple of races but to execute that from the front and to do that from the lead is still quite different and I’m super happy we pulled that off. It was down to the hard work of the team, everyone has done a fantastic job.”

MERCEDES-BENZ EQ NYCK DE VRIES (NLD)
“That felt like getting a monkey off my back. To do it on the last day here after a very long marathon, a very exhausting and mentally tough week where we’ve made mistakes as a team, I’ve made mistakes and to recover and to drive a race like this is very satisfying. At the end I was even closing the gap on Stoffel and it was clear that we had energy towards the end.”

NISSAN E.DAMS SEBASTIEN BUEMI (CHE)
“We weren’t quick enough today. I didn’t have the pace, we tried something new on the set-up and maybe it wasn’t the right way to go but at the end we still managed to have a podium finish and a clean race. I think I took ATTACK MODE at the wrong time, maybe if I had waited longer it would’ve been better. I’m happy for the team as we’re second in the team standings and that’s definitely a great achievement.”

The result ensured Vandoorne would follow champion da Costa in the Drivers’ table, with Vergne a close third. Buemi and Rowland were next for Nissan with di Grassi completing the top six spots as the curtain fell.

Nissan e.dams took second in the Teams’ running behind champions DS Techeetah. Mercedes-Benz EQ’s points-haul made sure of third, with Envision Virgin Racing edging out BMW i Andretti Motorsport for fourth.

Da Costa and DS Techeetah may have had it wrapped up with two rounds to play, but if this final double-header has shown us anything, it’s that they will be looking over their shoulders at every turn next season.