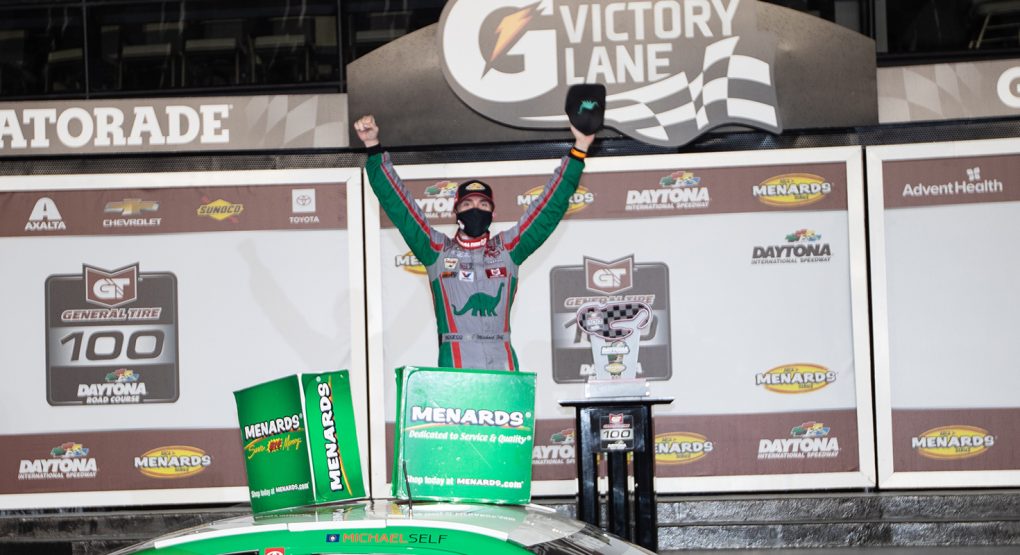 Michael Self has already proven he could conquer the superspeedway at Daytona International Speedway. Back in February, he won the season opener at “The World Center of Racing” for the second time.

Friday night, he added an historic first to his racing resume.

Self completed a unique season sweep in the General Tire 100 at the DAYTONA Road Course, conquering the 14-turn, 3.61-mile configuration in the ARCA Menards Series’ inaugural foray.

It marked the ninth career series win for the 29-year-old from Park City, Utah, who extended his championship points lead in the process. He also took over the Sioux Chief Showdown championship lead.

A faulty plug wire kept Self from taking a lap during the abbreviated practice session, which was cut short by weather. Lightning near the track also pushed the start of the race three hours, meaning in addition to wet conditions and a first-time event, the General Tire 100 would be run under the lights.

None of which slowed the race-long battle between Self and Ty Gibbs.

Self started second by virtue of the starting field being set by owners points in the Sioux Chief Showdown standings. Gibbs used a slick move in the backstretch chicane to take the lead on Lap 1 and held it until Self overtook him right before the halfway break. Gibbs would wrestle in back with 10 to go in the 28-lap event, but Self would not relent. He retook the point in the infield turns with six to go and pulled away for the win.

Self finished 6.993 seconds ahead of runner-up Gibbs.

Colin Braun, the former Rolex 24 winner and NASCAR Gander RV and Outdoors Truck Series driver, crossed the line third as a substitute driver for Sam Mayer. Mayer, who suffered a hand injury in a sports car wreck last week in Wisconsin, started the race and was relieved by Braun at the halfway break.

Taylor Gray finished fourth and Will Rodgers, who was fastest in practice, was fifth.

Hailie Deegan was sixth, followed by Max McLaughlin, Bret Holmes, Chandler Smith and Parker Chase. Smith entered the race as the Sioux Chief Showdown points leader and overcame an early off-course run and a spin later in the race to salvage a top 10.

Self leads Holmes by 15 points in the ARCA Menards Series. Drew Dollar and Deegan are both tied for third, 56 back of Self. And Self leads Smith by two points, Mayer by three and Gibbs by seven in the Sioux Chief Showdown, with Holmes in fifth, only 14 out of the top spot.

The series now head to WWT Raceway at Gateway in Madison, Illinois, on Saturday, Aug. 29. The race will be No. 13 for the ARCA Menards Series and seventh of 10 races for the Sioux Chief Showdown.