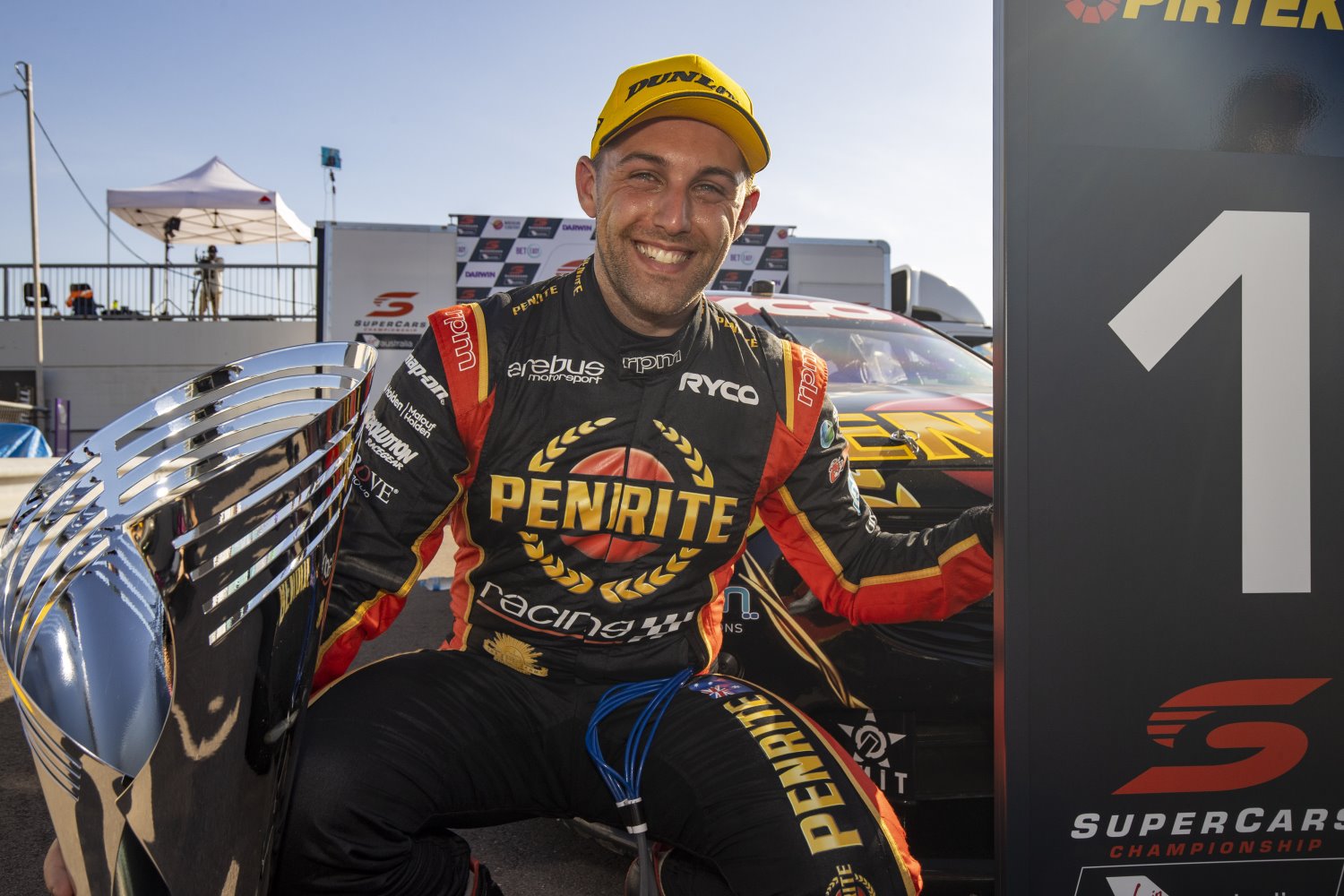 Rising Holden Penrite Racing star Anton De Pasquale cemented his place in history today as the 80th winner of a Supercars race in the opening leg of the BetEasy Darwin Triple Crown.

In his 71st career start, the man many tip to be one of the sport’s shining stars in years to come claimed his maiden race victory in a wild race at Hidden Valley.

“Obviously we threw everything at it today, which means we’re going to have a struggle tomorrow but that’s OK when you can talk about a win so it paid off,” said De Pasquale.

“We had a really good car, our cars are always good around here so it is good to get a result. The team has been begging for [a win] so it’s awesome.”

Boost Ford’s James Courtney, who sensationally walked out on Team Sydney after just one round, only to find a home at Tickford before racing resumed – claimed second, his first podium in a Mustang.

Scott Pye was third, his first podium since switching to Team 18 in the off-season. It was also the team’s first podium result since 2013.

Others who had a tough day at the office include recent race winner Nick Percat, who’s day ended when Shane van Gisbergen’s Red Bull Holden speared into Todd Hazelwood, who in turn pushed Percat off the circuit in the opening laps.

Percat was furious afterwards at the 2016 Supercars Champion:

“That’s actually laughable,” said a bemused Percat after seeing a replay. “He’s just having a Shane day where he doesn’t bleed out of the throttle obviously.”

Rookie Jake Kostecki was taken to the medical center and later cleared of injury after a high-speed crash into a tire wall midway through the race.

The results mean McLaughlin now leads Whincup by 101 points in the Championship, Chaz Mostert is third ahead of Tickford’s Cam Waters, David Reynolds is fifth.

Everyone will re calibrate tonight and reset for two more ARMOR ALL Qualifying Sessions tomorrow and two races, with the overall points leader after the tree races to be awarded the coveted Triple Crown trophy tomorrow afternoon.

Behind the leaders it was a chaotic day for Championship runaways Scott McLaughlin and Jamie Whincup.

Both received penalties for infringements – Whincup’s was for crashing into De Pasquale in pit lane after a stop. McLaughlin, who started from pole and led the Virgin Australia Supercars Championship by 107 points heading into today finished 20th after being pinged a 15-second post-race penalty for a race restart procedure infringement after a Safety Car.

Whincup crossed the line in third place but his penalty dropped him back to 17th place.