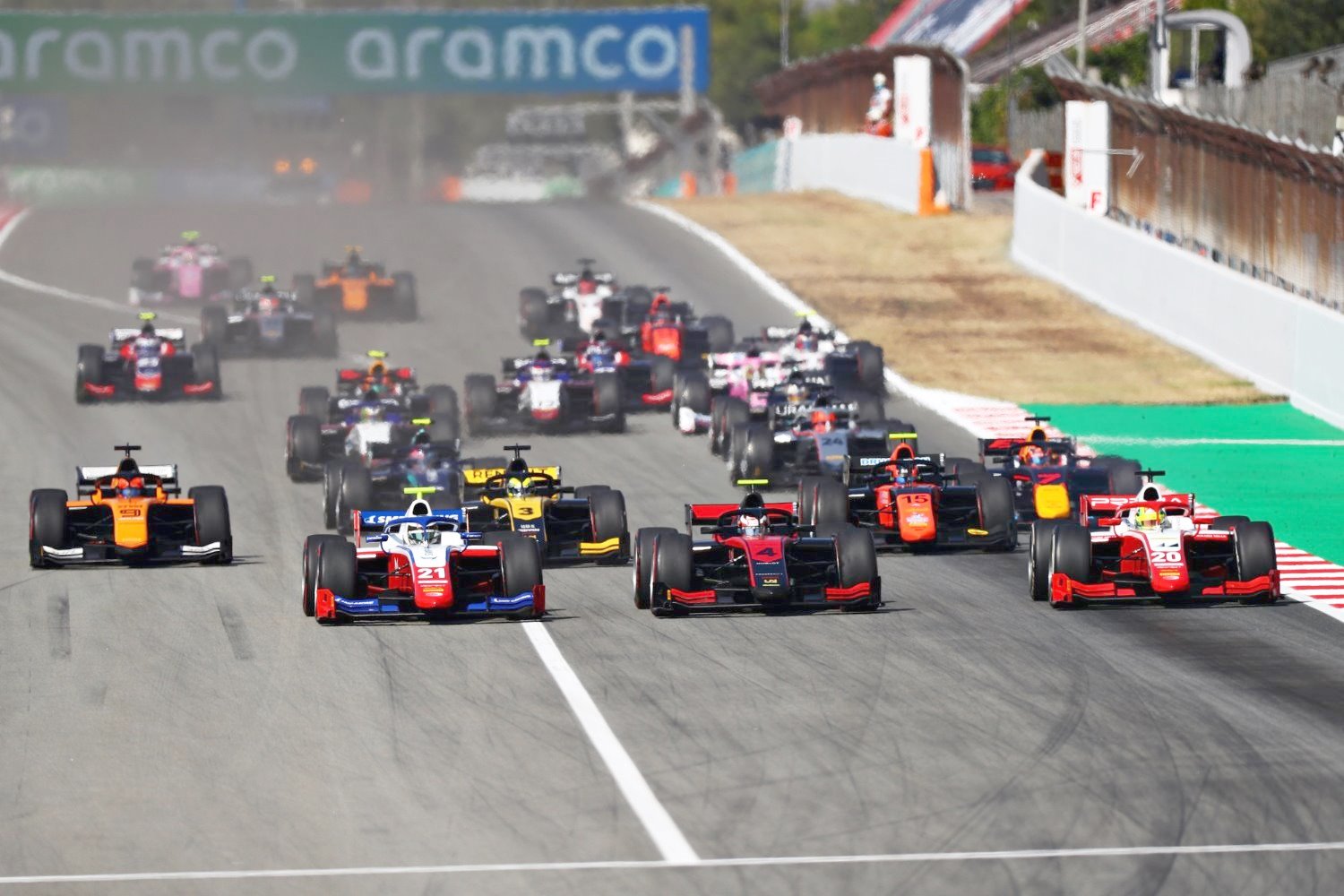 Nobuharu Matsushita won his first race of the season in incredible fashion, rising all the way from 18th to first, thanks in part to some clever strategic work from MP Motorsport. A well- timed pitstop handed him the opportunity, but his racecraft ensured the job was done as he finished ahead of Robert Shwartzman and Guanyu Zhou.

For most of the afternoon, pole-sitter Callum Ilott had looked certain to seal a third victory of the year, but the UNI-Virtuosi driver ended up in fifth after a chaotic climax.

A late safety car period forced a number of the grid to pit for a second time, including Ilott. This shuffled the pack and allowed the podium finishers the opportunity to get ahead of him, which they gleefully took.

Championship contender Christian Lundgaard’s weekend didn’t get any better after a disappointing Qualifying yesterday, as he finished in 11th place and out of the points.

Shwartzman secured his first front row start in an F2 Feature Race on Friday and made his getaway count, sending it furiously off the line to fire ahead of pole-sitter Ilott. The UNI-Virtuosi driver was too busy fending off Mick Schumacher around the first corner.

The PREMA man – the highest placed driver starting on the hard Pirellis – had thundered down the left from fifth place and was attempting to nab second from the Championship leader. The duo nearly kissed tires the exit, as Ilott just about clung on.

Shwartzman was given an early breather at the front as fellow F3 graduate Marcus Armstrong skidded into the gravel trap and came to an abrupt halt to bring out the safety car.

The field got back underway cleanly as Ilott fought out of DRS range from Schumacher and got back to battling Shwartzman. It took him a couple of laps, but Ilott was closing in on his title rival and eventually launched past the Russian down the main straight and into the first corner to reclaim the lead.

Yuki Tsunoda nipped ahead of Jack Aitken and into seventh before leading the Campos driver into the pits to ditch the soft tyres on Lap 7. Having lost the lead, Shwartzman followed a lap later, while Ilott remained out until Lap 9, clearly comfortable with his management of the Pirellis.

Schumacher had been handed first when those on the primary strategy pitted, but his attempts to build a gap at the front before his stop were hampered as he slipped a little due to a lack of grip, and ran wide. He kept it together, thanks to some razor-sharp reactions.

Degradation was always likely to play a defining role in Barcelona, and with track temperature hitting 47 degrees, that was certainly proving to be the case. PREMA’s decision to run Schumacher on the alternate strategy was causing the German some problems. His Pirellis were heavily degraded, with Ilott just 4s behind, and he was forced to dive into the pits on Lap 23, with more than 10 to go.

Schumacher returned way back in 13th, with Ilott returning to P1. The German was then handed the opportunity to rest his soft tyres as Sean Gelael and Giuliano Alesi touched tyres, spinning the HWA RACELAB machine and bringing him to a halt to spark another safety car period.

UNI-Virtuosi rolled the dice and pitted Ilott for a second time for a fresh set of soft tyres. Felipe Drugovich, Shwartzman and Zhou all joined him in pitting again. Ilott returned in P2, behind Tsunoda, who opted not to change.

Tsunoda clung on when racing resumed, but Ilott did not. Coming almost out of nowhere, Matsushita benefited from the SC period, pitting just before the collision and returning in third. Having done everything right until this point, Ilott surrendered second to Matsushita at Turn 4, and then lost a further place to Shwartzman.

Tsunoda could only hold on for so long though, as both Matsushita and Shwartzman forced their way through just before a third safety car period, after Roy Nissany lost control and dumped his car into the wall at Turn 3.

Racing resumed with just one lap to run, and Matsushita calmly held on to first place ahead of Shwartzman. Zhou managed to dash ahead of Tsunoda for the final podium place, with Ilott dropping to fifth. Schumacher managed sixth, followed by Drugovich, Luca Ghiotto, Dan Ticktum and Louis Deletraz.

Ilott retains his grip on the Drivers’ Championship with 120 points, but Shwartzman has leapt to second and closed the gap to 17 points. Lundgaard falls to third with 87 points, ahead of Zhou and Tsunoda.

In the Teams’ Championship, UNI-Virtuosi lead with 196 points ahead of PREMA Racing on 172. ART Grand Prix are third, ahead of Hitech Grand Prix and Carlin.

“I am really happy. I have been struggling for pace this season at times, but we had mega pace today. The Safety Car was perfect timing, but I will get confidence from this race. Starting from P8 tomorrow, I think I can have another good race and will keep   pushing.”