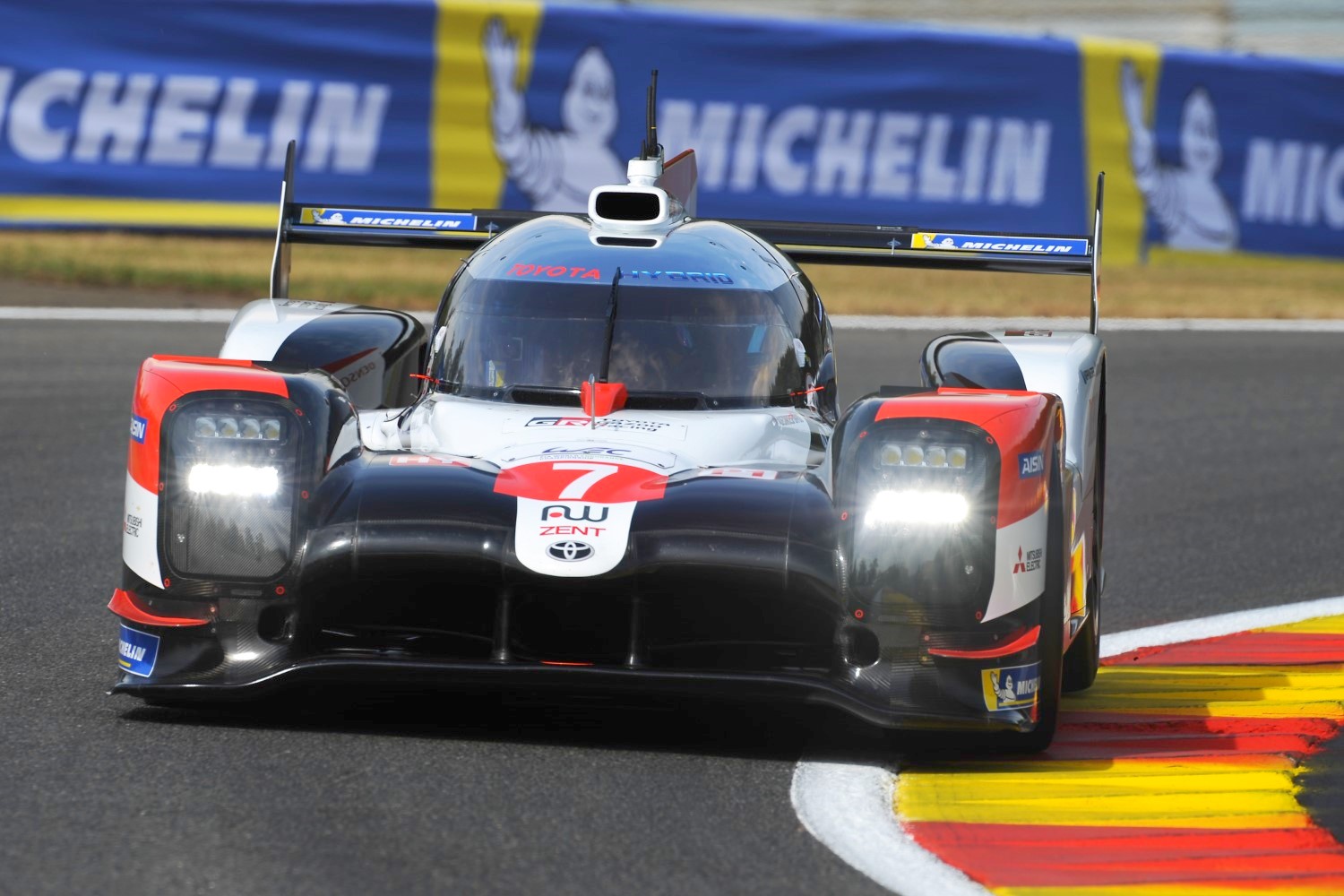 TOYOTA GAZOO Racing returned to winning ways in the 2019-2020 FIA World Endurance Championship (WEC) with a one-two victory in a dramatic and rain-affected Total 6 Hours of Spa-Francorchamps, the sixth round of the season.

They were pushed hard by Sebastien Buemi, Kazuki Nakajima and Brendon Hartley, in the #8 TS050 HYBRID, who finished 34.170secs behind as the team earned its fourth one-two of the season, stretching its lead in the teams’ World Championship to 42 points over Rebellion, whose #1 car finished a lap behind in third.

After days of sunshine and high temperatures, the famously variable Spa weather struck just over an hour before the start, with a heavy rainstorm causing the race to begin behind the safety car.

When racing resumed on lap five, both TS050 HYBRIDs used their four-wheel-drive capabilities, instantly overwhelming the pole position Rebellion #1, with Sebastien in the #8 leading from Mike in the #7.

Conditions were constantly evolving and at the first pit stops, close to the one-hour mark, the #8 crew pitted a lap earlier and kept the Michelin wet tires, whereas Mike in the #7 opted for dry tires. When the safety car was called soon after due to an incident for a GT car, it became clear that conditions favored the dry rubber.

Sebastien relinquished the lead to change tires and the green flags waved with the #7 leading a TOYOTA GAZOO Racing one-two. More rain was to come, however, as the second hour came to a close and both cars pitted simultaneously for wets; the #7, with Kamui at the wheel, led Brendon in the #8 by a minute, with the #4 Bykolles a further minute behind in third

When the rain worsened, another safety car was called which eliminated the #7 TS050 HYBRID’s advantage. Fortune soon returned the favor when Brendon lost around half a minute leaving the pits due to an issue which had affected both cars intermittently during the race. That restored the #7 car’s advantage

As the final third approached the sun made a rare appearance, allowing Jose and Kazuki to take their stints on dry tires. The race entered its final hour under the safety car, bringing Kazuki on to the tail of Jose and setting up a tense duel heading into the final pit stop.

Jose held the lead under heavy pressure and both pit crews serviced the cars in near identical times, with the #7 pitting a lap after its sister car. Mike took the wheel and saw out the remaining 40 minutes, with Sebastien holding station in second until a brief late stop for fuel, crossing the line 34.170secs behind at the flag.

It proved a thrilling battle in the LMP2 category as Giedo Van Der Garde put in a superb opening stint in the No. 29 Racing Team Nederland entry, which saw the Dutch team take an early lead.  It was not to last, however, as United Autosports fought back in the changeable weather conditions and faster pit stops to take the lead going into the race’s final two hours.

Second place went to the No. 42 Cool Racing ORECA 07 Gibson fronted by Nicolas Lapierre, Antonin Borga and Alexandre Coigny.  The Swiss team got off to a difficult start pitting early to mark a driver change but the trio made a mighty comeback eventually crossing the line ahead of Racing Team Nederland who finished third.

The No. 36 Signatech Alpine Elf entry looked on course for a top three position but there was drama in the race’s closing hour when Thomas Laurent crashed heavily at Blanchimont after making contact with another car. Fortunately, 22-year-old Laurent walked away from the car but was taken to the medical center for further checks.  The incident brought a 36-race points-scoring streak to an end for the French team.

It was a relatively trouble-free race for the No. 38 JOTA Sport Entry and No. 33 High Class Racing entries who finished fourth and fifth respectively with the help of Goodyear tires. Antonio Felix Da Costa took advantage of Mark Pattersons’s small spin in the race’s closing stages to move ahead of   the Danish team in the race’s closing stages. Italian team Cetilar Racing ended the race sixth overall.

The No. 37 Jackie Chan DC Racing entry eventually finished seventh, the car spending a lengthy stint in the pits due to rear brake failure.  Meanwhile, Eurasia Motorsport ended the race eighth in class – the team suffering from gearbox issues during the race.

The LMGTE Pro category provided non-stop action between all three manufacturers represented in today’s TOTAL 6 Hours of Spa-Francorchamps, and at the checkered flag it was the No.92 Porsche 911 RSR of Michael Christensen and Kevin Estre which claimed the laurels for the first time this season.

It was a first win for reigning champions Estre and Christensen since Fuji 2018, and a first Porsche victory from pole in GTE Pro since Team Felbermayr Proton at Fuji way back in 2012!

With several rainstorms and four Safety Car periods – the first 17 minutes of the race were run behind the Safety Car due to very heavy rain – bringing about different strategies, the Porsche came home ahead of the No.95 and No.97 Aston Martin Racing entries.
The Dane Train of Nicki Thiim and Marco Sorensen in the No.97 crossed the line just 5.6s behind the winner, with the sister No.97 – which featured the only Belgian driver in the race, Maxime Martin, together with Briton Alex Lynn – taking the final podium spot.

Aston Martin Racing’s Team Principal confirmed during the race that a wrong wet weather tire choice had hampered them in the first hour of heavy rain.  Once resolved, the two Aston Martin Vantage AMRs performance was much improved and both cars were in contention for top spots.

All three manufacturers led the race at different stages and provided continual entertainment.  Despite being at a power disadvantage following the latest BoP, the No.51 AF Corse Ferrari 588 GTE EVO was at the head of the field for much of the race thanks in large part of a marathon 4h 13 minute stint from Alessandro Pier Guidi, the Italian displaying some great driving skills in difficult conditions.

Many competitors were in fuel-saving mode in the final stages, trying to avoid having to make a final splash and dash, with the final SC period in the fifth hour undoubtedly helping some more than others.

LMGTE Am also provided plenty of action and lead changes but the supremely consistent No.83 AF Corse of François Perrodo, Emmanuel Collard and Nicklas Nielsen claimed victory after a hard six hours of action.

It was a second victory this season for the trio, and the No.83 became the first Ferrari to score multiple Am wins in a season since SMP Racing in 2015.  The result stretches their lead at the head of the points table to 110 points, 12 ahead of third place finishers No.90 TF Sport.

Coming home second, after a race which saw them feature strongly at the start and then again in the final two hours, was the No.77 Dempsey Proton Racing Porsche 911 RSR of Christian Ried, Riccardo Pera and Matt Campbell.  The Australian was on a charge at the end and crossed the line just 2.8s behind the winner to give the team its best result of the season so far.

As said, the No.90 TF Sport Aston Martin of Salih Yoluc, Charlie Eastwood and Jonny Adam claimed the final podium spot and the result consolidated their position in the points standings with double points yet to come for the 24 Hours of Le Mans and 1.5 points for the final round of the season in Bahrain.