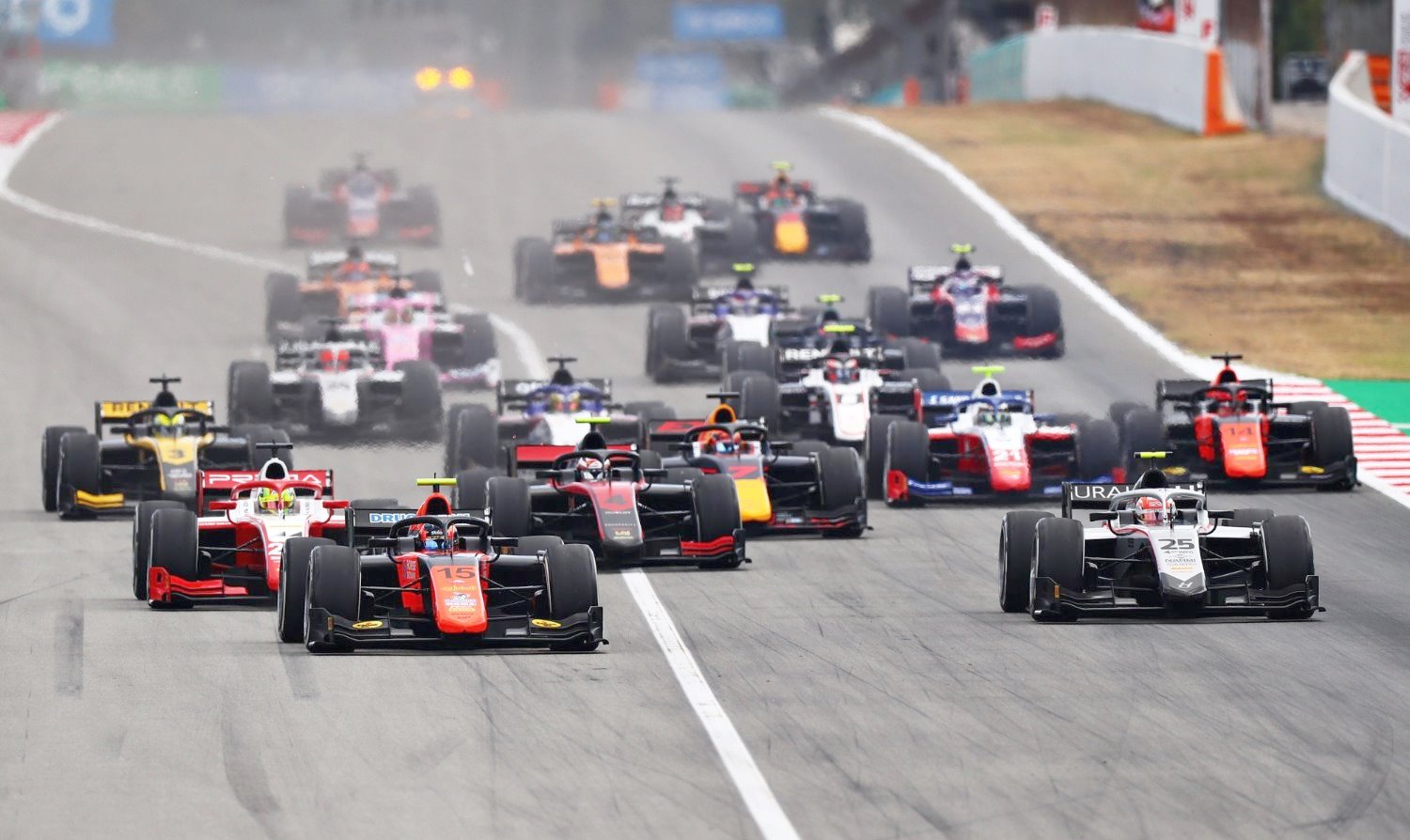 In a race where most of the grid struggled to manage their Pirelli tires, Drugovich bombed ahead of pole-sitter Ghiotto off the line and kept it calm and controlled out in front, showing no sign of  any detrimental wear.

Schumacher had a mixed start to the race, which had initially seen him challenge for the lead before falling to P4. The German forced his way ahead of Callum Ilott for his fourth podium of the season.

Despite heavy degradation, Championship leader Ilott was able to cling on to eighth and the final points position. Robert Shwartzman wasn’t so lucky, finishing out of the points in 13th.

Sean Gelael was unable to take part in the race following an incident on the last lap on Saturday, which led to a back injury. The Indonesian is expected to make a full recovery.

Ghiotto was sluggish off the line, Drugovich wasn’t. The Brazilian flung down the right and into the lead ahead of the first corner. Schumacher initially enjoyed a solid getaway himself from third, and attempted to fire down the middle for first but couldn’t find a way through, ending up losing a place to Ilott. Drugovich was in a league of his own out in front, building up an impressive early advantage of 3s inside of the opening four laps. Having gotten comfortable, the MP Motorsport driver eased off on the throttle to preserve his rubber.

Louis Delétraz had been stalking the rear wing of Shwartzman in a fight for eighth, but their brawl was brought to an abrupt halt thanks to a mammoth overtake from Nikita Mazepin. The Russian swung to the right and hurtled down the side of him on the main straight and into the first corner. The Charouz Racing System driver was clearly struggling with degradation, which allowed Christian Lundgaard to follow Mazepin through four laps later.

If Shwartzman thought this had given him some breathing space, he was wrong. Mazepin managed what Delétraz could not, braving a late brake at the first turn and edging ahead of the Russian.

Drugovich had extended the gap to eight seconds, as Ilott reeled in Ghiotto. The door was open and Ilott dove down the inside on the main straight to spark a wheel-to-wheel brawl with the Italian. Ghiotto managed to close the door and narrowly retained the lead, with Schumacher following the pair, ready to pounce on any mistakes.

In the end, the PREMA racer wouldn’t need one. Ghiotto got a move on and escaped the clutches

of Ilott, which robbed the UNI-Virtuosi racer of DRS and allowed Schumacher to ease past at the first corner.

Yuki Tsunoda had snuck up on Guanyu Zhou and nabbed fifth from the UNI-Virtuosi driver in a move that appeared all too easy down the main straight. He followed this up with an overtake of Ilott for fourth, who was struggling with degradation.

Ilott wasn’t the only one, as his teammate Zhou was forced into the pits for fresh Pirellis, which cost the Renault junior a points finish. Jack Aitken and Dan Ticktum also had to go in for a change of boots.

Drugovich coolly took the checkered flag for MP Motorsport’s second win of the weekend – the first time any team has won twice on the same weekend in 2020. Ghiotto kept hold of second ahead of Schumacher and Tsunoda.

Matsushita stole fifth, ahead of Mazepin in sixth. Pedro Piquet made a late charge to seventh for his first points in F2. Ilott dropped back to ninth on the final lap, although a late time penalty for Lundgaard promoted him to eighth.

Ilott extends his lead over Robert Shwartzman in the Drivers’ Championship by one point to 121, ahead of the Russian on 103. Lundgaard remains third on 87, followed by Tsunoda and Schumacher. In the Teams’ Championship, UNI-Virtuosi remain first with 197 points, ahead of PREMA on 182. ART Grand Prix are third with 121, followed by Hitech and MP Motorsport.

“Amazing race for me. I started P2 and got the jump past Luca into Turn 1. After that, the car was just amazing, basically the same as yesterday. It is a shame we couldn’t capitalize on that yesterday, because of the Safety Car, otherwise, we were pretty much in the same spot or second.

“Shame about that, but this pretty much makes up for yesterday, and I am really happy, and really happy for the team, because for sure, we have made a big step forward this weekend.”