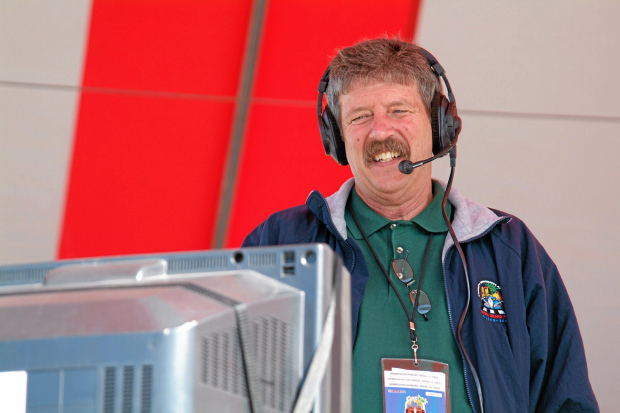 Bruce Flanders, the legendary motorsports’ announcer, who was the ‘voice’ of the Grand Prix of Long Beach, died peacefully at his home in San Bernardino on Friday, August 14, 2020 at the age of 74.

Flanders announced all forms of motorsports including AMA motocross, NASCAR, IMSA, NHRA, CART, IRL and many others. He suffered from chronic obstructive pulmonary disease for years, and once said, “They call my disease progressive, but that’s just another word for terminal. I know how this will end eventually. I just take deep breaths and keep on going as long as I can.”

Bruce came for a motorcycle family. His father Earl not only owned the Flanders company, which was the importer for BMW in the USA, but Earl also raced and organized the Bonneville Salt Flat speed trials. Bruce followed in his father’s footsteps and became a good speedway racer on the SoCal circuit, until he got bit by the announcing bug and quit racing in 974 to become the announcer at Lions Drag Strip. Bruce would announce at any event where bikes and cars went fast and often worked four days a week at the races. He had a unique sound and anyone who ever heard Bruce’s voice over a public address system will remember it for as long they live.