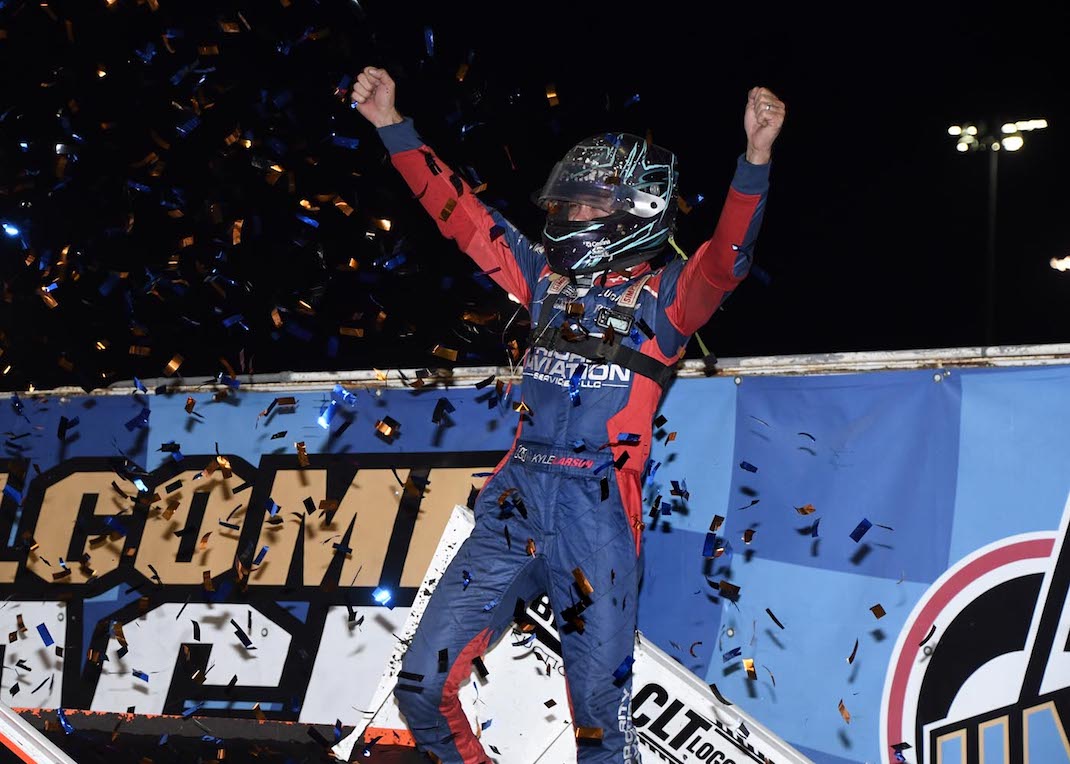 Kyle Larson was forced to leave Knoxville Raceway with a broken heart last year after failing to qualify for the Knoxville Nationals. A year later, it was healed with the Elk Grove, CA driver winning the biggest Sprint Car race of his career at the historic half-mile with the World of Outlaws NOS Energy Drink Sprint Car Series.

Larson was a missile among bullets Saturday night, leading from the green to checkers in the 30-lap Feature to claim the Brownells Capitani Classic presented by Great Southern Bank win and the big $50,000 check.

“It means a lot,” Larson said about winning the Capitani. “We wish it was the (Knoxville) Nationals but hats off to the Outlaws and Knoxville and everyone who helps present this race and award this purse.”

He and the Silva Motorsports team have been the class of the field about every time they hit the black Zook clay. Aside from a 10th-place run with the Series in May, Larson has won five out of his last six starts at the track in the #57 car, owned and worked on by Paul Silva. On Thursday, Larson won the opening night of “The One and Only” – which replaced the postponed Nationals – and was forced to settle with a second-place finish Friday night.

His performance during the two opening nights of the event helped lock him into the DIRTVision Fast Pass Dash for Saturday’s Capitani Classic. With the fortune of starting on the outside pole for the Dash, Larson darted past polesitter Aaron Reutzel on the start and ran away with the win.

It was teaser of what would come in the 30-lap Feature.

Reutzel tried to make it interesting when the green flag flew, crowding Larson on the entrance to Turn 1. However, Larson was strong no matter where he had to put his car. While ridding the inside berm, Larson was able to nose ahead of Reutzel off Turn 2 and pulled further ahead down the backstretch. He cleared Reutzel on the entrance to Turn 3 and again pulled away.

A lap later, Larson no longer had to worry about a battle from the Folkens Bros Trucking #87 as Reutzel suffered a rear end issue that took him out of the race. That lined up points leader Logan Schuchart alongside Larson for the restart.

When the green flag waved again, Larson had no intentions of allowing another challenge for the lead. He timed his throttle acceleration perfect and rocketed ahead of the field. He became untouchable, pulling away to about a four second lead. Even while having to navigate traffic.

His race almost came to an end toward the halfway point when he nearly collided with Shane Golobic while trying to lap him. The incident forced him up the inside berm and got his car out of shape. He lost little time to Schuchart, though, who had been working on keeping 2019 Knoxville Nationals winner David Gravel behind him.

Gravel’s car came to life in the closing laps, passing Schuchart for second with five laps to go. His next target, Larson, was too far gone to catch. Time wasn’t on his side. Until it was given to him.

James McFadden rolled over in Turn 4 with two laps to go, bringing out the red flag and giving Gravel one attempt at dethroning Larson. It was a rematch from Friday night’s race, where Gravel held of Larson in the closing laps of the race. Knowing Gravel was behind him made Larson a little worried, too.

“I wasn’t quite sure what to do because Gravel gets around the bottom so well,” Larson said. “I had been running the top both ends really good. But I didn’t want to leave the door open on the restart. I kind of debated with myself the whole way down the front stretch of what to do.”

When they were allowed to mash their throttles again, Larson made the decision to dive to the bottom and block the head of steam Gravel had going into the turn. His decision helped win him the race, as Gravel was unable to work the bottom to his advance and get by Larson.

“If he ran the top there, I was going to send it in on him,” Gravel said. “It just didn’t happen. It was a good race. We wouldn’t have had a shot if that red didn’t come out. He was gone. Started fifth and couldn’t get going there early in the race. Had to battle Logan (Schuchart) there quite a bit. I think we had the second-best car.”

With his performance this weekend of finishing, fifth, first and second, Gravel has helped propel Jason Johnson Racing to second in the team points – now only four-points back from the leader.

Logan Schuchart had a similar feat by reclaiming the points lead the first night of “The One and Only” when reigning Series champion Brad Sweet and 10-time Series champion Donny Schatz DNF’d. He held the lead throughout the weekend and with a third-place finish during the Capitani Classic, he leaves Knoxville with an 18-point lead over Sweet.

“I just got beat by better experienced drivers and better teams tonight,” Schuchart said. “We’ve gotten better since we’ve come to Knoxville. Really hit it right last year. I just pulled my wing back a little too much at the start of the race and got tight on the cushion and started trying different things that wasn’t really working.”

Along with Larson’s impressive run, Schatz had one of his own. He lost a motor during his Drydene Qualifier race and his Tony Stewart/Curb-Agajanian Racing team had to scramble to get the car out of the track, to their trailer and then replace the motor in time to be back for the C-Main.

Schatz went from 17th to the win in the 12-lap C-Main, which transferred him to the rear of the Last Chance Showdown. He then went from 18th to fourth in the LCS to earn the final spot in the Feature. By the time the checkered flag was shown, Schatz had made his way from 24th to 12th in the Feature, earning the KSE Racing Hard Charger award for the second night in a row.

Larson’s win is his seventh win of the season with the Series – 15th career win overall – and the most historic one of his Sprint Car career, so far.

We’re only a year away from heartbreak or triumph at the 2021 Knoxville Nationals. By Nick Graziano