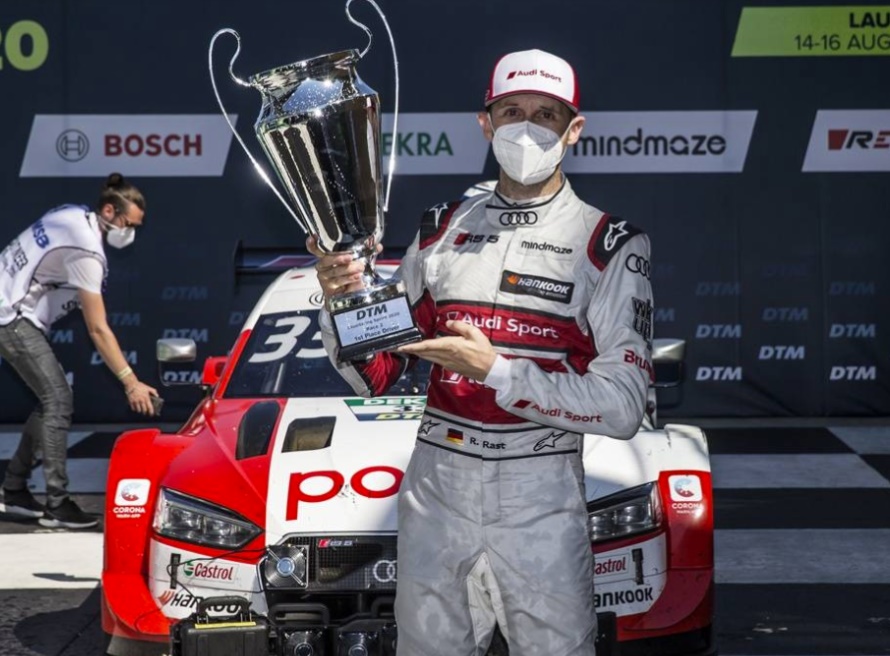 A heart-stopping finale in the DTM: in less than the blink of an eye and with the tiny margin of only 0.089 seconds, Audi driver Rene Rast put himself back in contention in the battle for the DTM title.

With this result, the German confirmed the upward trend for the brand from Munich and secured BMW’s 300th podium finish in the DTM’s long history. The second-best BMW driver was ex-Formula 1 driver Timo Glock, who was sixth across the finish line behind Mike Rockenfeller (Audi). After sixth place in the race on Saturday, Ferdinand Habsburg (AUT) again scored points by finishing tenth with his privately-run Audi.

Rast back into second place of the standings, but Müller well ahead at 100 points

One week from now, the DTM will be back in action at the Lausitzring again in the second part of its first-ever double header, but then at the 4.5 kilometers long Grand Prix track. Nico Müller having scored his third win on Saturday ahead of Sheldon van der Linde (BMW) and Robin Frijns (Audi), the Swiss holds a commanding lead in the drivers’ standings at 100 points after four races. René Rast, meanwhile, has made his way back up into second place with 61 points. Robin Frijns is third with 58 points. Marco Wittmann (28) is the best-placed BMW driver in sixth.

From lights to flag, the DTM staged a thrilling and entertaining race with spectacular maneuvers throughout the field. Robin Frijns, who started from pole position for the third time in four races, had to defend his position from René Rast in such a way that the German briefly had to drive through the grass.

While Nico Müller initially lost ground from second on the grid, Marco Wittmann was one of the drivers to make progress in the turbulent opening part of the race as he moved up from seventh to third. Frijns’s lead came to an end on lap three as Rast went past with a spirited move. After that, the German and the Dutchman swapped positions several times. The field of the up to 640hp strong touring cars was very closely together and the wheel-to-wheel battles for every position in the midfield were by no means less intense, quite some slight bodywork contact included.

Full-size in the rear-view mirror: Müller with a strong recovery

While Rast, Frijns and Wittmann made their mandatory pit stops to have a fresh set of tires mounted very early, Müller waited considerably longer to have better tires for the final sprint. Only seventh after his stop, the Swiss, who is to become a father for the first time within the next days, started his recovery that saw him move up all the way to second place.

The green-and-white Audi became bigger and bigger in the rear-view mirror of his fellow Audi driver Rast. And the German had miscalculated, expecting the checkered flag one lap of the 3.5 kilometers long sprint circuit earlier. With all his experience, Rast successfully defended his position from Müller until the final meters, the Swiss seemingly glued to the rear of Rast’s car, but eventually unable to mount a successful challenge.