The mayor of Coal Run, Kentucky, has announced that he will no longer be using Goodyear tires for police, fire, and emergency vehicles in his town over their anti-police policies.

Coal Run Mayor Andrew H. Scott said that his officers are outraged over the company’s anti-cop bias and that he will be switching to another tire company for all their police vehicles.

“Given that Goodyear actively markets their tires to federal, state, and local police departments across the nation, I find their newfound distaste for law enforcement to be insulting at best. Goodyear should certainly not continue to count on any sizable revenue from their very profitable police and military divisions in the future,” Scott said

Another government official who wishes to remain anonymous commented on the situation to TGP, saying “let Antifa keep them in business with the tires they buy for their bicycles. Most mayors I’ve talked to are done with Goodyear. They will take a BIG hit on this one.”

Goodyear’s stock price is down over 4 percent today following news that the company endorsed “Black Lives Matter” and banned employee support for police. The stock took a nose-dive after Trump called for a boycott.

The public apparently disagrees with this, or at least, the stockholders understand by now that once a company decides to go down the woke road they’ll soon find themselves driving right off a cliff. It happened to Dick’s Sporting Goods and Gillette the latter of which lost billions after its woke, anti-masculinity ad that attacked men for being men.

This is a good thing that the stock market now understands that there is no money in social justice, and soon, companies may decide that distancing themselves from this kind of lunacy is the best move.

08/19/2020 Goodyear Tires, which supplies tires to the NASCAR Series, has let their political bias into the workplace and it has thoroughly pissed off its employees and now customers, many of whom said they are never buying Goodyear Tires again.

A slide has leaked from a Goodyear diversity training which brands “Blue Lives Matter,” “All Lives Matter” and “MAGA” attire “unacceptable,” while deeming Black Lives Matter and LGBT slogans to be “acceptable.”  All lives don’t matter to Goodyear, only Black Peoples Lives Matter.  If you are Asian, White or anything but Black, your life does not matter.

The leaked slide is of their “zero tolerance” policy towards support for police or conservative values. 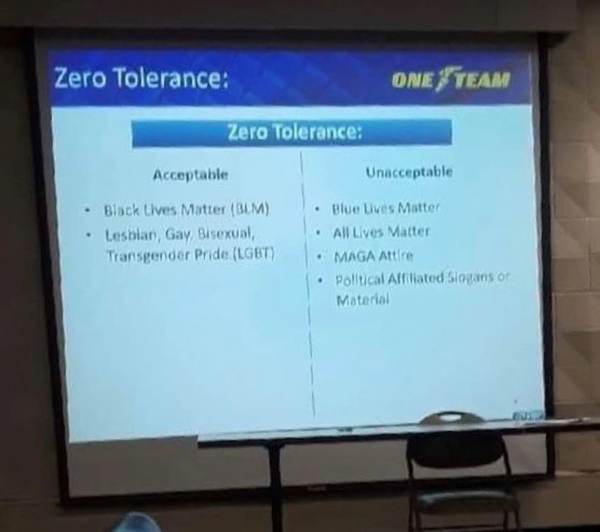 According to a report from WIBW, the person who took the photo of the slide said that it was presented at a Topeka plant by an area manager and says it came from their corporate office out of Akron, Ohio.

“If someone wants to wear a BLM shirt in here, then cool. I’m not going to get offended about it. But at the same time, if someone’s not going to be able to wear something that is politically based, even in the farthest stretch of the imagination, that’s discriminatory,” the employee told the station under the agreement of anonymity due to fears they could lose their job. “If we’re talking about equality, then it needs to be equality. If not, it’s discrimination.”

Goodyear did not respond to the station’s inquiries about whether the slide came from their main office, but said that they allow associates to support “racial injustice,” but not advocacy that falls “outside the scope of equality issues.”