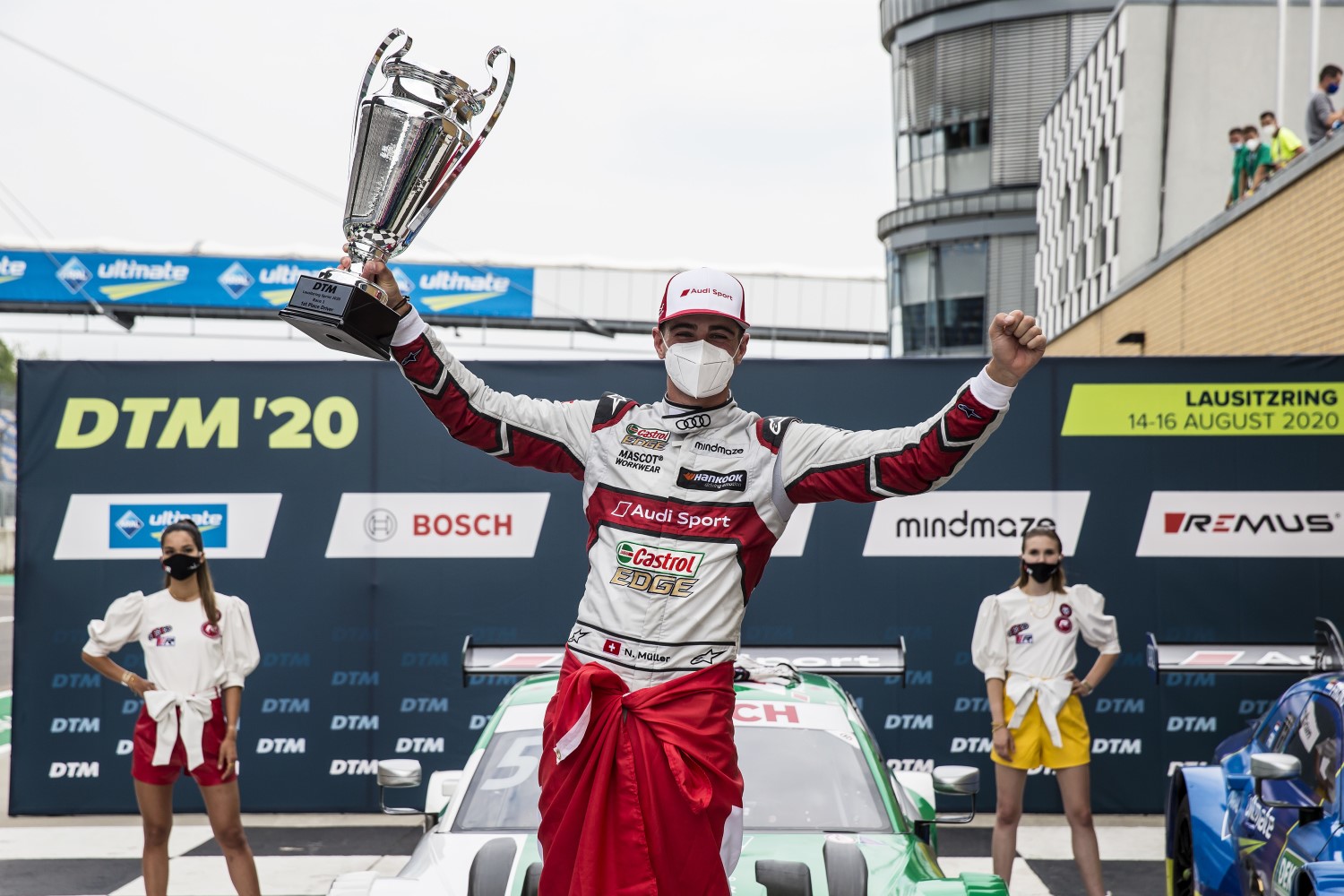 Nico Müller is the undisputed favorite: prior to the DTM’s third season round (21st-23rd August), the runner-up from last year’s DTM already has a considerable advantage in the points’ standings. However, not only his fellow Audi drivers René Rast (GER) and Robin Frijns (NED) are after the Swiss, BMW has made its comeback onto the podium and is attacking with Marco Wittmann (GER) and Sheldon van der Linde (RSA) at the forefront. In the process, 2020 DTM season is well underway after two rounds. The first double header in the DTM’s turbulent history since 1984, so two back-to-back race events within one week at the same venue, leaves no time to relax for the teams. Following last Sunday’s heart-stopping finale with the spectacular 0.089 seconds margin for victory, conditions for the fifth and sixth race of the season at Lausitzring could hardly be any better.

As usual, SAT.1 is broadcasting both races live in the German-speaking countries (Saturday and Sunday from 13.00 hrs). The streaming platform DTM Grid (grid.dtm.com) is offering comprehensive live and on demand coverage of the qualifying sessions, the races of the DTM Trophy and GTC Race as well as various onboard perspectives, directly into the fans’ homes or on their smartphones. The races at Lausitzring, located between Berlin and Dresden, will be held without spectators as originally planned. For the fourth season round at Assen in The Netherlands, 4th-6th September, the current status is that up to 10,000 spectators will be admitted on both the Saturday and the Sunday. One-day tickets are available at 49 Euros from the DTM Ticket Shop (tickets.dtm.com) and from the DTM Ticket Hotline (+49 1806 386 386).

Four races into the season, Nico Müller is clearly ahead. The Swiss already won the season-opening race at Spa-Francorchamps on the first weekend of August in a commanding way. In the second race, defending champion René Rast was the only one to beat him, but the officials handed him the victory after all as the German had secured himself an illicit advantage while leading the race. At Lausitzring, Müller went on to win the first race while Rast came out on top in the second race with the tiny advantage of 0.089 seconds. As a result, Nico Müller already has 100 points to his DTM tally.

Straight after the Lausitzring race, 28-year-old Müller headed back to Berne, where his partner is expecting the pair’s first child these days. However, anyone relying on the old racing drivers’ adage saying that every child is making you a tenths of a second slower could be proven wrong in Nico Müller’s case. Highly concentrated and motivated, the seven-time DTM race winner is focusing on winning the championship. In 2019, he missed out on the prestigious DTM title in the closing stages, but he is determined not to let this happen anymore in 2020.

His fiercest rivals, meanwhile, are coming from the ranks of his own Audi camp where he has to fear defending champion René Rast in particular. The latter may not have had the best start of the new season, but should never be underestimated as his victory on Sunday reflected. With 18 race wins – on a par with Italian Nicola Larini in sixth place of the all-time winners’ list – the 33-year-old German currently is the most successful driver in the field. Bernd Schneider (43 race wins) and Klaus Ludwig (37) are on top of the all-time winners’ list.

In the current points’ standings of the 2020 DTM, Rast is second with 61 points, but he is 39 points down on Müller as the clear leader. Third in the standings, Robin Frijns, also employed by Audi, has 58 points. So far, the Dutchman has secured three pole positions from four races, but has yet to convert them into his maiden DTM race win. With a second and a third place, however, he already has made it onto the podium twice. The 28-year-old from Maastricht is keen on his maiden DTM race win and if he doesn’t manage to pull it off on the second event at Lausitz, he would certainly like to do it during his home round at Assen on the first weekend of September.

Last year’s champion Audi can by no means rest on its laurels because BMW recovered quickly after the disappointment from Spa. On Saturday, South African Sheldon van der Linde, only 21 years old, drove a clever race to finish second with his BMW, temporarily putting Nico Müller under considerable pressure. On Sunday, two-time DTM champion Marco Wittmann brought success by finishing third. For the Munich-based brand, that was the 300th podium result in the DTM.

For the teams, the double-header events on this year’s calendar include a huge workload. With Assen and back-to-back events at the Nürburgring, there is even a triple-header in the month of September while another double-header follows in October with two consecutive rounds at Zolder. As a result, there are only few days available to disassemble the up to 640hp strong DTM cars into their substantial components and then to perfectly prepare them again with the greatest attention to detail. No time for cabin fever, and neither for the drivers, the majority of whom opted to stay in the Lausitz region. Next to their usual fitness schedule, they are meticulously working on the optimum vehicle set-up in detailed analyses together with their engineers. After all, one Lausitzring configuration isn’t identical with the next. After the sprint circuit, the Grand Prix lay-out is next, so 4.570km rather than 3.478km per lap. This means that 30 percent of the track is new, particularly as a result of the longer back straight and a longer infield section. The set-up used last weekend, therefore, doesn’t necessarily suit the Grand Prix track with its 13 corners. With 25 races held so far, Lausitz has been a regular fixture on the DTM calendar for years. The DTM only visited the classic circuits of Hockenheim, Nürburgring and Norisring more frequently.

“Wild bunch”: new generation of drivers scoring in the DTM and among the fans

Not just the drivers at the front of the field are providing excitement: the positions in the midfield are hard-fought, too, as Sunday’s entertaining race clearly demonstrated. In the process, the privateer teams also gave the Audi and BMW works drivers a good run for their money. Ferdinand Habsburg in particular caught the attention by claiming fourth place on the grid on Saturday and scored championship points in both races with the Audi run by Belgian team, WRT. His teammate Harrison Newey, the son of top Formula 1 designer Adrian Newey, scored his first-ever point in the DTM. Robert Kubica, meanwhile, having made the transition from Formula 1 to the DTM, is still having some troubles getting started. With this, he is in a similar situation as some other Formula 1 drivers before him. Therefore, it remains thrilling to see when the BMW driver from Poland can succeed in the DTM for the first time as well.

Next to the DTM, fascinating motorsport action can also be expected from the Gran Turismo Cup (GTC Race) and, in particular, from the DTM Trophy. The newly-founded feeder series from the DTM organization ITR will be present at Lausitzring with a field of 21 production-based GT sports cars. In the process, the debut of the new Toyota Supra will be attracting attention, with three-time touring car world champion José María López (ARG) as one of the drivers. The two British BMW drivers Ben Tuck and Ben Green shared the honors as the race winners at Spa, Tim Heinemann (Mercedes) is going into the weekend as the points’ leader.

Marcel Mohaupt, managing director, DTM organization ITR
“The DTM is now getting into an unusual, quick and relentless rhythm with many races within a short time frame. That is a challenge for the drivers and their teams and increases the pressure. I am hoping for just as much excitement as last Sunday. That, after all, was motorsport the way I, and certainly also the pleasantly many spectators like it, with a photo finish ad many position fights throughout the field. After that, we are all looking forward to Assen where fans will be admitted to the grandstands again at last.”

Robin Frijns, Audi Sport Team Abt Sportsline
“Personally, I prefer the longer track configuration at Lausitzring as it provides more opportunities for overtaking. Instead of turn 6 of the sprint circuit, we continue straight on and then head out onto the back straight after the chicane and the left-hand corner, so two additional chances to make up positions. Moreover, I can imagine that the tires will not degrade as much as at the sprint circuit, because they aren’t loaded as much on the straight. That is something that should suit me. Therefore, I hope that the weather will be playing along this weekend as well and that I can make it onto the podium again.”

Timo Glock, BMW Team RMG
“I am delighted that the action continues right away. Having two race events back-to-back doesn’t happen that often. We want to use the little time in between to implement further improvements for the weekend. The progress from Spa to the first Lausitzring weekend was positive, we have come considerably closer to Audi. However, we still have a lot of work to do. This weekend already, we are starting again from scratch.”

Robert Kubica, Orlen Team ART
“The week between the two Lausitzring rounds is a very brief one, but very important. The team is staying at the track and will be working on improvements with support from BMW. The longer track lay-out is to 70 percent identical to the one from last weekend, that is an advantage. We are all very focused to get further up, in qualifying in particular. Then, chances in the race are better, too. It is too bad that for these races, so close to the border to my home country Poland, fans still have too remain at home due to the covid-19 pandemic.”