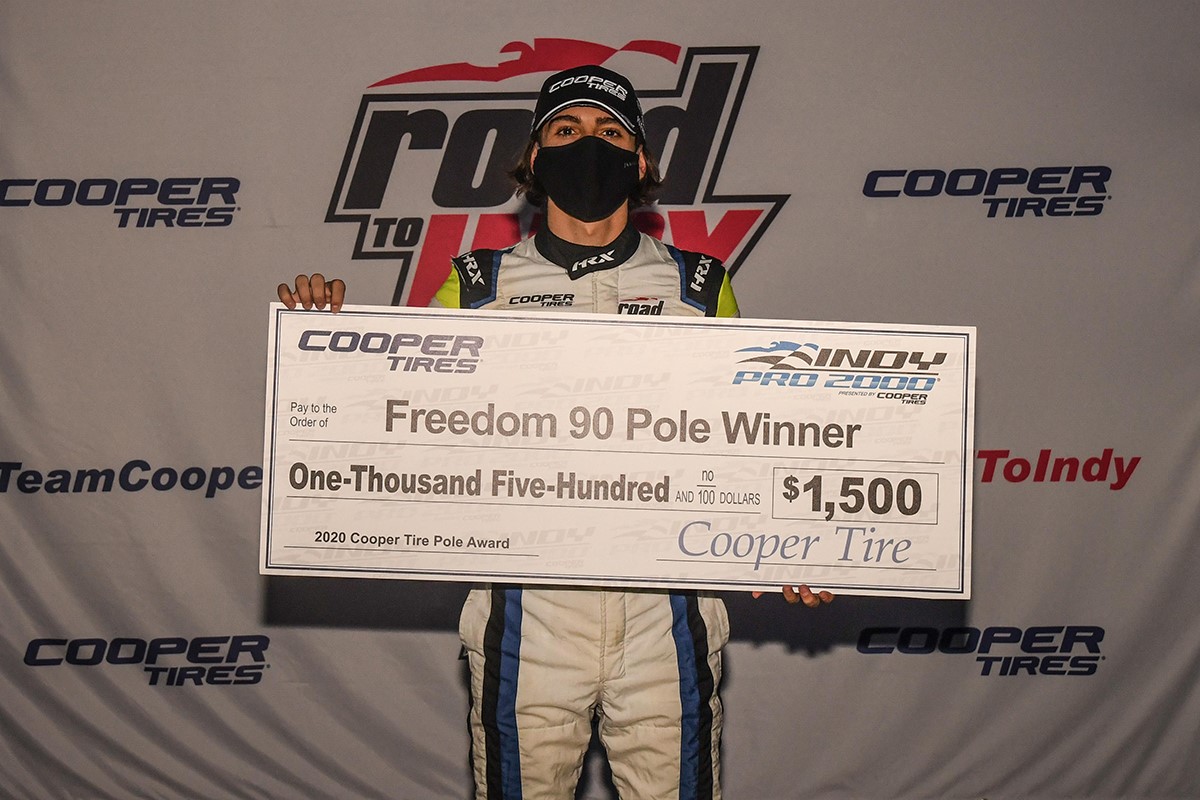 The two Road to Indy Presented by Cooper Tires races will share the billing with the Dave Steele Classic USAC Silver Crown Series.

Remarkably, the standout driver in the USAC Silver Crown series, five-time champion and current points leader Kody Swanson, 22, from Kingsburg, Calif., will not only turn double-duty tomorrow, he will start from the outside of the front row for the Indy Pro 2000 event following a sensational performance in qualifying for the Legacy Autosport team, which is also making its debut in Indy Pro 2000.

Sulaiman and Swanson Surprise
The opening five rounds of this year’s Indy Pro 2000 championship have already provided enough excitement to make up for much of the disappointment caused by the delayed start to the season due to the COVID-19 pandemic. Four different winners have emerged, and the intensity of the competition has ensured that the top five drivers are all blanketed by just 13 points heading into the first of the year’s two oval races.

However, none of those five will start on the front row of the grid for tomorrow’s Cooper Tires Freedom 90.

Instead, that honor will fall to a pair of rookies. Sulaiman, from Puebla, Mexico, this evening claimed his second Cooper Tires Pole Award for DEForce Racing after turning a two-lap average of 118.056 mph, which ended up being just good enough to edge out Swanson, who has a wealth of experience at Lucas Oil Raceway – but none at all in rear-engined open-wheel cars.

“We worked hard all day and we had a competitive car all day; we were always there in the times,” said Sulaiman, who also started from pole in one of the races at Road America last month. “We did some race runs to get everything right, and some quali runs, and the car felt amazing. The conditions changed a lot through the day, especially once it started getting dark, and the lap times got faster. We’re really happy and I’m very proud of the job the team did, especially for my first time on an oval in this car. I raced here in USF2000 last year so at least I know what to expect. This track is really small and to pass is difficult, so I’m glad to start up front. This is only my second oval but I think I’m starting to like it.”

With the qualifying order determined by championship points, Swanson had been first out onto the race track for the one-car-at-a-time qualifying session, with each driver set to complete two laps around the high-banked oval.

After gaining his very first experience of a rear-engined car during a recent test at Toledo (Ohio) Speedway, Swanson gradually worked his way up to speed during today’s three practice sessions, and really gained the attention of his rivals by ending up with the third fastest time at 21.2095 seconds.

He wasn’t done. Swanson took advantage of the cooler evening conditions to go faster again on each of his two qualifying laps, 20.9765 and then 20.9094, to set an impressive benchmark with an average speed of 117.920 mph. It was to remain good enough for an outside front row starting position.

“What an interesting day,” exclaimed Swanson. “Getting comfortable was tough – I’ve been to this racetrack a lot but never in a car like this so what is required of me as a driver is totally different. I struggled to trust the downforce and that high, arching entry that these Indy Pro 2000 cars run. We had good test sessions this morning, making good improvements in the third session, but we didn’t know what to expect from qualifying. It’s a lot of experience you’ve got to gain in two laps. But to start out from scratch and not know what to expect to being on the front row is really exciting.

“I’m ecstatic for the team and myself to be that high on the starting grid, but to be that close to the pole is a little disappointing, to not get it. I’m really thankful for the opportunity that everyone has given me. It’s a lot to get used to, including the tires – I’m used to bias ply tires and these Cooper Tires are radials so it’s something that requires experience and trust, and that’s what I was working on today. To be on the front row is really something, and I’m really thankful to the whole team.”

A single-car qualifying session saw the contenders venturing out onto the banked 0.686-mile oval in reverse order of their current championship positions. So, the pressure was on for Rasmussen. The standout contender this season had set the pace for the Jay Howard Driver Development team during the second of three practice sessions earlier in the day, but his time stood up as only third quickest overall behind Michael d’Orlando (Cape Motorsports), from Hartsdale, N.Y., and second-generation racer Eduardo Barrichello (Pabst Racing) from Brazil.

The first driver to lay down a marker was local driver Jack William Miller, from Carmel, Ind. Driving for Miller Vinatieri Motorsports, Miller was fifth out onto the race track. Impressively, his two-lap average of 108.088 mph remained out of reach of any of the next 10 drivers who completed their runs.

With only four more cars to go, 15-year-old Reece Gold, from Miami, Fla., backed up his form from last year, when he started a season-best third for his first-ever oval race, by jumping to the top of the charts with a two-lap average of 108.497 mph.

Neither Barrichello (Pabst Racing) nor Gold’s own Cape Motorsports teammate, d’Orlando, could match Gold’s time, so it all came down to Rasmussen.

He was up to the challenge. Rasmussen’s opening lap of 22.7084 seconds represented an average speed of 108.753 mph, and even though he was one of only three drivers not to improve on his second flying lap, the overall average of 108.708 mph was still good enough to clinch his fifth Cooper Tires Pole Award of the season.

“It was a good day,” said Rasmussen. “ We worked hard on the car all day, figuring out the setup, getting the car where it’s supposed to be. The guys did an amazing job again. This was my second time qualifying here so I knew what to expect. The track got a little bit better toward the end of the session, as the sun came down. I put two good laps together and got another pole, which was great. It’s harder to pass here than even some of the road courses. I started 15th last year and finished sixth to earn the Tilton Hard Charger Award, but I think starting first is a much better starting point! Hopefully we can capitalize tomorrow and get the most points possible.”
After enjoying a breakout weekend last month at the Mid-Ohio Sports Car Course, where he finished on the podium in all three races, Gold maintained that form this evening by completing the front row of the grid for tomorrow’s 75-lap race.

Miller, who also enjoyed a strong weekend at Mid-Ohio, finishing a career-best fifth in the final race, will share Row Two of the grid with d’Orlando, with top rookies Christian Brooks (Exclusive Autosport), from Santa Clarita, Calif., and Josh Green (Cape Motorsports), from Mount Kisco, N.Y., on the third row.

The field of 19 competitors will have one more opportunity to prepare for their only oval race of the season during a 20-minute practice at 3:55 pm EDT tomorrow afternoon, Friday, August 21. The green flag for the first race of the evening, the Cooper Tires Freedom 75, will fly at 6:45 p.m.

The practice sessions and both races for Indy Pro 2000 and USF2000 will be live streamed worldwide on the Road to Indy TV App, RoadToIndy.TV and the respective series websites, indypro2000.com and usf2000.com.