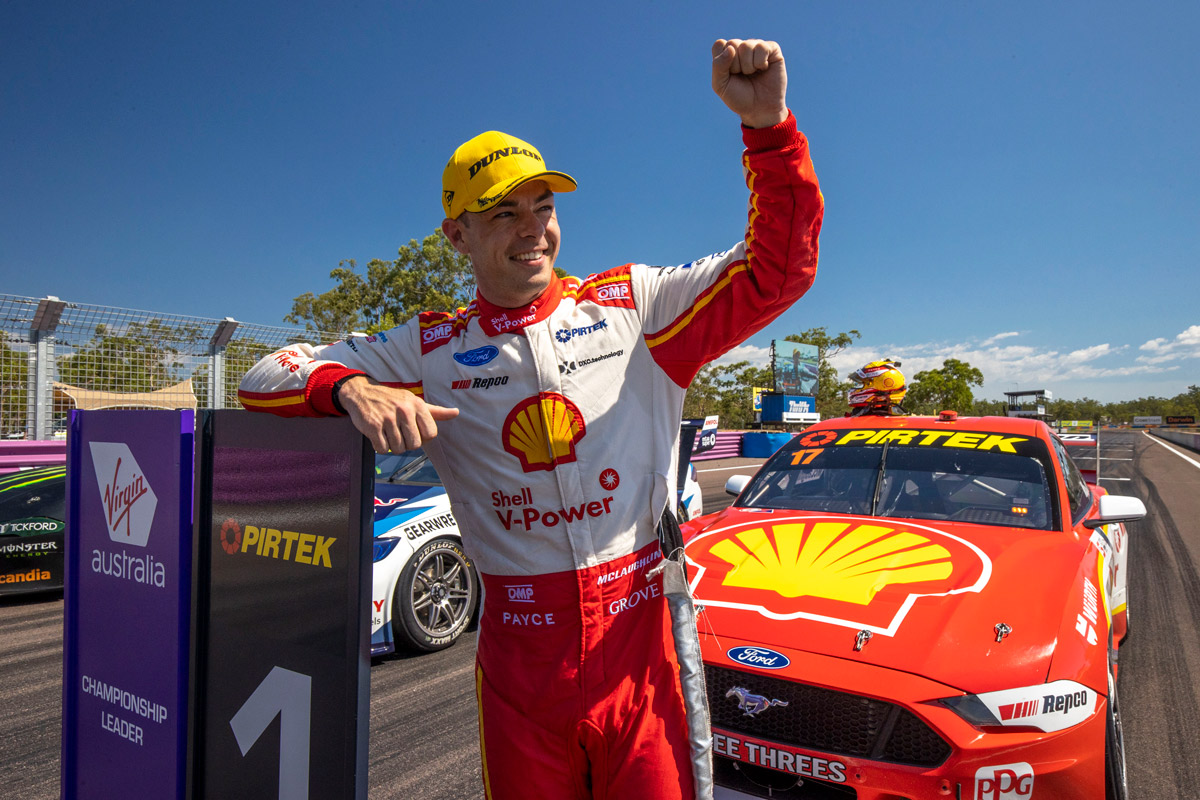 Scott McLaughlin put in a commanding performance to score victory in the opening race at the CoreStaff Darwin SuperSprint.

Having been pipped to ARMOR ALL Pole by Jamie Whincup, McLaughlin wasted no time restoring his place at the top, winning the drag race to Turn 1.

McLaughlin had the lead at just over a second when he pitted for two new rear tires on lap six and, when Whincup did the same a lap later, the order remained unchanged.

The win is the 49th of McLaughlin’s career, moving him ahead of Peter Brock to a clear fifth on the all-time winner’s list, which is topped by Whincup on 120.

“The start was really pivotal, to be able to get in front of Jamie there into [Turn] 1 and be able to do my own race from then on. It was very tight but got there in the end,” said McLaughlin.

“Jamie did that last week so the benefit of coming back here the week after was to try it as well, so I think it was a better strategy,” McLaughlin added.

“The pit stop was unbelievable, so I’m really proud of the boys, they’ve been working hard. It was a nice start to the weekend.”

Whincup’s only drama came at the start, briefly placed under investigation after his car moved just prior to the green light, before being cleared of any wrongdoing.

Said Whincup of the crucial start: “He just got a bit better drive on the clean outside line.

“There was a car width in it, I was just trying to have a little bit of overlap, so he couldn’t come across, but he just got in front enough, so he could control it into Turn 1.

“We didn’t quite have the pace today unfortunately, #17 was slightly quicker and deserved the win, so we’ll go and try and find where we were weak.”

Tickford duo Cameron Waters and James Courtney finished third and fourth, with the former having jumped his teammate by pitting one lap later, just prior to the two leaders.

The bulk of the race’s action came courtesy of those who ran longer first stints and then cut through their rivals on the run home.

Nick Percat ran ninth on lap one but drove his way up to fifth, finishing ahead of fellow late-stopper Anton De Pasquale.

Lee Holdsworth couldn’t match the pace of his Tickford teammates in seventh, two places down on his starting spot.

Eighth was Shane van Gisbergen who, starting 11th, complained of a lack of straight line speed, but took four new tires on lap 23 and made ground in the dying stages.

Chaz Mostert and Fabian Coulthard completed the top 10, ahead of Mark Winterbottom, David Reynolds – who moved up from 16th in qualifying – and Scott Pye.

Eighth-placed qualifier Pye had to work hard for his result, having stalled at the start and dropped not only to last, but a significant way behind the field.

Jack Le Brocq had an even worse opening lap, breaking his Mustang’s left-front upright in a squeeze between Andre Heimgartner and Reynolds at the exit of Turn 1.

It was a disappointing race for Darwin driver Bryce Fullwood, who had an off-track excursion at Turn 5 and fell from 10th on the grid to an eventual 19th.

Another two ARMOR ALL Qualifying session and two 38-lap races will complete the CoreStaff Darwin SuperSprint on Sunday.