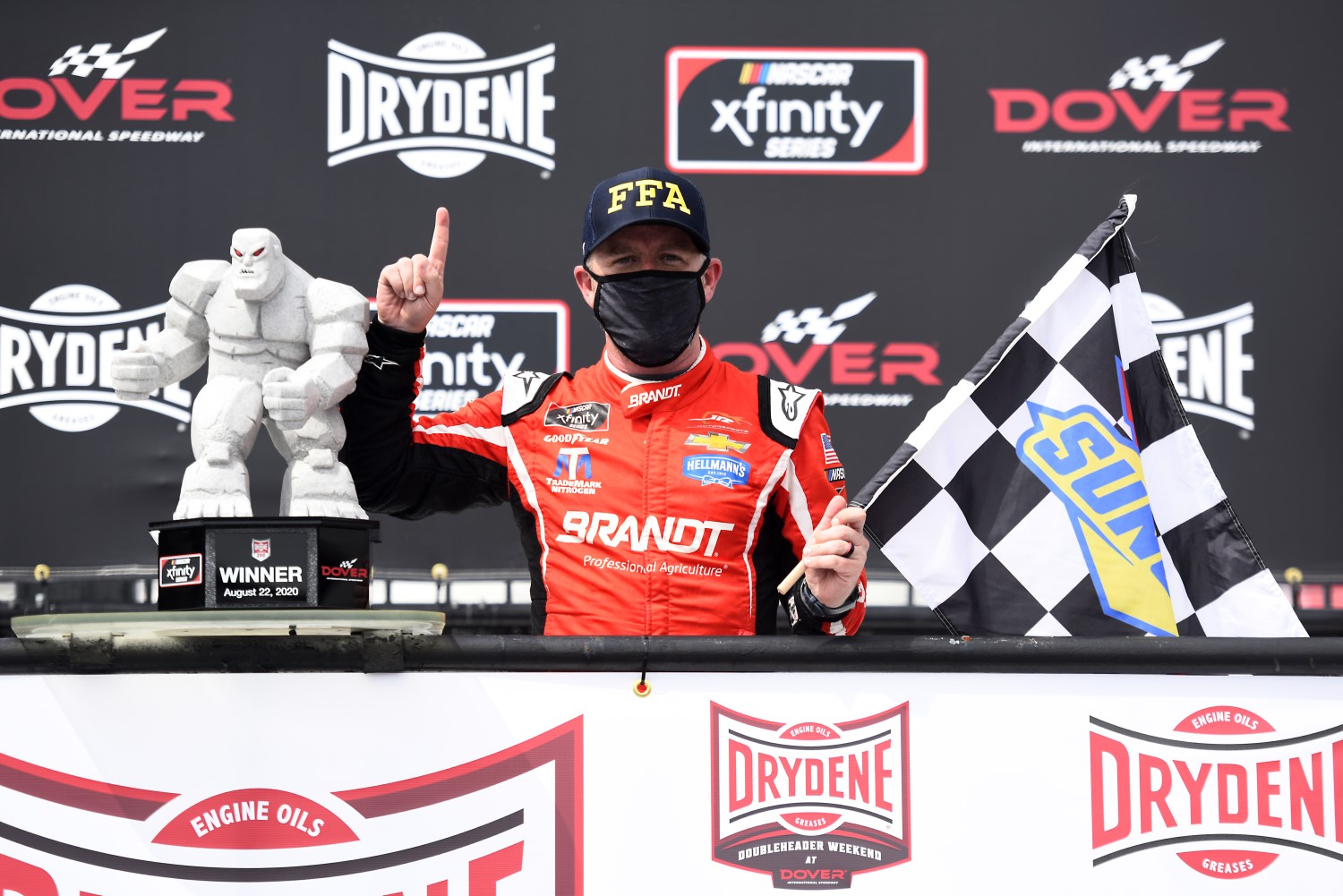 A week earlier at the Daytona Road Course, Allmendinger wheel-hopped into Allgaier’s No. 7 JR Motorsports Chevrolet and knocked him out of a top-five finish. Allgaier expressed his displeasure after the race and ignited a firestorm on social media from those who thought Allmendinger’s miscue was purely accidental.

The criticism lit a bonfire of determination in Allgaier, who turned a star-crossed season around with his first NASCAR Xfinity Series victory of the year, his second at Dover and the 12th of his career.

“This is the power of social media,” Allgaier declared after climbing from his car on the frontstretch. “I got blasted all week last week. So I guess I can thank AJ for giving me the drive and determination and all the haters on social media, ’cause that’s definitely what’s given me some fire, and we’re firing at the right time.”

Allgaier led 120 of the 200 laps at the high-banked concrete Monster Mile and finished 1.977 seconds ahead of runner-up Austin Cindric, who had won five of the previous six Xfinity Series races and finished second in the other.

Allgaier’s pit crew (Alex Bowman’s No. 88 NASCAR Cup Series crew) got the No. 7 Chevrolet off pit road ahead of Cindric on the final two pit stops under caution, and given the importance of track position at Dover, that proved decisive. Given Allgaier’s ill fortune throughout the season — the incident with Allmendinger was just the most recent in a litany of misfortune — Saturday’s triumph was a welcome relief.

The Drydene 200 was the first leg of a weekend Xfinity Series doubleheader. The NASCAR Cup Series also will race Saturday and Sunday at Dover.

“These last 18 to 24 months have been crazy,” Allgaier said. “I’m just proud of these guys and the no-give-up attitude they’ve got. This team is incredible. What a day. What a race car. We were off a little in the beginning, and (crew chief) Jason (Burdett) did a great job of getting us where we needed to be at.

“The slicker this place got and the more rubbered-in it got, the better we were. So the Cup race today, I’m going to be watching that intently and see what happens. Then, obviously, tomorrow we come back, and we’ve got to see what adjustments we can make. I still think we can be better.”

From the seat of his No. 22 Team Penske Ford, Cindric could see how hungry for a victory Allgaier was.

“I had a great battle with Justin,” Cindric said. “Obviously, he wanted it really bad, and it wasn’t going to be an easy pass. Hopefully, we can take it to him tomorrow.

“He drove the wheels off that thing. I don’t know if you guys were watching my on-board camera much, but he was sideways from the beginning of the run to the end of the run. It was pretty amazing, so props to him and those guys, and we’ll try to do better tomorrow.

“Track position was extremely important.  The track didn’t quite move around.  When we’d get a restart about 10-15 laps in you could be good being the first guy up or making hay in traffic, but we have some things we can execute better on, but it was a great points day and getting our PPG Mustang in the top three is great and hopefully it’s something to build on for tomorrow.”

While running fourth and trying to pass Cindric from the bottom lane, Briscoe spun into the inside wall on Lap 77, damaging the front suspension of his No. 98 Stewart-Haas Racing Ford. Though Briscoe recovered to run 10th and hold second place in the series standings, he dropped 72 points behind Cindric in the race for the regular-season championship and the accompanying bonus of 15 Playoff points.