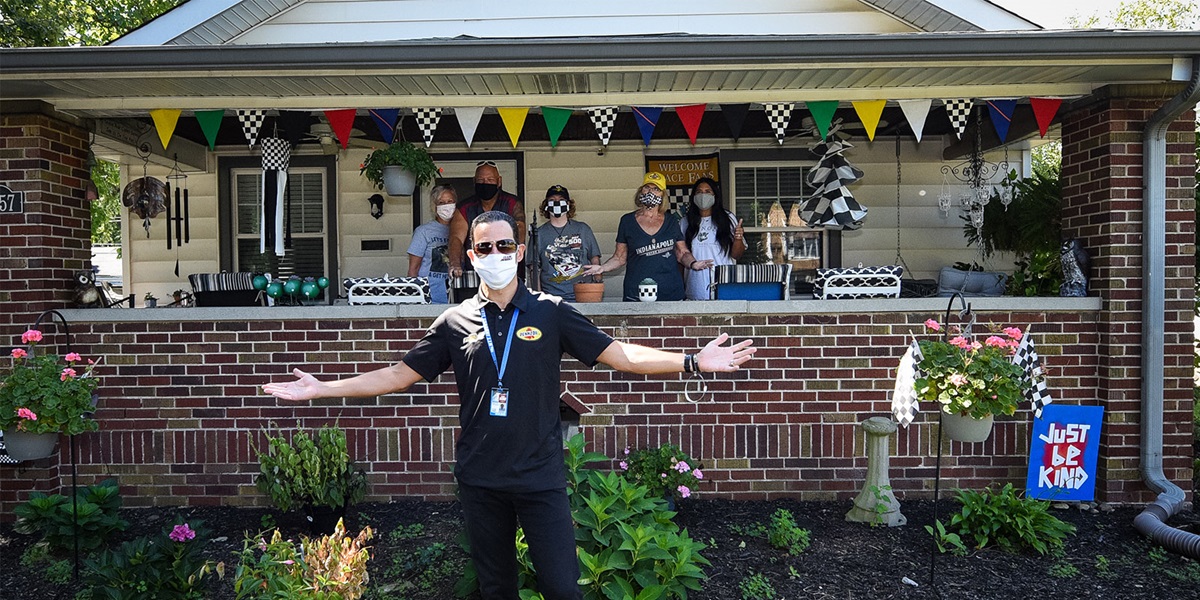 In a tribute to fans unable to attend the 104th Running of the Indianapolis 500 presented by Gainbridge, the 33 starting drivers made surprise visits to longtime “500” ticket holders in the neighborhoods near the Indianapolis Motor Speedway on Saturday, Aug. 22 to thank people for their support.

The unique pre-race celebration saw the drivers in 2020 Chevrolet Camaro 2SS convertibles in front of 33 different homes throughout the Town of Speedway. While adhering to local health protocols, the drivers delivered overflowing gift bags from IMS, INDYCAR, Pepsi and Miller Lite, among other event partners.

The event followed the annual Indy 500 Drivers’ Meeting – held virtually this year – and included a parade of the red convertibles down Speedway’s Main Street, where drivers saluted an enthusiastic gathering of local residents and employees and patrons of local businesses.

“Utter surprise and excitement,” Hamm said. “I’ve lived here more than 30 years, parked cars and made breakfasts for people on race morning but this …”

One of Hamm’s first reactions was to have the Andrettis sit in her white front porch chairs.

Said Marco: “We’ll be back for dinner.”

The Andrettis will be honored at the start of Sunday’s race. Mario will drive Honda’s Fastest Seat in Sports two-seater Indy car with his son, Michael – Marco’s father – riding in the back seat, putting three generations of one of racing’s most famous families on the track at IMS together for the first time. The two-seater is part of the ceremonial pace laps to begin NTT INDYCAR SERIES races.

The 200-lap race airs on NBC at 1 p.m. (ET), with Central Indiana fans able to view the race live on WTHR-13 in its entirety for only the third time in its history. The first local airing was in 1949; the second was in 2016 when the 100th Anniversary race was deemed a sellout.

The field is expected to take the green flag at approximately 2:30 p.m. NBC and the Pennzoil INDYCAR Radio Network will have the coverage locally and nationally.

This race features eight former “500” winners, including Helio Castroneves, who is bidding for his record-tying fourth victory at IMS, all with Team Penske. A.J. Foyt, Al Unser and Rick Mears are the only drivers to have won “The Greatest Spectacle in Racing” four times. Mears was the most recent to join the club, in 1991.

Rinus VeeKay of Ed Carpenter Racing will start fourth, the highest-starting rookie among the five in the field. Alex Palou of Dale Coyne Racing with Team Goh joined VeeKay in last weekend’s Fast Nine Shootout for the fastest nine qualifiers.

The second half of the field is loaded with accomplished drivers. One-time “500” winners Will Power of Team Penske (2018) and Tony Kanaan of A.J. Foyt Racing (2013) will start next to each other in Row 8; Pagenaud, who won for Team Penske last year, will line up in Row 9 alongside two-time Formula One World Champion Fernando Alonso; and Castroneves will start from the inside of Row 9.

Other former winners include Andretti Autosport drivers Ryan Hunter-Reay (2014) and Alexander Rossi (2016). They will start fifth and ninth, respectively.

IMS officials announced Aug. 4 that this race would be staged without spectators due to conditions related to the COVID-19 pandemic.