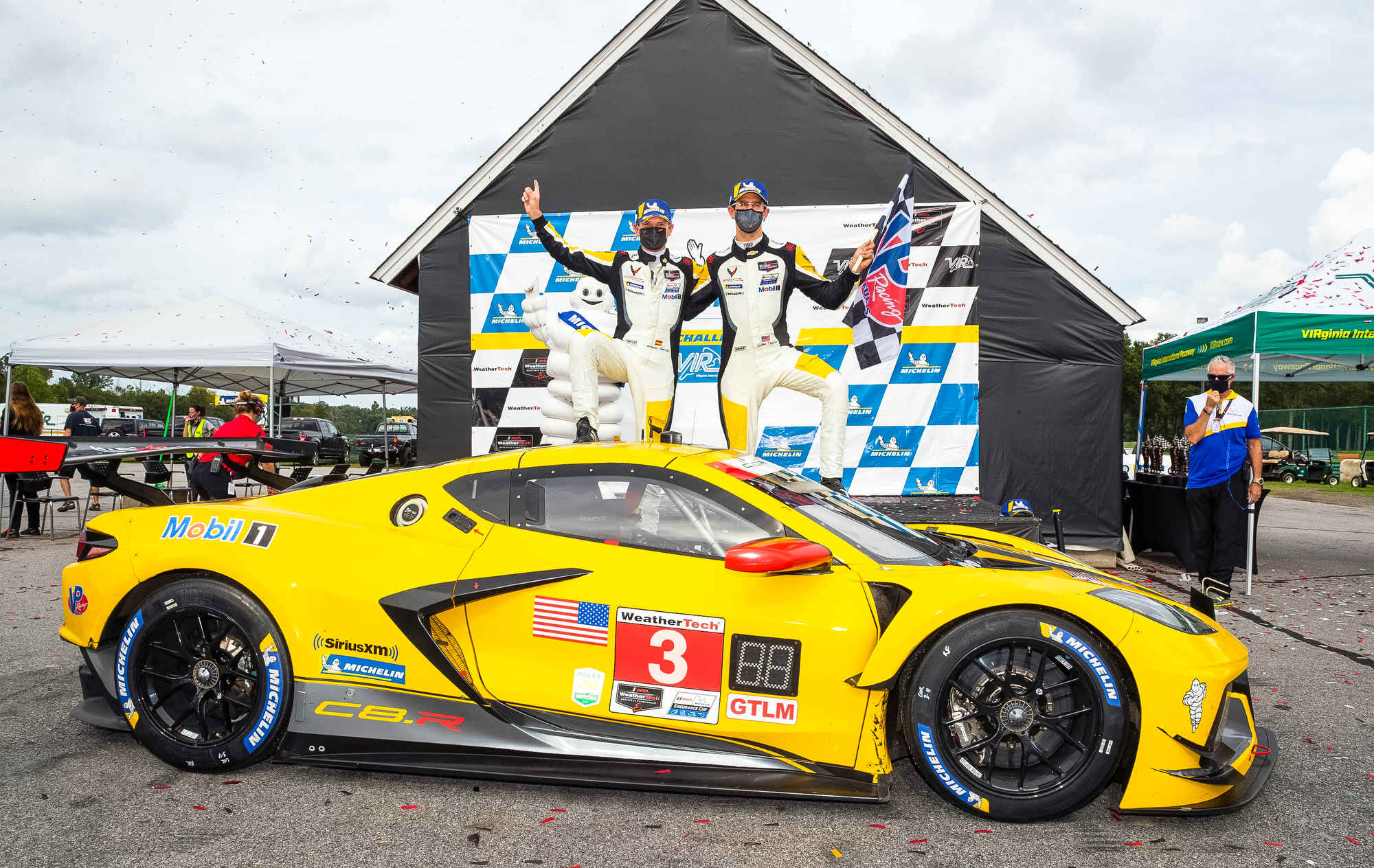 DANVILLE, Va. – At first, Antonio Garcia didn’t know what was causing the vibration that was buzzing through his car. He knew only that he had to make the car reach the finish line before the competitors bearing down on him.

The issue was a broken rear diffuser, and Garcia carefully directed his rattling, wounded Corvette C8.R to the finish line Saturday for an unexpected victory in the Michelin GT Challenge at VIRginia International Raceway. It was the third win of the 2020 IMSA WeatherTech SportsCar Championship season for Garcia and co-driver Jordan Taylor.

Garcia took the lead unexpectedly when Nick Tandy was forced to pit with a cut left rear tire with 18 minutes left in the two-hour, 40-minute race, then held off a charge from Bruno Spengler and Tandy to score Corvette Racing’s fourth consecutive victory – the No. 3 teammates won on July 4 at Daytona and earlier this month at Road America, while teammates Tommy Milner and Oliver Gavin won last month’s race at Sebring in the No. 4 C8.R – in the GT Le Mans (GTLM) class.

But nothing about this one was easy. For a moment after he took the lead, Garcia didn’t think he’d be able to maintain it.

“I thought it was terminal because it was vibrating really bad,” Garcia said. “But once I got used to it and knew it wasn’t interfering with the performance, I knew I could handle it. With the gap I could manage to the BMW. It was stressful not knowing what would happen if the rear diffuser would have fallen off, but the C8.R held on.”

Tandy had a sizable lead late in the race when the No. 911 Porsche GT Team Porsche 911 RSR-19 before his late, unscheduled pit stop. That gave the lead to Garcia’s No. 3 Corvette Racing Chevrolet Corvette C8.R he shared with Jordan Taylor. With the vibration causing him to back off, his lead over Spengler’s No. 25 BMW Team RLL BMW M8 GTE and Tandy’s No. 911 Porsche GT Team Porsche 911 RSR-19 began to evaporate.

As soon as Tandy drove to the pits, Garcia noticed the vibration.

“I saw him pull in the pits and I went by the front straight the whole thing started to shake a lot,” Garcia said. “So, the C8.R is also good with almost no rear diffuser or rear splitter. I’m very proud of that. Very proud that everything stayed in one piece even though it was very challenging to drive there at the end.”

From start to finish, the race threw unexpected challenges at drivers and teams. The No. 911 Porsche twice had flat tires. Just 22 minutes into the race, Fred Makowiecki experienced the first puncture, but pitted and regained the lead under caution just 13 minutes later.

Then, just when it looked as if Tandy would bring the No. 911 home to victory, he limped to the pits, then roared back to challenge Spengler for second place with a late charge that included the fastest lap of the race. In the end, Spengler, who teamed with Connor De Phillippi in the No. 25 BMW, held on for second, 3.521 seconds behind Garcia.

“For sure, it felt like an endurance race with all the issues people were having,” Taylor said. “Mistakes, going off the track, damage issues, tire issues. It was about minimizing mistakes. It’s not like an IMSA race to have that many issues. For us, we had the least amount of mistakes and that’s why we won.”

The victory allowed Taylor and Garcia to extend their WeatherTech Championship GTLM points lead to 19 – 165-146 – over the defending GTLM champions Earl Bamber and Laurens Vanthoor, who finished fifth in class today in the No. 912 Porsche.