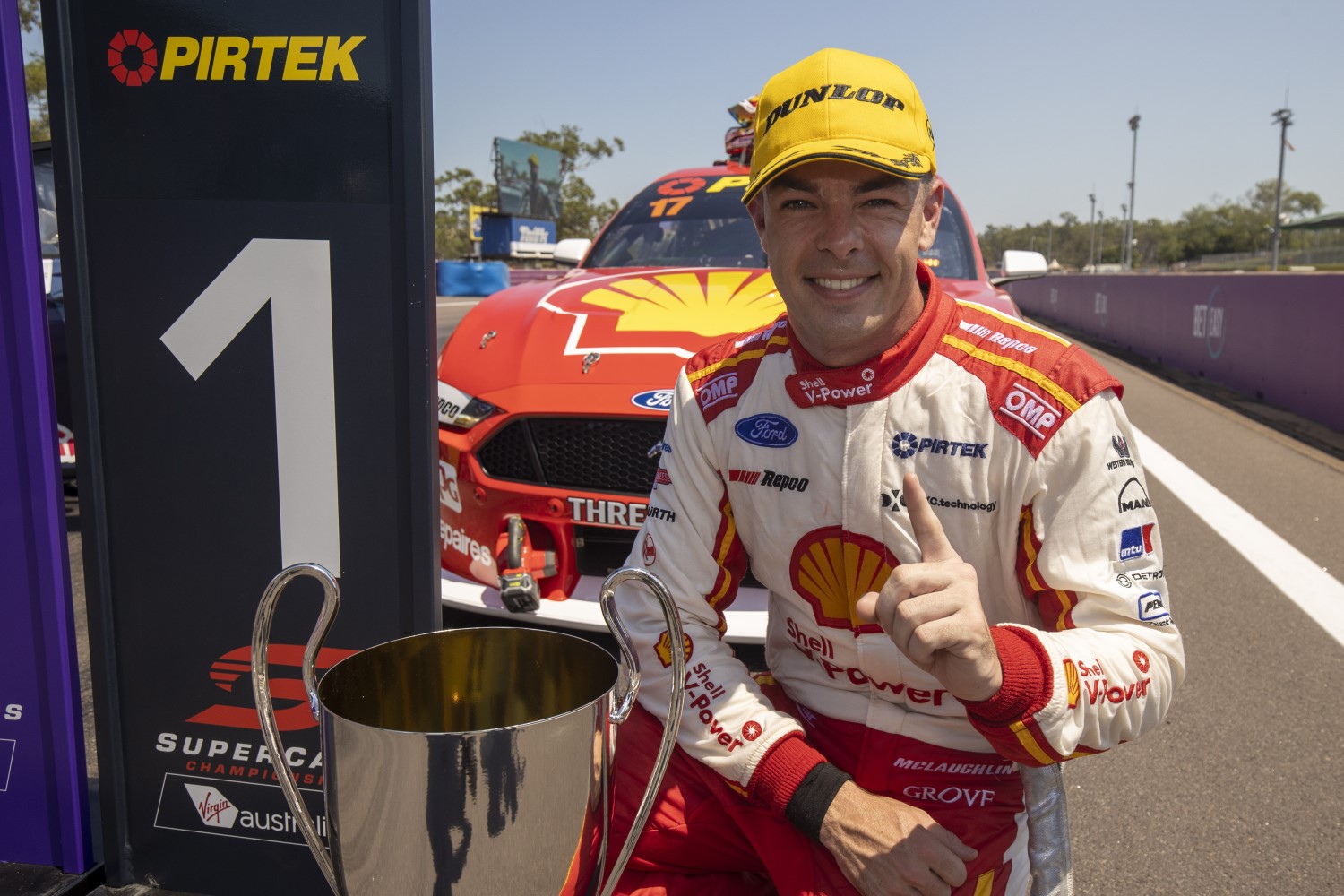 Scott McLaughlin made it three wins from three starts at the CoreStaff Darwin SuperSprint, proving unstoppable during Supercars’ second weekend in the Top End.

The third 38-lap contest was another straightforward affair for the two-time defending champion, taking the lead from the outside of the front-row and never looking threatened.

In the opening race, McLaughlin had the perfect start and from there wasn’t challenged, streaking away to win from van Gisbergen, who held off the fast-finishing DeWalt Racing Commodore of Scott Pye. Whincup finished Race 17 in sixth position.

The third 38-lap contest was another straightforward affair for two-time defending champion McLaughlin, taking the lead from the outside of the front-row and never looking threatened.

McLaughlin cruised to a 13.8-second victory over Brad Jones Racing’s Nick Percat, while Scott Pye scored his second podium in as many races for Team 18.

Extending his championship lead, McLaughlin also picked up the one-off Territory 2.0 trophy, awarded to the highest points-scorer of the weekend.

“I love the track and I love it when my car is like that,” said McLaughlin.

“That’s hands-down probably the best car I have ever driven, just all weekend it was so solid.
“We had a good start and were able to use our tires and do what we wanted to do.”

Mark Winterbottom started third and finished fourth, but it was far from an easy ride for the second Team 18 Commodore.

Seventh for Whincup came despite a Turn 1 scrape with Cameron Waters on the Red Bull Holden’s out lap that broke the steering on the Monster Mustang, putting it out of the race.

Waters attempted an inside pass on Whincup, but bounced off the inside curb, resulting in the front-wheel of the Mustang bumping into the Commodore.

Fabian Coulthard made progress from 16th on the grid to take the flag 10th, but dropped a spot thanks to a five-second time penalty for a mid-race bump-and-run on Bryce Fullwood.

After two weeks in Darwin, the Virgin Australia Supercars Championship will drive across the top end to continue racing next weekend with the first of two consecutive events in Townsville, the NTI Townsville SuperSprint.

“We’ve made an absolute jet out of this car; we’ve been working on it all week. Having back-to-back rounds has been good. Being able to come back to the track and go on a track walk with Ludo was a good opportunity for him to really understand what I wanted from the car. And today, that is exactly what he gave me.”

“It’s all preparation, and I’m just really proud today because the car was phenomenal. To pull a gap like that in a field that is this tight is a really proud moment for our team.”

“I have worked hard on my starts – I’ve got a really nice procedure and I feel for the bite point now. When I first started I was pretty average and stalled it a lot, but I’ve worked on it and it’s a confidence thing. That last start was the best start of the weekend for me.”