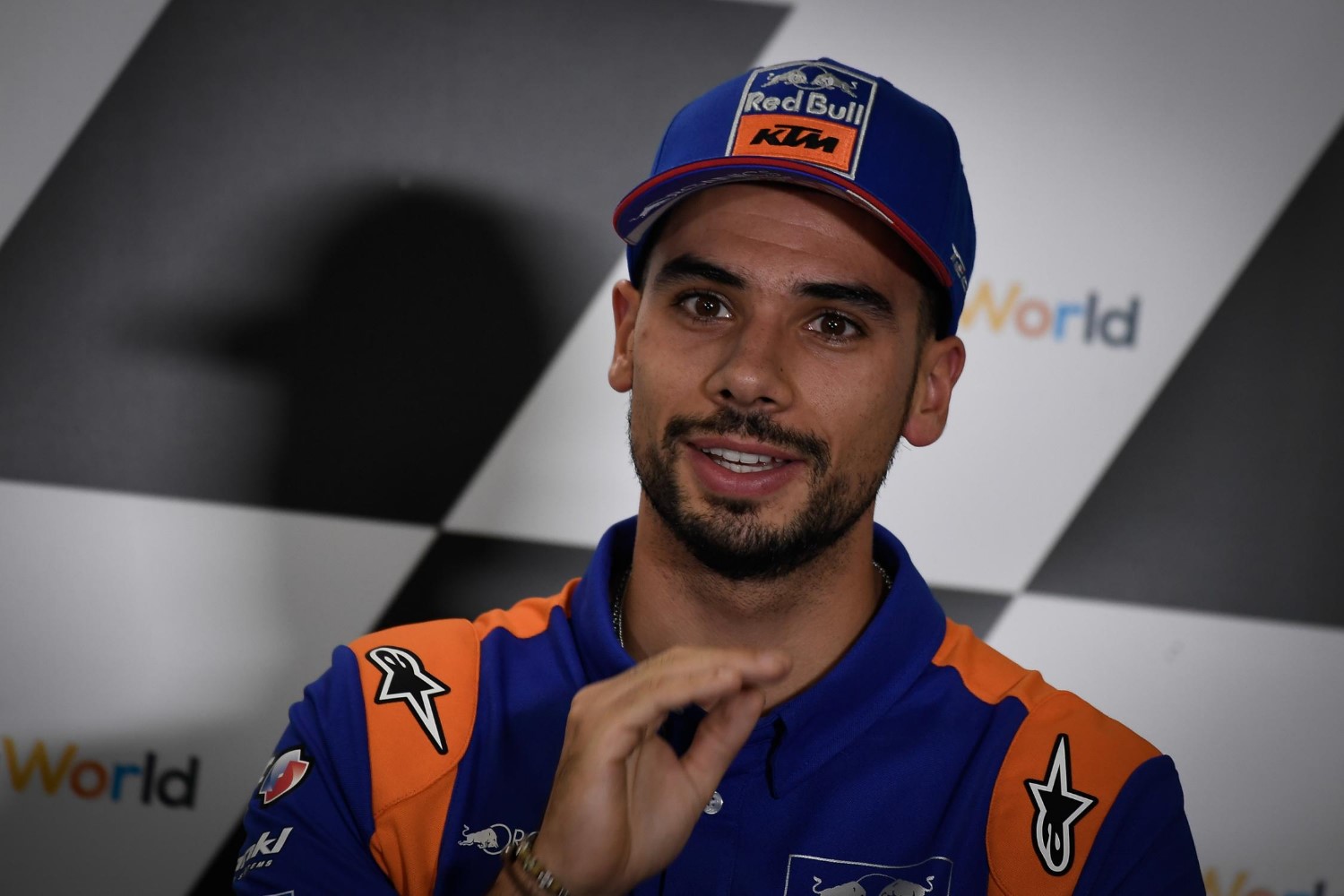 In a dramatic red-flagged BMW M Grand Prix of Styria, Miguel Oliveira got the better of Jack Miller and Pol Espargaro at the famous final corner, on the final lap, to win his first MotoGP race in the 900th premier class contest.

A stunning victory for Oliveira who hands Portugal and Tech 3 their first premier class wins, in his 150th Grand Prix.

Today’s initial 28-lap race started in overcast conditions, quite opposite to the clear skies and high track temperatures that the Michelin Power Slick tires had been subjected to in the previous days. With the asphalt reaching above 50°C on Friday and Saturday, the riders had set-up their bikes to get the most from the tires in yet more extreme conditions, but when the lights changed to signal the start of the race the track temperature was only 36°C, resulting in changes on the grid as riders and teams tried to make informed decisions.

The original race was halted when Vinales had to bail off at 230 km/h due to brake failure into turn one, the Spaniard was unharmed but his bike destroyed the air fence.

Having been battling brake issues all race, Vinales was forced to jump off his Yamaha at 130mph (209.21 km/h) when it wouldn’t slow, with the bike bursting into flames as it hit the air fence.

Mir had been leading from Nakagami and Miller when the race was stopped  on lap 16 but did not have a new front tire for the restart with 12 laps to go, when many other riders also switched from a medium to soft rear.

Before the start of the initial race, dark clouds were starting to creep over the Styrian mountains to raise the pulsating tension further. A flag-to-flag race was becoming an ever-increasing possibility, but weather forecasts were saying there shouldn’t be any heavy downpours for the race.

Despite the clouds looming, it was a dry start. But there was nothing dry about the opening exchanges. Joan Mir (Team Suzuki Ecstar) got a fantastic launch from P3 to snatch the hole shot from polesitter Pol Espargaro, with Miller also getting away well from fourth on the grid. The Australian wasted no time in getting past Espargaro as Miller dived up the inside at Turn 2, before Miller was leading the race – despite shoulder troubles – after Mir was forced to drop a position for running wide and gaining an advantage at Turn 1 on the opening lap.

Fabio Quartararo (Petronas Yamaha SRT) didn’t get the start he was looking for, and the Championship leader dropped to P14 after running wide at Turn 1. Andrea Dovizioso (Ducati Team) made a solid start and was up to sixth on Lap 2 as another Ducati led. Miller was holding the baton with Mir and Takaaki Nakagami (LCR Honda Idemitsu) in hot pursuit, the Japanese rider getting the better of Pol Espargaro on the opening couple of laps with the top three slowly pulling clear of the chasing pack.

Lap 5 saw Mir lead the race and the Suzuki man, Miller and Nakagami saw themselves half a second clear of Pol Espargaro and Alex Rins (Team Suzuki Ecstar). And that gap kept climbing. On Lap 8 the leading trio were 1.4 clear, with the Yamahas dropping down the field. Maverick Viñales (Monster Energy Yamaha MotoGP) was looking pretty good in seventh but the number 12, Quartararo and Valentino Rossi (Monster Energy Yamaha MotoGP) were P9, P10 and P11 – and struggling. Quartararo’s brake issues were seemingly plaguing the Frenchman again. Title rival Dovizioso also couldn’t find the pace he’d shown all weekend as Brad Binder (Red Bull KTM Factory Racing) and Oliveira got the better of the Italian.

Up front, Mir was now stretching his lead. The Spaniard, fresh from his first podium seven days ago, was gapping Miller and Nakagami and by Lap 13, Mir’s lead was up to 1.3 seconds. Miller and Nakagami were, in turn, two seconds clear of Pol Espargaro and Rins as Nakagami eventually got the better of Miller on Lap 16. The LCR man made his move at Turn 6 as he set his sights on Mir, who was two seconds up the road, but there was drama to follow in Styria.

A few laps prior, Viñales slowed up and held his hand up to suggest something was wrong with his YZR-M1. Down in P13, Viñales continued but then, with 12 laps to go, the Spaniard had to bail. Viñales jumped off his Yamaha at Turn 1 in what looked like a brake failure. His machine rocketed into the air-fence at Turn 1, deflating it, with his bike going up in flames. Thankfully, Viñales was able to walk away relatively unharmed in a scary incident. This brought the red flags out as the race came to a halt, with a 12-lap dash to follow.

The lights went out for a second time and Mir got the perfect start from pole, with Miller getting bogged down from third. Pol Espargaro powered away from the line well but ran slightly wide into Turn 1, allowing Miller to regain ground on the run into Turn 2 and 3. Miller, sporting fresh soft Michelin front and rears, was then leading. The GP20’s brutal speed was too much for Mir’s GSX-RR and the Aussie was through. Mir fought back on the exit but the Ducati rider held the inside line for Turn 6, with Nakagami getting beaten up at the start as the Japanese rider dropped to seventh.

The lights went out for a second time and Mir got the perfect start from pole, with Miller getting bogged down from third. Pol Espargaro powered away from the line well but ran slightly wide into Turn 1, allowing Miller to regain ground on the run into Turn 2 and 3. Miller, sporting fresh soft Michelin front and rears, was then leading. The GP20’s brutal speed was too much for Mir’s GSX-RR and the Aussie was through. Mir fought back on the exit but the Ducati rider held the inside line for Turn 6, with Nakagami getting beaten up at the start as the Japanese rider dropped to seventh.

Just like they were in the opening race, KTM’s Oliveira and Binder were scrapping away in the fight for P4, with Dovizioso up with the leading group. Leading the race, Miller slammed in a 1:23.928 as the pace in the restarted contest was electric. Mir was second but the Spaniard had to tackle the second race on the same front tire he used to pull clear of the field before the red flags – and it looked like it was costing him.

With eight laps to go, Pol Espargaro set the fastest lap of the race. The KTM rider then made his move on Mir at Turn 3 and the number 44 was then clambering all over the back of Miller. Pol then attempted a pass up into Turn 1, but he was in deep and wide, allowing Miller to blast straight past and Oliveira and Mir to close in – the Portuguese rider now up into third.

The leading quartet was gapping Dovizioso and Nakagami with the Austrian GP race winner starting to make uncharacteristic mistakes. Dovi was wide at Turn 1 and then wide again at Turn 9 with six laps to go as he desperately tried to keep tabs on the leaders. And it was a lead group of seven with six laps remaining, with Binder then losing touch as the South African ran wide at Turn 1 with five to go.

This was a proper scrap for the win. Pol took the lead from Miller at Turn 9, but he wasn’t able to pull the pin. Mir was then wide at Turn 4, allowing Dovizioso to grab fourth as Miller and Oliveira tagged onto the back of Pol’s RC16. The top five were close, however Mir and Dovizioso were about to drop off the pace slightly with Dovi running wide again at Turn 9.

Heading onto the last lap, this was between two KTMs and a Ducati. Pol Espargaro vs Miller vs Oliveira. Two riders chasing their first win, one chasing their first dry race win. Pol led onto the last lap and got a good run out of the first corner – vital. But coming into the braking zone, Pol went very defensive – too defensive. This compromised his exit and Miller was using all the power his Ducati had left to reel in the KTM. On the brakes, Miller was alongside Pol and made the move stick into the tricky, downhill right-hander.

Miller held firm through the left-handers but coming up was where Pol was strongest. Pol got the run up the hill and swerved to the inside and got underneath Miller. This was tantalizing scenes in Styria as it all came down to the final corner, on the final lap – something we’ve seen here before. Getting a better run down into Turn 10, Miller broke late and dived underneath Pol. The duo went wide though and guess who was waiting in the wings to pick up the pieces? Yes, Oliveira. Staying on his normal line, Oliveira blasted past Miller and Pol to seal a historic victory for himself, Portugal and Tech 3. Miller held onto second to pick up his second Red Bull Ring rostrum of 2020, with Pol claiming P3 to pocket his first dry podium in MotoGP – 0.540 splitting the podium finishers.

You’ve got to feel sorry for Mir. Despite a great fourth place, Sunday in Styria could have been so much more. Two seconds clear before the red flag, the sophomore was on his way to a maiden premier class win, but it wasn’t to be, with Mir having to use that heavily used front tyre for the restart which ultimately cost him. Nevertheless, P2 and P4 from Austria and Styria is vital points for a Championship battle that is completely wide open.

Dovizioso couldn’t make it two-from-two as the Italian crossed the line 5th, 1.4 from the victory. Dovizioso closes in the gap to Quartararo though, the title race has taken a huge twist with the gap now just three points. Another unfortunate victim from the red flag was Nakagami, who has to settle for P7 in Styria after looking odds on to picking up a maiden podium. Binder’s Turn 1 run-off cost him a chance of a top six finish, the Czech GP winner crossing the line four tenths clear of leading Yamaha rider Rossi. It was a dismal day for the Iwata factory with Viñales’ crash seeing the Spaniard take zero points from Styria. Quartararo’s P13 finish ultimately keeps him top of the standings, but the Yamaha riders will be happy to see the back of the Red Bull Ring.

The enormity of the victory is still sinking in for the @Tech3Racing rider! 🤯😂#AustrianGP 🏁 pic.twitter.com/o3ikdp914H