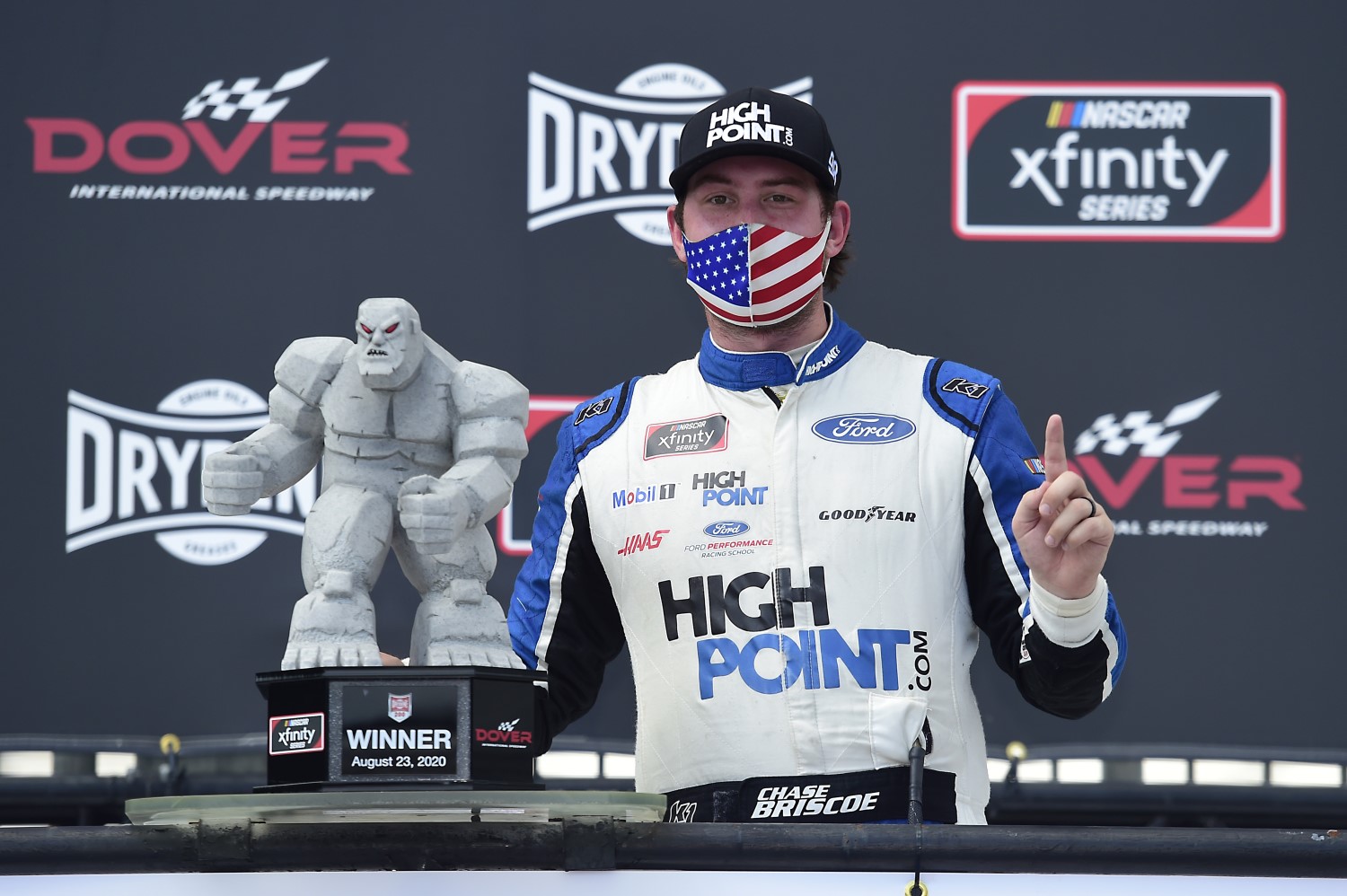 A day after spinning his No. 98 Stewart-Haas Racing Ford into the inside wall at Dover International Speedway, Chase Briscoe dominated the Drydene 200, winning the second leg of a Saturday/Sunday NASCAR Xfinity Series doubleheader.

Starting from the rear of the field in a backup car, Briscoe took control of the race with 20 laps left in the second stage and never looked back. All told, he led 107 of 200 laps at the Monster Mile, only surrendering the top spot during a cycle of pit stops during the closing 103-lap green-flag run.

Perhaps more important, Briscoe reclaimed the momentum he enjoyed while winning five of the first 13 races of the season. More recently, Austin Cindric had pulled even with his close friend and fellow Ford driver by winning five of six events.

Despite the wreck in Saturday’s event, Briscoe was confident enough to tell wife Marissa that he was going to win on Sunday. Marissa told the world about the conversation in a tweet that said, “Chase called me before the race and said, ‘I’m going to win the race today.’ Bring it home, babe!!”

“I told her today I was so mad after yesterday, I had to go win,” Briscoe acknowledged after the race. “It’s just a testament to these Stewart-Haas guys to pull a backup out—honestly, it was better than our primary, I thought.

Even though he called his shot, the victory brought a welcome sense of relief.

“We hadn’t won in a month and a half, but it feels like five years,” said Briscoe, who collected his first win at Dover and the eighth of his career. “We’re coming back where I felt like we were at the beginning of the year.

“Truthfully, I felt like today was the most dominant car we’ve had all year long. Hopefully, we can continue that trend. It feels good to be back in Victory Lane—that’s for sure.”

Briscoe finished 2.463 seconds ahead of runner-up Ross Chastain, who improved one spot from Saturday’s finish. Though Briscoe muscled his way past Chastain’s No. 10 Kaulig Racing Chevrolet after the final cycle of pit stops, Chastain minimized the contact and instead expressed his delight at being competitive with the cars that have dominated the series this year.

“To come here and run with that car (Briscoe), the 22 (Cindric) and those guys that have been kicking our butts all year is a big statement,” Chastain said. “We did it both days. We were consistently up there.

“I’m just happy that we had the speed. When we win, we’ll win a lot. Today is what it is, and no hard feelings.”

Cindric ran third—his worst finish in the last eight races—followed by Brandon Jones, Daniel Hemric, Noah Gragson, and Saturday winner Justin Allgaier, as only seven drivers finished on the lead lap. Chastain won the first stage before Briscoe completed his run from the rear of the field and took control.

Note: There were no major issues in post-race inspection in the Xfinity Series garage. One car was found with one unsecured lug nut — the No. 18 Joe Gibbs Racing Toyota of ninth-place finisher Riley Herbst.