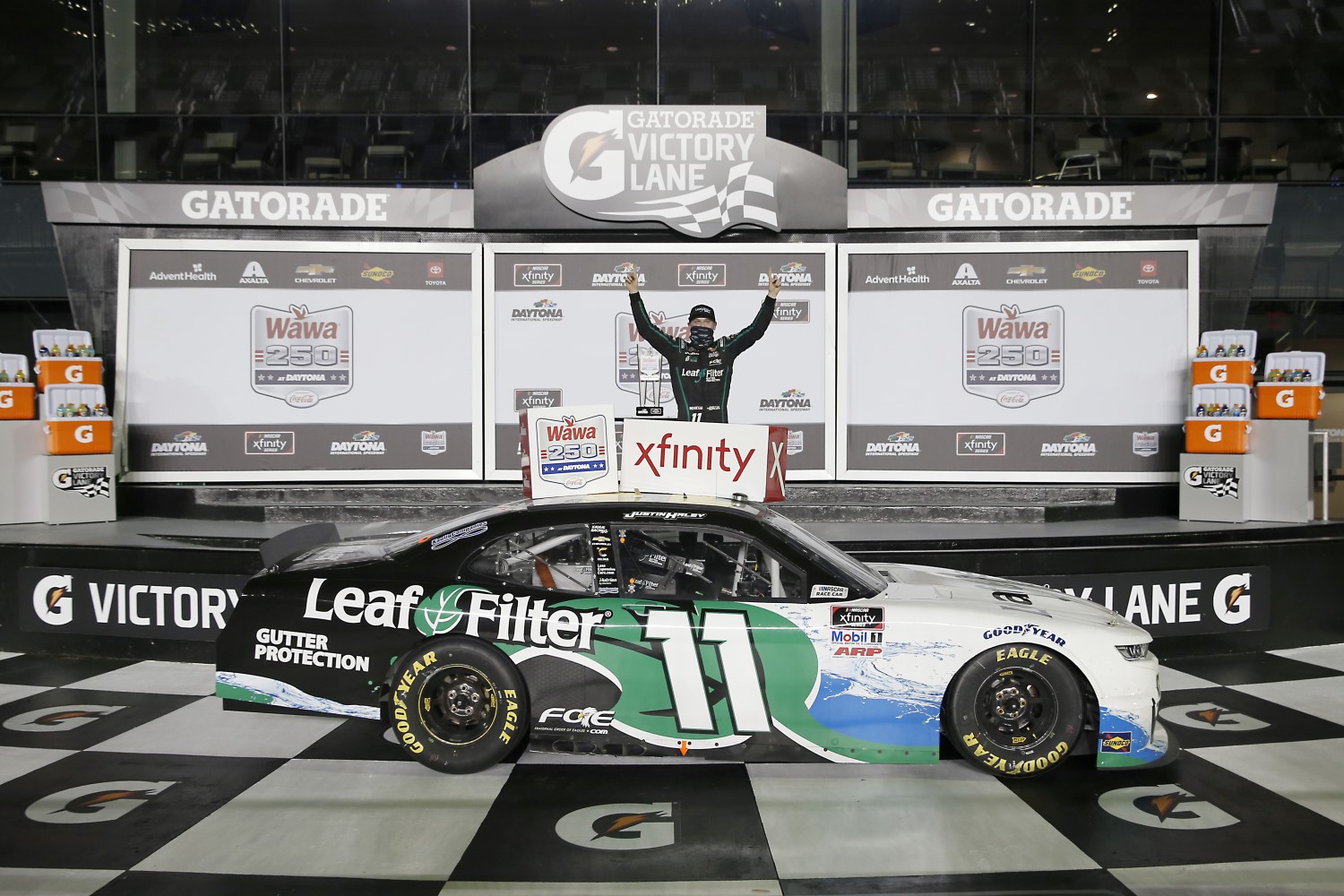 Teamwork was the buzz word of the night for the Wawa 250 Powered by Coca-Cola NASCAR Xfinity Series race at Daytona International Speedway, but ultimately it came down to team members aggressively deciding the win amongst themselves instead of a team versus team surge for the checkered flag.

Ross Chastain tagged the left rear of his Kaulig Racing teammate – and the race leader –  AJ Allmendinger’s Chevrolet on the final lap in the final turns sending both cars into the wall while their other teammate Justin Haley surged through the field to the checkered flag. It was the 21-year old Indiana-native’s second career Xfinity Series win matching his work at the sport’s other big track, Talladega Superspeedway earlier this season.

Haley, the driver of the No. 11 Kaulig Racing Chevrolet edged Gray Gaulding – who was making his second start of the season – by a mere .253-seconds for the victory. Chase Briscoe, Riley Herbst and Harrison Burton rounded out the top five. Chastain recovered to finish sixth, followed by Michael Annett, Austin Cindric, Josh Williams and Jesse Little.

“Just a little lucky there, I got shucked out and I was a little frustrated but that’s why you never give up,” he added. “These things are so unpredictable.”

After the race, Chastain – who along with Haley are Kaulig Racing’s two full-time drivers – offered his thoughts on the contact with his teammate but he was resolute in his decision to go for the win.

“It doesn’t matter how many races each of us run,” Chastain said referring to Allmendinger’s part-time schedule. “We’re supposed to go for the win. Team rules are the last 10 laps and we all stay committed. I hate that Justin go shucked out there with five to go.

“But coming to the checkered [flag], what am I supposed to do? Finish second? Not this guy.”

Allmendinger ended up 15th and the veteran was obviously disappointed in the outcome and the manner of the outcome. However, he noted the importance of the victory for the team.

“It’s racing. And congratulations to Justin Haley for getting a Kaulig Racing Chevrolet into Victory Lane. That’s the most important thing.”

Two drivers still closely battling for the 12th and final playoff position – Brandon Brown and Jeremy Clements turned in a dramatic evening. Brown scored stage points by finishing fourth in Stage 1 and that ultimately proved to be vital for his championship chances considering both cars suffered some damage in a multi-car accident midway through the race.

Clements finished 20th and Brown was 26th. The stage points were enough to keep Brown in that 12th place transfer position, with a 32-point advantage over Clements as the series moves to historic and historically tough Darlington Raceway next week.

Cindric’s eighth-place finish was good enough to keep him atop the championship standings by 58 points over Chase Briscoe.

Chase Briscoe (third) and Austin Cindric (eighth) drove to top-10 finishes to lead Ford in the WaWa 250 at the Daytona International Speedway on Friday evening.

“There at the end I felt like we were in a pretty good position,” said Briscoe.  “The three Kaulig cars were so fast and you knew if you made a move on one of them you wouldn’t be able to clear the other two. We found out they were going to be a little tight on fuel so we tried to move up to the top to run them out.

“I felt like I had to split them up if I had any chance and I was able to split the 11 from the 10 and as soon as I got where I was behind Cindric instead of Cindric pushing me my car wasn’t near as good and I couldn’t even get to him to help him. I think with two to go I was fourth, white flag I was ninth and we ended up third.

“That is Daytona. We ended up being in the right place at the right time. Overall, to come out of here in third is always good and now we get to go to Talladega with a clean Ford Performance Racing School Mustang to take there and that will be big.”

“It was an unfortunate end for my Odyssey Battery Ford Mustang team,” said Cindric. “We were in a good position working with our Ford teammate, Chase Briscoe all night but that’s the way superspeedway racing goes sometimes.

“We had a clean car all night until we got to Turn 4. I’m really looking forward to Darlington next weekend, especially with the speed we’ve had all year on the intermediate speedways.”