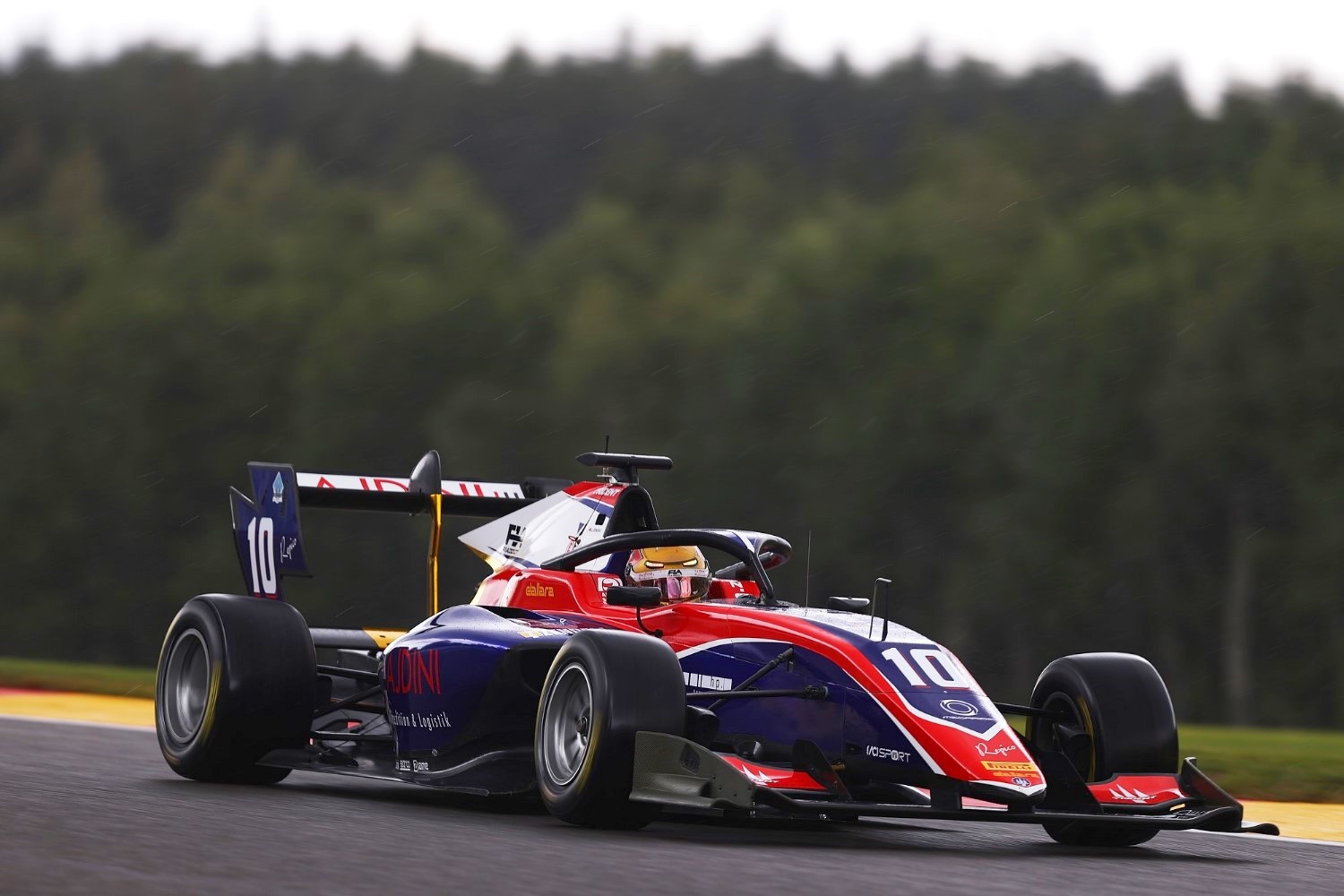 The German ensured there could be no repeat of his last lap denial at Silverstone, when Bent Viscaal past him on the final turn of the race, by putting a solid gap between himself and Pourchaire in P2.

Trident’s day got even better when David Beckmann took the final podium position, while Olli Caldwell claimed his third points finish in seventh.

Alex Smolyar also sealed his best ever finish in F3, taking fourth ahead of new Championship leader Oscar Piastri. The Australian made the most of mechanical troubles for Logan Sargeant, getting ahead in the final few laps and taking first place in the standings with it. The American eventually dropped to eighth.

Heavy rain had fallen over the circuit during the night, but the track was dry when the lights went out, and Zendeli got a clean getaway off the line.

The Trident zipped forward, while Pourchaire got himself stuck in a bunch behind him. The Frenchman initially went left, but there was no room to maneuver, so swung to the right, and found himself surrounded. He hung on to P2 but had lost ground in his fight for first.

The top five remained unchanged on the opening lap, but Richard Verschoor lost a place to Liam Lawson after going wide on the run down to the first corner.

There was a brief Virtual Safety Car period when Alessio Deledda lost control at the chicane and beached his Campos in the gravel trap. Zendeli made little fuss of the restart, darting back off ahead of Pourchaire, who was battling to remain in DRS range.

The second Trident of Beckmann was locked in battle with Smolyar for the final podium position. The German jostled ahead at the restart, but the ART Grand Prix driver wasn’t backing down and wrestled himself back in front. Their duel continued for another lap, but Pourchaire pulled out of DRS range from the Russian and there was little Smolyar could do to prevent Beckmann lunging past at Turn 7.

Piastri had no trouble getting ahead of Verschoor for sixth, but the battle to catch his title rival, Lawson, was proving a little more troublesome. The duo went wheel-to-wheel and kissed tires, which forced them both wide. Piastri found himself ahead when they returned to the road, but let the Hitech man back in front in a bid to avoid a potential penalty.

Sargeant warned his team he was having issues from fifth, as Piastri overtook Lawson cleanly. The Kiwi was also on the radio telling Hitech he was having issues. Sargeant was desperately battling to avoid the same outcome, well aware that if the Australian passed him he would take the Championship lead.

Eventually Sargeant succumbed, as Piastri roared down the left of him ahead of Eau Rouge, making it stick as he entered the turn. The third PREMA of Frederick Vesti compounded the American’s misery, sliding past with ease – Sargeant was now facing a fight just to remain in the points.

Out in front, Zendeli eased to an untroubled first victory, 4.7s ahead of Pourchaire, with the second Trident of Beckmann taking the final podium position. Smolyar clinched fourth ahead of Piastri, with Vesti sixth and the final Trident of Caldwell in seventh. Sargeant dropped back to eighth, ahead of Lawson and Verschoor, who had also tumbled down the order.

Piastri now sits in first place in the Drivers’ Championship on 140 points, five ahead of Sargeant. Beckmann is up to third with 109.5, while Lawson is fourth on 101, and Pourchaire fifth on 100. In the Teams’ Championship, PREMA remain first with 353.5 points, ahead of Trident on 194.5 and ART Grand Prix on 157. Hitech Grand Prix are fourth, followed by MP Motorsport.