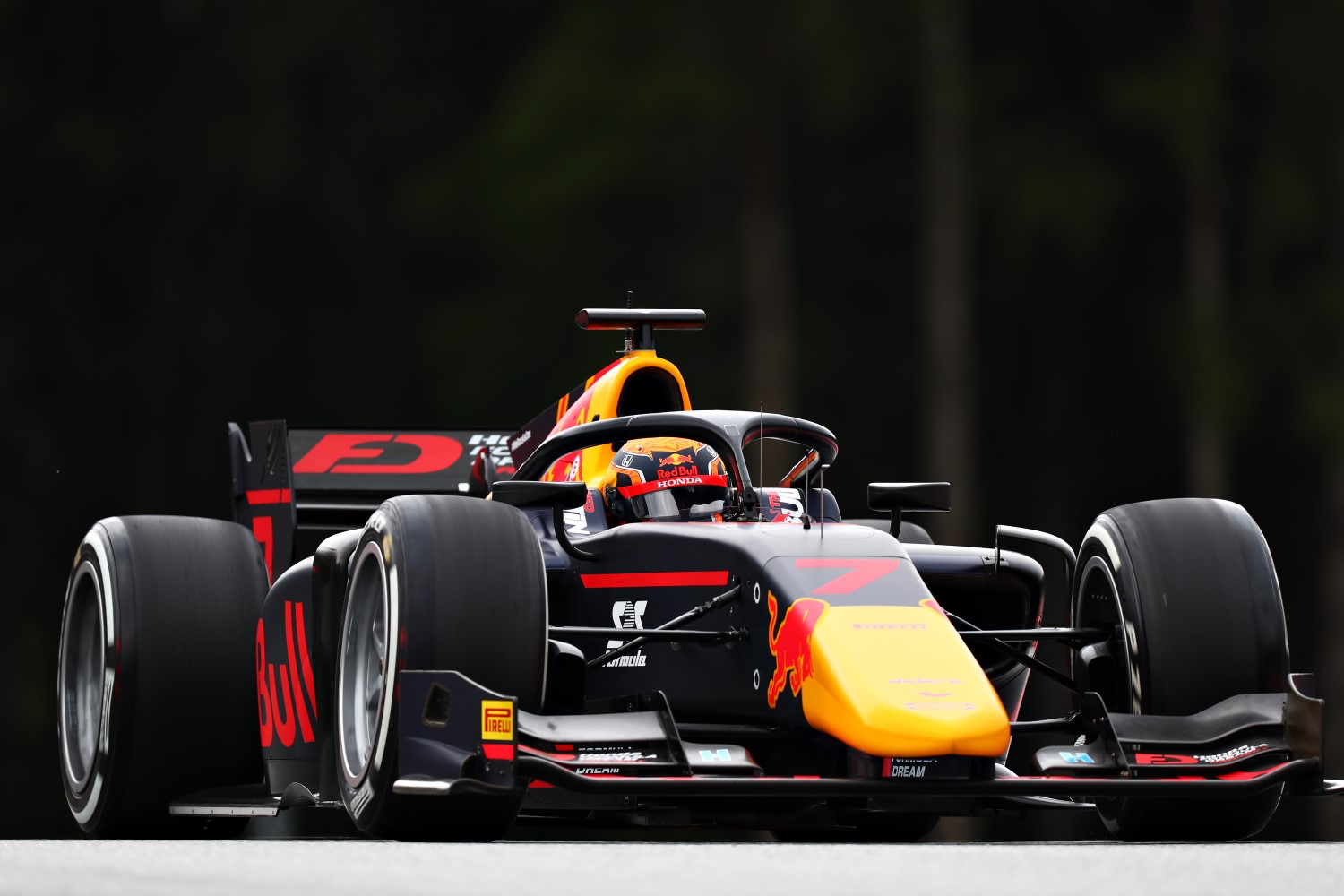 Nikita Mazepin crossed the line first, but it was Yuki Tsunoda who clinched a second FIA Formula 2 victory in the Feature Race at Spa-Francorchamps. A late time penalty for the Hitech Grand Prix driver dropped him down to second in dramatic circumstances.

The duo had diced back and forth for the entire race after a slow pit stop lost Tsunoda track position and gave Mazepin the provisional race lead. Tsunoda tried several moves to pass the Russian late on, but Mazepin clung on for the checkered flag before the Stewards felt his defending had been a little too strong. Mazepin was given a 5s time penalty for forcing the Red Bull junior off the road, costing him the win and dropping him to second.

Mick Schumacher took a cool and controlled fifth podium of 2020, steering clear of any drama to boost his own title chances and put him within 28 points of the Championship lead.

Robert Shwartzman clinched fifth and took a chunk out of Callum Ilott’s lead at the top of the standings, with the UNI-Virtuosi man finishing back in 10th.

Ahead of the Feature Race, the motorsport community united in loving memory of Anthoine Hubert, who tragically passed away in Spa-Francorchamps one year ago. Anthoine’s mother Nathalie joined Juan Manuel Correa and members of the F2 paddock, along with several Formula 1 drivers and team members, in a minute’s silence on the grid to pay their respects to the late Frenchman.

Tsunoda got a clean getaway from pole, but so did Mazepin from second and the Russian pulled up alongside him heading into the first turn. Going wheel-to-wheel, the Carlin racer had the inside line and held his nerve, braking latest and retaining the position.

Having missed the opportunity to steal first, Mazepin was suddenly drawn into the crowd behind him and Nobuharu Matsushita fizzed ahead for P2.

It was a mixed start for the top 10, Shwartzman was sluggish off the line and fell to seventh, as his teammate Schumacher lunged ahead into fourth place. Louis Delétraz was another to get away well and found himself in fifth at the exit of Turn 1. Meanwhile, Championship leader Ilott had already made up two places to P10.

Having momentarily slipped back, Mazepin reclaimed second from a helpless Matsushita on Lap 3. The MP Motorsport driver’s soft Pirellis were already looking battered and bruised, and he lost further places to Schumacher and Delétraz.

Matsushita’s day then got even worse. The Japanese driver had been reeled in by teammate Drugovich and the Brazilian attempted to dart to the right of him, but he ran out of room and the two came to blows. Drugovich attempted to back out of the move but clipped the right rear of Matsushita, destroying the tire and sending him spinning into the barriers. Matsushita clambered safely out of the car, with a Virtual Safety Car deployed, but his day was over while Drugovich required a fix-up in the pits.

Mazepin and Schumacher were the first to drop the soft tires for mediums. Tsunoda followed from first a lap later, but his stop was a poor one and he lost track position to Mazepin, who was now leading the drivers on the prime strategy. On the alternate strategy, Guanyu Zhou inherited the race lead with a 5s gap over second-placed Pedro Piquet. The UNI-Virtuosi driver was amongst the last on the medium tires to pit, returning in P6, but he instantly lost three places to Luca Ghiotto, Dan Ticktum and Piquet due to cold rubber. His teammate Ilott followed through not long after.

Zhou’s pit stop handed Mazepin the lead for the first time, but Tsunoda was only just over a second behind and fast gaining on him. It took him two laps, but the Carlin racer caught the Russian and attempted a daring move down the inside, but Mazepin refused to surrender the place, giving Tsunoda no choice but to back out and bounce across the curbs.

Zhou’s tires were finally warm, as he got a move on and regained the positions he’d lost after his pit stop. The Renault junior picked off Ilott first, before lunging ahead of Ghiotto as well.

Roy Nissany was also on the charge. The Trident man’s decision to opt for the alternate strategy was paying dividends, as he fired past Ilott and eyed up Ghiotto as well before making a DRS-enthused move on the Hitech driver down the inside for P8.

Mazepin thought he had begun to edge away at the front, but Tsunoda was clearly just biding his time, and he caught up again with two laps ago. Attempting a near identical move to the first on the Hitech driver, Tsunoda inched ahead but was forced wide again which returned him to second.

Mazepin crossed the line in first but was swiftly informed of a crushing 5s time penalty for forcing the Carlin driver off the road during the aforementioned move, promoting Tsunoda up to first and dropping Mazepin to second.

Nothing changed behind them, as Schumacher closed out his fifth podium of the season. Delétraz settled for fourth, ahead of Shwartzman, Ticktum and Zhou.

Nissany sealed his highest ever F2 finish in P8, followed by Ghiotto and Ilott. In the Drivers’ Championship, Ilott remains in first with 122 points, seven ahead of Shwartzman. Tsunoda is up to third on 111 points, while Schumacher is fourth and Mazepin fifth. In the Teams’ Championship, PREMA Racing are back on top with 209 points, five ahead of UNI-Virtuosi. Hitech Grand Prix are third, ahead of Carlin and ART Grand Prix.

“I am really happy to take P1 in the Feature Race. This is 100% for Anthoine Hubert. A big thanks to Carlin, Red Bull and Honda. It was not an easy situation, and I was a little bit unlucky during the pit stop, but after that I just pushed until the end as much as I could.

“Like Hubert last year, he pushed every lap, every race, and I just drove like him. I maybe couldn’t win in the race, but the final result is P1, and I am really happy with that.”