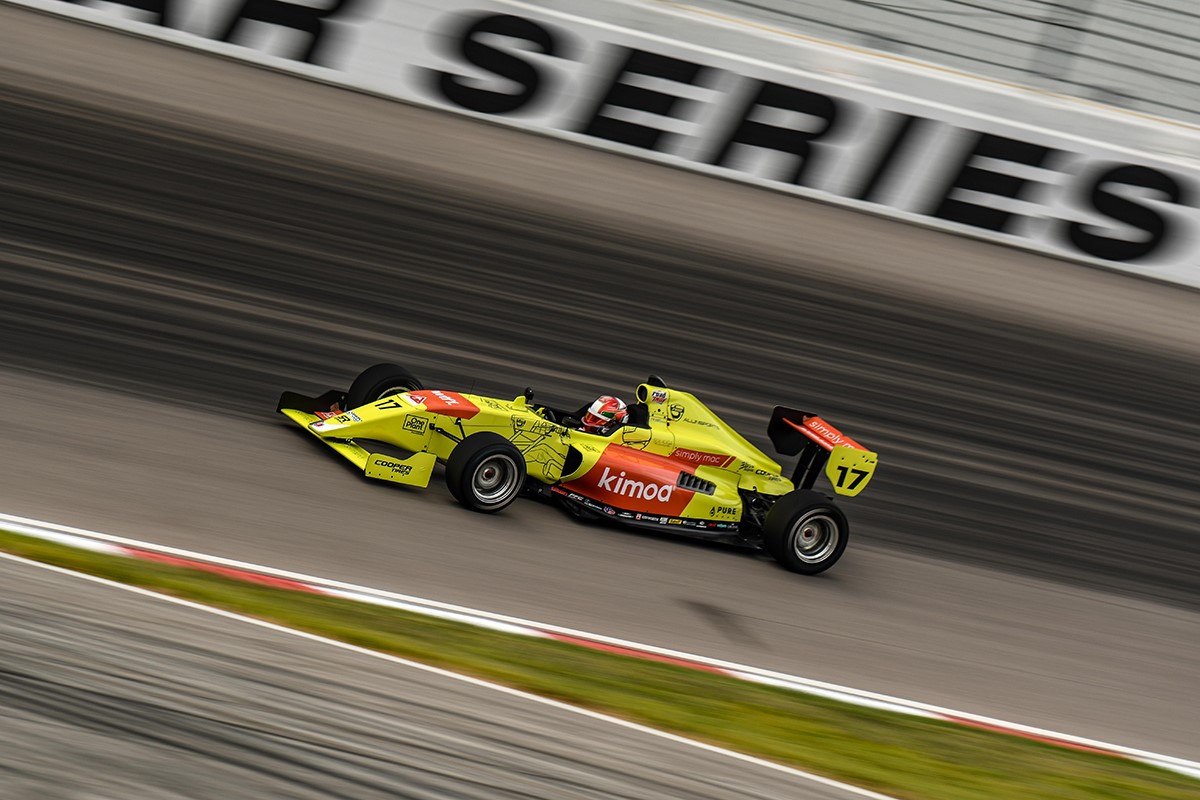 The 20-year-old Italian-Canadian from Toronto, Ont., Canada, had to work hard for his laurels, heading an intense four-car battle throughout the 55-lap race. On the final lap, Braden Eves (Exclusive Autosport), from New Albany, Ohio, squeezed past Russia’s Artem Petrov to secure second position, with Petrov’s Juncos Racing teammate Sting Ray Robb, from Payette, Idaho, also close behind in fourth.

After securing the Cooper Tires Pole Award yesterday, DeFrancesco made an exemplary start under cloudy skies to lead the field into Turn One. Petrov tucked into second place ahead of Singaporean Danial Frost (Turn 3 Motorsport), who managed to sneak past Robb. Mexico’s Manuel Sulaiman (DEForce Racing) also made up a position on the opening lap at the expense of Eves, who had started fifth.

Frost was unable to maintain his early pace, soon slipping back to fifth position as DeFrancesco, Petrov, Robb and Eves settled into a rhythm at the head of the field.

DeFrancesco displayed admirable speed and consistency as he fought to keep his position at the head of a frantic four-car train. The leaders were never separated by more than a few car lengths, and while Eves seemed to have an especially quick car, it took him until Lap 49 to finally find a way past Robb for third.

Next time around the 1.25-mile oval, Eves demonstrated the remarkable durability of the Cooper tires by turning what was to stand as the fastest lap of the race. Last year’s Cooper Tires USF2000 champion quickly latched on Petrov’s tail, and just when it seemed as though the Russian could weather the storm, Eves swept to the high line entering Turns Three and Four on the 55th and final lap, driving clear around the outside of Petrov and then winning the drag race to the finish line by less than a tenth of a second.

Just ahead of them both, DeFrancesco posted his fastest lap on the very last lap to secure a magnificent victory ahead of Eves, Petrov and Robb as the quartet were separated by only 1.2527 seconds.

Frost slipped back to a disappointing fifth at the finish, just ahead of the DEForce pair of Parker Thompson, from Red Deer, Alb., Canada, and Sulaiman.

Another Canadian, Antoine Comeau, also performed well for Turn 3 Motorsport, claimed the Tilton Hard Charger Award as he worked his way calmly from 12th on the grid to eighth in the all-green race.

After finishing on the podium in each of the two most recent races, New Zealander Hunter McElrea (Pabst Racing) could manage no better than 11th, narrowly ahead of last week’s surprise winner, Californian Kody Swanson (Legacy Autosport), who found it rather more difficult to adapt his style to the aero-dependent egg-shaped oval by comparison to the more familiar high-banked layout at Lucas Oil Raceway.

DeFrancesco’s fine performance earned a second PFC Award of the season for Andretti Steinbrenner Autosport. It also enabled him to extend his lead in the Indy Pro 2000 Championship Presented by Cooper Tires to 25 points as he chases a champion’s scholarship worth more than $600,000 to graduate onto the next step of the open-wheel development ladder, Indy Lights Presented by Cooper Tires, in 2021.

Next on the docket for Indy Pro 2000 is a return to road course competition with a triple-header event at the Indianapolis Grand Prix circuit on September 3-4.

Devlin DeFrancesco (#17 WTF1.com-Andretti Steinbrenner Autosport Tatuus PM-18): “I haven’t had a win like this in such a long time and it’s the best feeling in the world! The team has done an unbelievable job. They’ve really gotten me up to speed on the ovals quite quickly – what to look for, what not to look for. I’m really enjoying the ovals. We have had a very strong car all week, from the first test on, and I knew we’d be even stronger in the race. We took a gamble after practice with the downforce level and it really paid off; the car was so easy to drive. It’s great to add to the championship lead but honestly, I’m not thinking about the points. We’re just taking it race by race, and this one was extremely satisfying. It’s a great confidence booster.”

Braden Eves (#1 Road to Indy/Cooper Tires/MDRN Livery/CCFI/Huston Insurance-Exclusive Autosport Tatuus PM-18): “It’s just so unfortunate that qualifying didn’t go well. We didn’t have the car yesterday but as soon as we got on track in practice this morning, I was the quickest guy out there. The Exclusive Autosport guys gave me a great race car, the best car I’ve ever had on an oval – I was able to do everything with it. But Sting Ray drove a very defensive race and it took most of the race to get by him. I honestly think I could have won if the race had been longer, but I’m glad to have made the pass for second. I needed a podium to get back at it, since I’ve had a couple of bad races. Momentum shifts so quickly like that, so I’m ready to get after it.”

Artem Petrov (#42 Road To Success/Bell/226ers-Juncos Racing Tatuus PM-18): “The conditions have changed so much today, so the car was very different than it was this morning – I don’t know why, we didn’t change anything. It’s a shame that I couldn’t keep Braden behind me. I just missed Turn One and he overtook me. But I’m happy with our race pace and with the result, so we’ll just keep looking forward and keep pushing hard.”