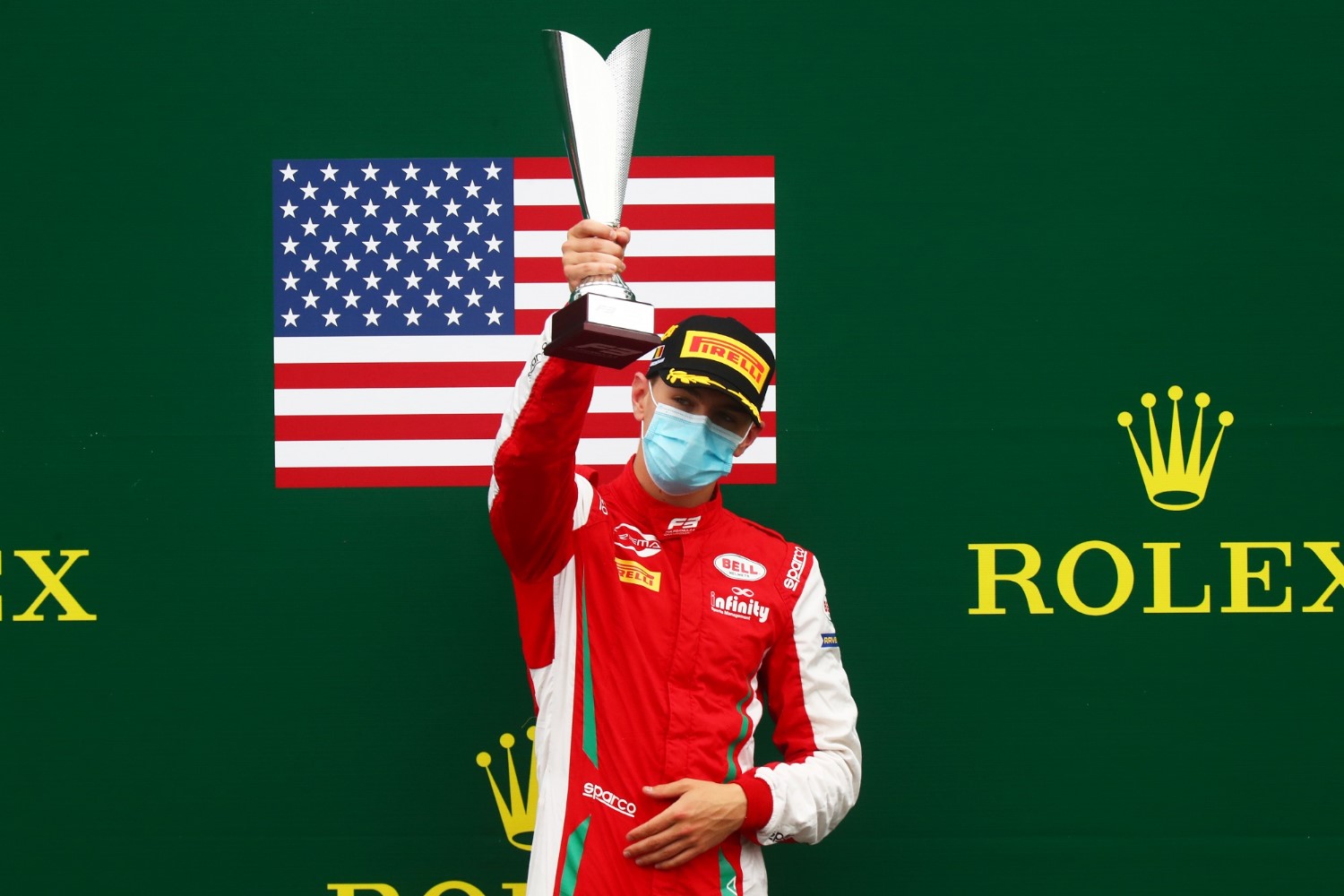 Logan Sargeant reclaimed the Championship lead in emphatic fashion, taking his second win of the season in a PREMA one-two in the FIA Formula 3 Race 2 at Spa-Francorchamps. The American brushed off a late challenge from teammate Frederik Vesti to finish 0.8s ahead at the checkered flag.

Sargeant lost first place in the standings to fellow PREMA racer Oscar Piastri in Race 1 on Saturday, but battled back in resounding style by rising from third place in the early stages and managing out a convincing victory.

Title rival Liam Lawson recovered from a difficult start to nab the final podium place, but was never really in a position to challenge the top two, finishing nearly 8s behind.

Piastri worked hard but could only manage sixth place after a 5s time penalty for leaving the track and gaining an advantage curtailed his attempts to get further forward.

The cars lined up on a cold and foggy morning in Spa, but Richard Verschoor was hot off the line, pulling away smoothly when the lights went out. Lawson looked to be feeling the chill – he was sluggish at the start and had fallen to fifth by the first turn.

Sargeant gladly collected second from the Hitech Grand Prix racer and set about challenging Verschoor for the lead. The PREMA man ensured he got through the first corner cleanly, and then lined up the Dutchman at the second. Darting down the left-hand side of him, Sargeant ran out of road and was forced on a trip through the run-off. He returned to the tarmac ahead of Verschoor but handed back the place as it was gained off-track.

The American only needed one more lap to finish the job, lunging ahead of the MP Motorsport man down the main straight and clinching the position at La Source. His teammate was making moves too. Vesti picked off Lawson first, before flinging his PREMA down the side of Olli Caldwell for a place on the podium. A couple of laps later and he had Verschoor in his pocket as well, firing past the reverse polesitter for second place behind Sargeant.

The field were given a breather as Pierre-Louis Chovet dumped his Hitech into the barriers and brought out a Virtual Safety Car. The Frenchman was quickly out of the car, and out of the race.

Caldwell couldn’t sustain his early pace when racing resumed and began to plummet down the order, falling all the way to ninth behind teammate David Beckman. It was a similar story for Verschoor, whose time in first place had become a distant memory. The MP man dropped to sixth as a DRS train of Théo Pourchaire, Lawson and Alex Smolyar all dived ahead.

Pourchaire was so busy battling for second, that he was caught off guard by Lawson behind him. The Hitech driver had quickly caught up and put his DRS to use with a gentle dive down the side of him.

The ART Grand Prix driver then immediately fell into the clutches of teammate Smolyar, dropping from third to fifth in a matter of corners. It didn’t get any better for him in the final laps, as Piastri flung around the side of him two laps later.

Having looked so measured out in front since passing Verschoor, Sargeant was under pressure for the first time on Sunday as Vesti began to reel him in. The American was trying to manage the gap, but couldn’t keep him out of DRS range. PREMA certainly weren’t about to hold them back, as Vesti’s engineer told him on the radio, “you can do this, come on!”

In the end, Vesti couldn’t make it work, and was forced to settle for second at the checkered flag behind Sargeant. Nearly 8s back, Lawson claimed the final podium place ahead of Smolyar. Piastri’s 5s time penalty, for leaving the track and gaining an advantage during his earlier overtake of Verschoor, dropped him to sixth behind Pourchaire. Verschoor managed seventh, ahead of Lirim Zendeli, Beckmann and Sebastián Fernández.

Sargeant now leads teammate Piastri by seven points in the Drivers’ Championship, with 152 overall. The Australian is second ahead of Beckmann on 111 points, just 0.5 ahead of Lawson. Pourchaire sits in fifth place. In the Teams’ Championship, PREMA remain first with 387.5 points, ahead of Trident on 199.5 and ART Grand Prix on 172. Hitech are fourth ahead of MP Motorsport.

“Fortunately, we were able to get the win today, which was super important after the technical problems that we had yesterday. It was a tough race as I had Fred pushing really hard behind me, but we were able to withstand the pressure and take our second win of the season.”