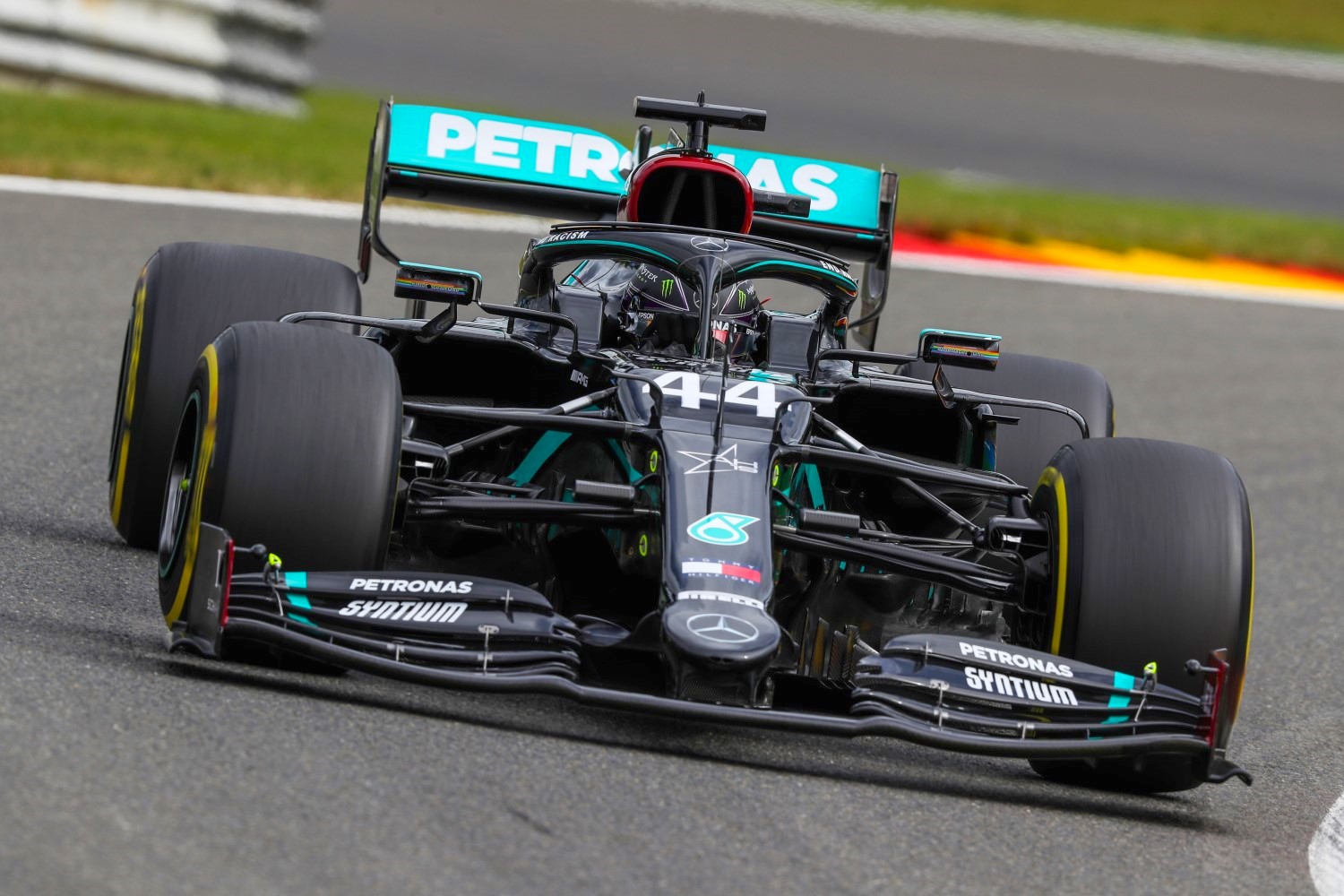 There really is no competition in F1. It has been that way for six consecutive years. The Mercedes car is so superior no one else has a chance to win a race. Lewis Hamilton (above) led every lap to win the Belgian GP at Spa Sunday for the 4th time. He did it on cruise control as his teammate Valtteri Bottas had nothing for him.

Hamilton fended off Bottas’ attack at the start and crucially maintained his lead on the long run to Les Combes, before pulling clear of the field, eventually heading his teammate home by over eight seconds.

“I just couldn’t catch him on the straights,” said Bottas. “With the same car and Lewis driving pretty much mistake-free… I think Lewis was faultless today and yesterday.”

“I’m 35, nearly 36 but I feel better than ever,” said Hamilton, as he continues to demoralize his teammate. Bottas is a defeated man.

“It wasn’t the easiest of races, I had a lock up into Turn 5, the tire temperatures were slowly dropping. It was a bit of a struggle, I was a bit nervous that we might have a scenario like Silverstone,” said Hamilton trying to make it look like he had it hard.

A distant third was the Red Bull Honda of Max Verstappen – the same place he started in a race that was a parade at the front.

“It was pretty boring, not much to do,” said Verstappen. “I couldn’t keep up with them, and then I ran out of tires at the end. I think I was very close to a puncture, not more was possible today.”

4th, where he started, was Daniel Ricciardo in the #3 Renault 25 seconds behind Hamilton while Esteban Ocon’s Renault passed Alex Albon’s Red Bull Honda on the last lap for 5th ahead of Lando Norris in 6th.

It was the 89th F1 win for Hamilton who will pass Michael Schumacher’s record 91 wins this year with ease as Schumacher lays at home in a vegetative state, unable to challenge for years.

The hapless Ferraris of Sebastian Vettel and Charles Leclerc finished 13th and 14th respectively, over 72 seconds behind. Embarrassing.

The race had one Safety Car period caused by a huge crash involving Antonio Giovinazzi and George Russell on Lap 9.

For the second year in a row, Giovinazzi lost control of his Alfa Romeo on his own exiting the Fagnes chicane and hit the barriers, shredding debris – including a loose wheel – across the track and into the path of the oncoming Russell.

Russell hit Giovinazzi’s errant wheel which him into the barriers and out of the race. Both drivers emerged from the incident unscathed.

During the yellow flag period the majority of the field pitted for Hard tires, as Mercedes double-stacked its drivers in order to maintain position over Verstappen.

The race was effectively over.

Carlos Sainz Jr. was been ruled out of the Belgian Grand Prix before it has even begun after suffering an exhaust failure on his McLaren Formula 1 car.

Sainz Jr. encountered the problem on his out lap on his way to the grid but reported to McLaren over team radio that “there’s smoke coming out of the car”.

Lewis Hamilton
Spa is such a special circuit, I could just drive around here for lap after lap. It’s not always been an easy one for me, so to come here and get pole and the win this weekend is fantastic. The first lap can be a nightmare, because of the huge tow down the big straight, but I managed to keep Valtteri behind me on lap one and from there I had a strong race. Of course, I’d love to be able to win every race wheel to wheel, but today was a different kind of race, it was all about managing the tires and the gap to the cars behind. I was slightly nervous at the end that we might see a repeat of the tire issue we had in Silverstone, but thankfully it held in there. Huge credit to the team, both here and back home in Brackley and Brixworth. No matter how much success we’ve had over the years, everyone just keeps their heads down and focuses on trying to improve. It’s an incredible mentality to have and it’s inspiring to be working in that kind of environment.

Valtteri Bottas
The race was pretty straight-forward today; I was hoping to really get some good opportunities today in the first lap and at the Safety Car restart, but I couldn’t use the tow going up to Turn 5 enough today. I was actually really close to Lewis out of the first corner, but the tow effect was much smaller today than it was in previous years. I’m not quite sure why, maybe that’s because we had a tail wind going into Turn 5. I don’t think there was really any other opportunity to catch Lewis; he was on pole, drove a good race and deserved the win today. Towards the end of the race, we had to really manage the tires quite a bit; I was starting to get the same kind of vibration that I felt before the end of the race in Silverstone when I suffered the puncture. I had to reduce the pace quite a bit to save the tires, but it worked out and I’m happy that this time I didn’t lose the points. I was just told that this was my 51st podium – the same number of podiums that Mika Häkkinen scored in his career. He was my idol growing up, so it’s great to equal him in that way, although he is obviously mostly known for his two titles.

Toto Wolff
That was a great race. We had not won in Spa since 2017, so to come back with such a strong performance and very good pace on a track that troubled us before makes me really happy. The race was relatively straight-forward after the start, but it ended up getting very tricky towards the end, because the tires were almost at the end of their life. We could see the same on Verstappen’s car and at that point it was really about bringing our cars home safely. So we told our drivers to stay off the curbs and lose quite a bit of pace. It gave us a bit of a headache because the memory of the punctures in Silverstone was still fresh and that’s obviously what we wanted to avoid at all cost. So for us, the race wasn’t over until both cars had really crossed the line – but luckily they did and secured this great one-two. We’re really looking forward to go to Monza next week and then to Mugello – the races keep coming thick and fast and it just doesn’t stop.

Andrew Shovlin
Another great result for the team. The safety car was a bit earlier than we’d have wanted, which made it difficult to get the hard tire through those last few laps. In the early part of the second stint we thought it was close between a one and a two-stop, but seeing the degradation on the hard, we realized that Verstappen on the two-stop would be a significant threat around lap 25 when he was close behind Valtteri. That caused us to get both drivers to drop the tire management and put some quick laps in. They were both able to build gaps that meant we could cover if Red Bull did stop but the fast laps did take a bit out of the tires, and they were really dropping off in the last few laps. Overall though, it’s been a good weekend for the team. The car hasn’t had the same pace we’ve enjoyed at other tracks this year, particularly in qualifying, but the team has done a good job to get the most out of it and we’ve operated well throughout the weekend. We’re looking forward to Monza, but we need to find a lower drag set-up as we’re behind Red Bull on the straights already and the latest technical directive from the FIA on engine modes is going to cost us time in qualifying. But the team will be working hard in Brackley and Brixworth over the next few days to try and stay ahead.