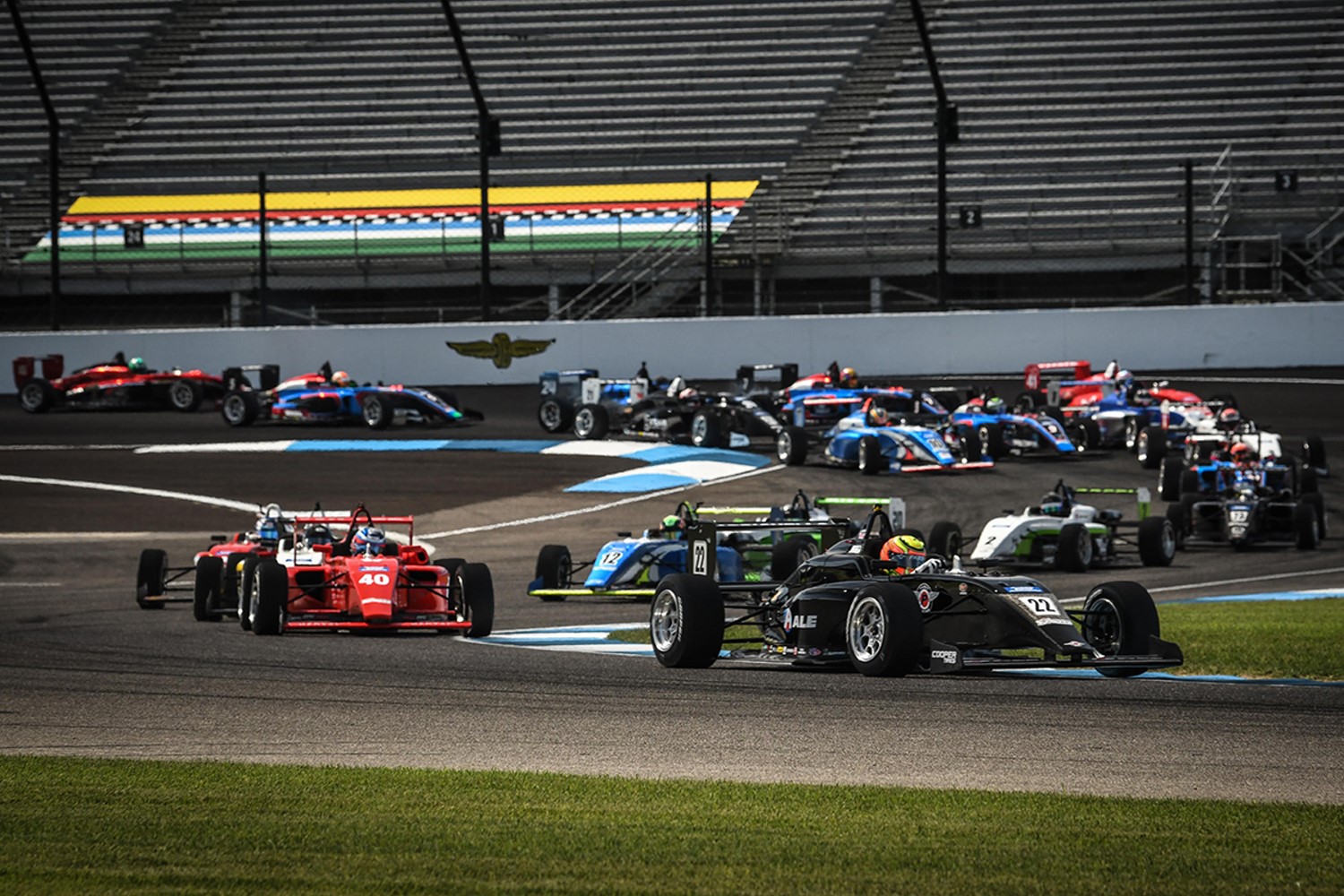 One day after celebrating his 16th birthday, Reece Gold, from Miami, Fla., moved up to second in the points table following his fifth podium finish in succession for Cape Motorsports, while pole-winning Brazilian Kiko Porto had to settle for third for DEForce Racing.

After dominating the first six races of the season for the Jay Howard Driver Development team, Denmark’s Christian Rasmussen qualified a relatively disappointing fifth and could manage no better than sixth at the finish after being shuffled all the way down to 13th place on the opening lap.

This morning’s opening practice session was portent of things to come as no fewer than 17 drivers were blanketed by less than one second. It was Porto, from Recife, Brazil, who led the way, and the former F4 race winner continued his good work in qualifying to claim his first Cooper Tires Pole Award by just under a tenth of a second from Gold.

Barrichello, from Sao Paulo, Brazil, lined up third on the grid but was quickly ousted by Carmel, Ind., teenager Jack William Miller, who continued his strong form for the Miller Vinatieri Motorsports team by leaping from fourth on the grid to second on the opening lap.

The Cooper Tires USF2000 Indy Grand Prix wrapped up today with another exciting pair of all-green races to comprise Rounds Seven, Eight and Nine of the Cooper Tires USF2000 Championship. Brazilian Eduardo Barrichello continued his excellent form from yesterday by winning again this morning for Pabst Racing, while Floridian teenager Reece Gold earned his own breakthrough maiden victory this afternoon for Cape Motorsports. Gold’s triumph came as the result of a heartbreaking late error by Jack William Miller (Miller Vinatieri Motorsports), from Carmel, Ind., who slid off the road in Turn One while holding a tenuous lead.

A busy morning for the USF2000 contenders began with a qualifying session bright and early at 8:00 a.m. For the second day running it was Porto who set the pace, taking advantage of the cool, crisp conditions to circulate within a couple of tenths of a second of Braden Eves’ track record. Porto thereby secured his second Cooper Tires Pole Award, edging fellow Brazilian and close friend Barrichello by just 0.0390 of a second.

Barrichello, however, turned the tables by gaining a better run away from the start and taking the lead at Turn One. Miller also made a good early move, driving around the outside of Porto in Turn Seven to take over second place.

The unfortunate Porto found himself shuffled all the way back to sixth place by the end of the opening lap behind points leader Christian Rasmussen (Jay Howard Driver Development), Brooks, up from sixth on the grid, and Gold.

Barrichello turned a string of rapid laps – including the fastest of the race which earned him the pole position for the final event of the triple-header weekend – to extend the gap to Miller to over 1.7 seconds by the halfway point of the 15-lap race. The Brazilian then managed his pace perfectly, and even though Miller closed to within just over a half-second by the checkered flag, Barrichello’s second successive victory never looked in doubt.

Brooks claimed his best result of the season thus far following a race-long scrap with Rasmussen and, later, Porto, who repassed Gold on the fifth lap and moved up to fourth on Lap 13 following a textbook pass on Rasmussen at Turn 12.

A little further down the order, Christian Bogle (Jay Howard Driver Development), from Covington, La., claimed the Tilton Hard Charger Award after making his way from 20th on the grid to 15th.

The final race of the week saw Barrichello once again take off confidently into the lead. Behind, second-place starter Rasmussen was inadvertently hit from behind by d’Orlando, who had lined up directly behind him on row two. As those two plummeted down the order, Barrichello led from Miller, with Gold slotting into third ahead of Brooks.

With two laps in the books, Miller gained the advantage of the draft to close right up onto Barrichello’s tail as they headed toward Turn One. Barrichello instinctively defended the inside line in the braking area, whereupon Miller executed arguably the overtake of the weekend as he drove all the way around the outside to claim the lead for the very first time.

A little later on the same lap, in Turn Seven, Gold also made a move on Barrichello, dropping him to third, just ahead of Brooks.

Miller drove superbly until the very last lap when, with Gold closing, the leader left his braking a fraction too late at Turn One and slid straight on into the escape road. Gold needed no second bidding, slipping through into the lead and then completing one final lap of the 2.439-mile Indianapolis Grand Prix circuit to secure an emotional victory.

Brooks capped his excellent weekend by inheriting second place, and although Miller crossed the finish line in third, he was relegated to fourth behind Porto by the stewards for an unsafe return to the race track in Turn Two following his excursion through the gravel trap.

Barrichello slipped back to a distant fifth at the conclusion, narrowly ahead of Cape Motorsports’ Josh Green, from Mount Kisco, N.Y., who posted a fine drive from 14th on the grid to earn the Tilton Hard Charger Award.

Australian Cameron Shields capped his first race week with DEForce Racing by claiming seventh ahead of Miller’s teammate, Max Kaeser, from Keystone, Colo., who also enjoyed a strong week with a trio of top-10 finishes.

Augie Pabst III and the Cape brothers, Dominic and Nicholas, each took home a PFC Award as the winning car owners.

Subject to final confirmation, the USF2000 contenders are expecting to be back in action next weekend for another triple-header event at the Mid-Ohio Sports Car Course in Lexington, Ohio in conjunction with the NTT INDYCAR SERIES – an event which was postponed from earlier in the year due to the COVID-19 pandemic.

Eduardo Barrichello (#22 Ale-Pabst Racing Tatuus USF-17): “I’m really happy about this week, it was almost perfect – two wins out of three races and top-five in the third race. The Pabst crew did an amazing job with the car, and thanks to my dad and Tony Kanaan for supporting me. I appreciate the opportunity to be here. We’re closer in the championship but I’m here to win races, and if we keep doing that, we’ll keep getting closer.

“But I feel as though there’s a connection between me and the track. I really love this track, so when Rasmussen started winning all those races, I thought this might be my last hope. My dad won here in F1 and raced here in INDYCAR and it suits me, though I don’t know why – but we’ve done pretty well here.”

Reece Gold (#3 The Ticket Clinic-Cape Motorsports Tatuus USF-17): “This is awesome. It feels so good to get the win after so many seconds and thirds! I was happy to make it through the first lap: this is the kind of track where you have to gain spots and get away from the mess, because with the draft, things happen. Thankfully, we got a great start and just focused forward. Halfway through the race, I didn’t think we could get there, but something happened mid-race and we started to reel Jack in. From there, I was able to take advantage of the chance to grab the lead. I’m really happy to finally get the win.”

Jack William Miller (#40 Indy Dental Group LLC/Lumist-Miller-Vinatieri Motorsports Tatuus USF-17): “It means a lot to be on the podium here, but it’s a bit of salt on the wound not to get the win, given how strong we were today and yesterday.”

Christian Brooks (#44 Hot Wheels/Chaco Flato/Bell Helmets-Exclusive Autosport Tatuus USF-17): “I got hit from behind on the start of the first race and that put me back, so I knew I had to go immediately. I worked my way back up on the first few laps, getting Rasmussen on the outside going into Turn One. That was definitely a confidence booster! In the second race, I was chasing down Gold and Miller until that late incident. We started P7 and to get up to second, we’re steadily getting there. We have a race car that can contend up front, so first and foremost, thanks to Exclusive Autosport – the progress we’ve made over the past weeks and even over the past day, they’ve been working so hard to give me the best car they could. We’ve been searching for this first podium for a few races so now we’re shooting for the top step.

“And of course, I’m thinking about (Indy Pro 2000 driver) Braden Eves. He’s a teammate and a good friend and to see what happened to him yesterday, I’m glad he’ll be okay. That really hurt but I know he’d be proud of me and I’m glad to put this trophy in the truck for him.”

Kiko Porto (#12 Banco Daycoval/Petromega-DEForce Racing Tatuus USF-17): “Rasmussen had a problem at the start and I had to really get on the brakes to avoid him, so I lost time. I was able to make a few passes, but Christian (Brooks) and Reece were quicker than me on new tires. On the last lap, I was able to get third position. I’m very happy with the weekend, to get two third-place finishes and two poles, so thank you to the team. It was great to share this with Dudu, he’s more than a friend – he’s a brother. I’m so happy for him, it’s a big part of my weekend. Hopefully more podiums together.”