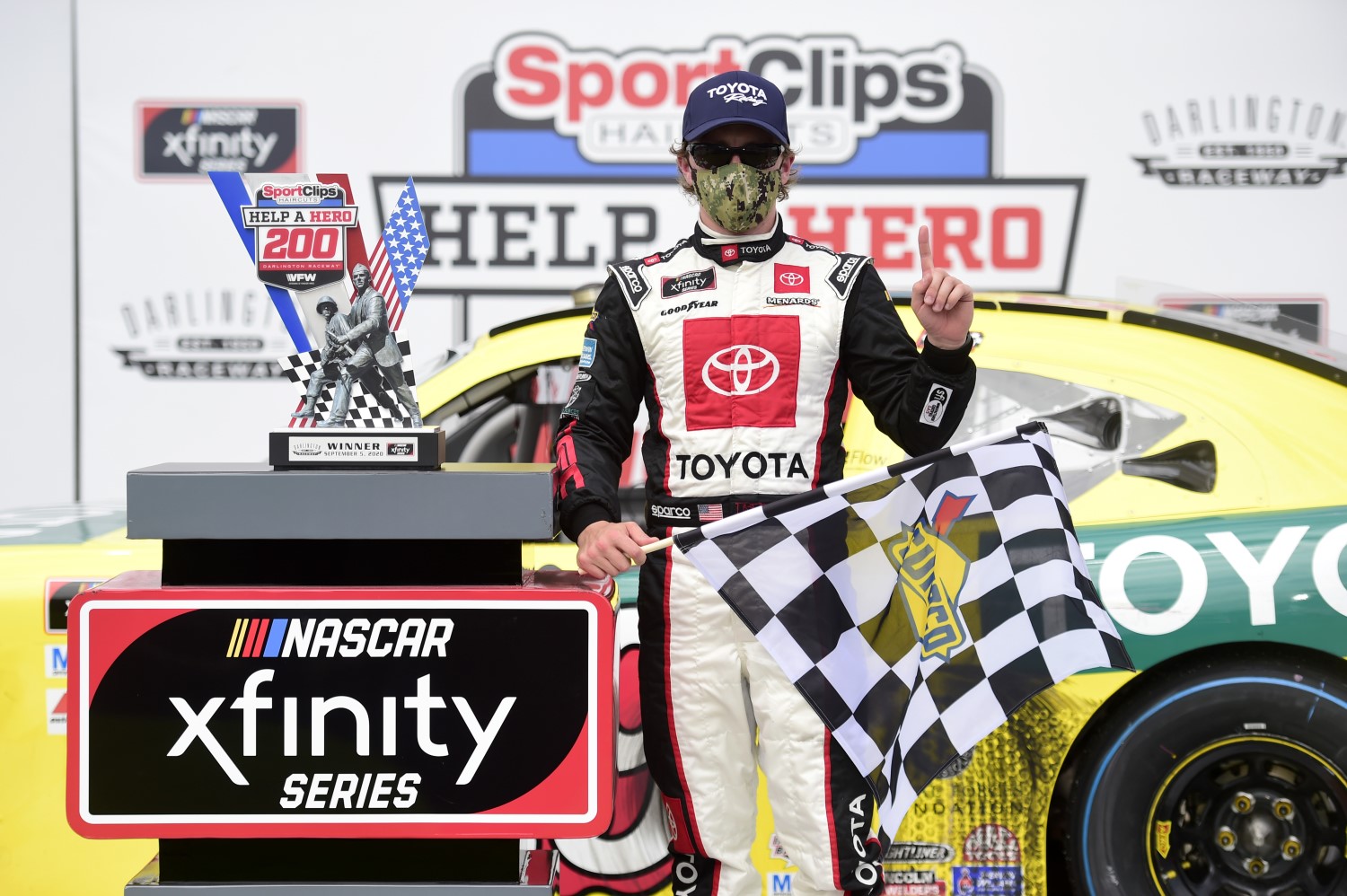 It was a fitting race finish for a track known as being “Too Tough To Tame.” The two front-running cars tangled with two laps remaining and Brandon Jones dove low to take the lead and the victory in Saturday’s Sport Clips Haircuts VFW 200 Xfinity Series race at Darlington Raceway.

An intense, exciting and suspenseful battle for the lead in the final 10 laps between Xfinity Series regular Ross Chastain and this year’s Daytona 500 winner Denny Hamlin gave NASCAR fans all they could ask for, but ultimately, contact between the two in Turn 3 with two laps remaining allowed then-third place Jones, 23, of Atlanta, to get around the pair and capture his third checkered flag of the season.

“This is a tough place to get around and man, just smart in the head I think today, I think that’s what got ’em,” said Jones, driver of the No. 19 Joe Gibbs Racing Toyota. “I saw they were really racing hard and I knew I was catching them and we knew he (Hamlin) was gonna pull that big slider.

“That’s what you gotta do sometimes to get yourself in position.”

Hamlin, who started last in the 37-car field, won both stages and essentially put on a Darlington driving clinic all afternoon, rebounding from a weak starting position, a slow pit stop, whatever was thrown at him.

“He was running his line, I was running my line and I thought we had a great race going there,” Hamlin said. “I saw an opportunity to clear and once I did I just carried a little too much speed up into (Turn) 3 and obviously he got in back of us and allowed the 19 (Jones) to catch up to both of us.

What was your view of those final few laps?

“I mean, look at the right side of this thing. I think everybody’s looks like this and that is what is so much fun about this track. This is a tough place to get around. You saw them really racing hard, and I knew I was catching them. We knew we was going to pull that big slider and that’s what you have to do sometimes to clear them . All-in-all, we had the Robert Huffman paint scheme. This is so big for Toyota. Myself, oh my gosh, this place is huge on so many levels on Southern 500 weekend. We will take it. Three wins this year. We will keep going. I think more to come.”

At what point did you know that you had a shot at this?

“I’ve been in this position actually a few times. I did it at Kansas when I won, and that’s what came to mind. I knew I need to back the entry up whenever they were racing really hard, and that was my only option to try to get a better exit than them.”

Another win for you. Is this a career year for you and a team that can compete for the championship?

“This is, man. You see us, I think, every single weekend. We have some bad races, but we rally back, and we don’t give up and get back in victory lane, where we need to be.”

Can you walk us through those final few laps?

“First off, this was an amazing experience for me. This is a really big race for us drivers with Throwback Weekend with Robert Huffman’s Toyota scheme. I know that scheme has won a bunch of races, so I’m happy to add to that. It’s really big for the whole group. What a fun day for sure. This was crazy. I never thought that we would be beating Denny Hamlin at Darlington. We just executed this race really well, I felt like. I think that’s what kind of paid off for us.”

Do you feel like you are capitalizing on opportunities more this season with your experience?

“It is probably so. It’s a little bit of experience. I think it’s a little bit of learning how to study the races some and how to really take notes. I know it sounds kind of easy and self-explanatory, but I feel like we’ve done a really good job this year of building a good notebook. We came here earlier this year after the lockdown. We didn’t really have a great race, but we had speed at the end of the day, it just never showed, because we had loose wheels and everything there. We had the speed, so we kind of went back and watched a bunch of film. We have SMT now. We know exactly where we are getting beat, and where we were doing good. So, I think we just put everything together and made a full race out of it. That’s what we’ve been doing at every single race track. I think that’s maybe why you have seen a little more consistency out of us.”

Do you feel like you are the best prepared you have ever been going into competing for a NASCAR championship?

“I think so. I have some really good tracks coming up too. This was not one circled, but this is one I’ve wanted to win at forever, so that just says a bunch. We’ve been really strong at these low grip race tracks. Auto Club was one of them. We should have won that race. We had an incident there, and now this one. So, that’s been really, really eye opening to see. These are not my strong tracks, and we are winning at them. When we get to the good stuff, we are going to be ready to turn the heat up.”

What has been the biggest change from last year to this year with this race team?

“I think that the consistency is really big. I haven’t really had a consistent crew chief kind of my whole career. I haven’t had the same group of guys, everything there. I think that’s what you are seeing now is just the confidence we have in each other. There was never one-time last year where we questioned each other, but it just takes a while to learn my language for a race car and everything there. That’s been really, really good to have that consistency in that team. It makes us a lot stronger.”

What were you seeing in those last few laps? Were you surprised it happened?

“No, I knew that was probably going to come. I planned for it when I got there. It kind of scared me for a little bit up on the roof. My spotter, Stevie Reeves, wasn’t really giving lap times at a certain area of the race, and he had been doing it for a while. Typically, when he stops doing it means that we aren’t catching that car anymore. I think, come to find out, we were actually about a tenth of a second better than those two or more, and he didn’t want to mess up my momentum. I was continuing to search and get as much momentum as I could. When I got within that distance, I knew the only way for Denny (Hamlin) to make the pass was to pull that big slider. I had done it a few times today, and it really takes a bunch out of the race car whenever you do that, so I saw Ross (Chastain) check up a little bit to prepare for that, but I think you have to slow down so much to make sure that your car is going to turn by the time that you get to the center and you can cut underneath them. That’s kind of what we did there.”

Can you talk about the emotions of going from finishing third to getting the win?

“When I made the pass, I looked in the mirror and I could not see anyone anymore. I knew at that point. I never say anything until it’s over, because I’ve been a part of a lot of things happening to us that has taken some wins from us. I knew that if nothing happened that we were going to be just fine and win the race. Each corner turns one and three, I backed up a bunch. There was just no reason to push the issue and continue to gap anybody. So, that was big. I have won a lot of really run races this year. This is up there with one of the best so far.”

What tracks do you have circled on your calendar?

“Well, I’m thinking ahead. Obviously, we have made the first round. When we get to that, the first one. I think we have Vegas in there, which is a really good mile-and-a-half for us. I think we can really do a good job there. Easily, win that race and lock us in to the next round, but Talladega is always up in the air. You never know. We’ve been really good at plate tracks. We tried something new at Daytona this year, working with our teammates a little bit differently, and I think we have a really good trial there to help us out for Talladega. We ran second at the Daytona Road Course, and we have Charlotte ROVAL, so there are a bunch of tracks that we’ve run well. If we can get to that final round, we really have some good ones. Phoenix, we won at. We beat Kyle (Busch) at. We’ve done really good at Kansas in the past. We’ve won the last two. We get to that end. We’ve got some tracks that we’re going to be really good at/”

How has the change in practice changed the dynamic in the field?

“It’s scary to be honest. I think too hard at times in these races, in my opinion. I’m really methodical about the situation that I’m in. We’ve got some cars that I know how they race. You don’t know what’s going to happen when you get to turn one. We haven’t been practicing. We haven’t been on the race tracks. I think these teams do a phenomenal job at getting these cars ready for the race. We’ve got really close balances. I never have once this year after the pandemic and after everything went down, I’ve never gone into turn one as hard as I can possibly go. I let that play out for a couple of laps. It’s lost me some spots early on, but I think it’s paid off in the long run in these races.”

Has Joe Gibbs Racing approached you about being a back-up driver if one of their four Cup drivers tested positive for COVID?

“They have. Obviously, we hope that never happens, but if it’s a possibility to get in a Cup car, that would be something interesting to see how that goes down and a big learning experience.”

Notes: Post-race inspection in the NASCAR Xfinity Series garage revealed no issues. NASCAR will bring the Nos. 9, 18, 19 and 98 cars back to the R&D Center this week.