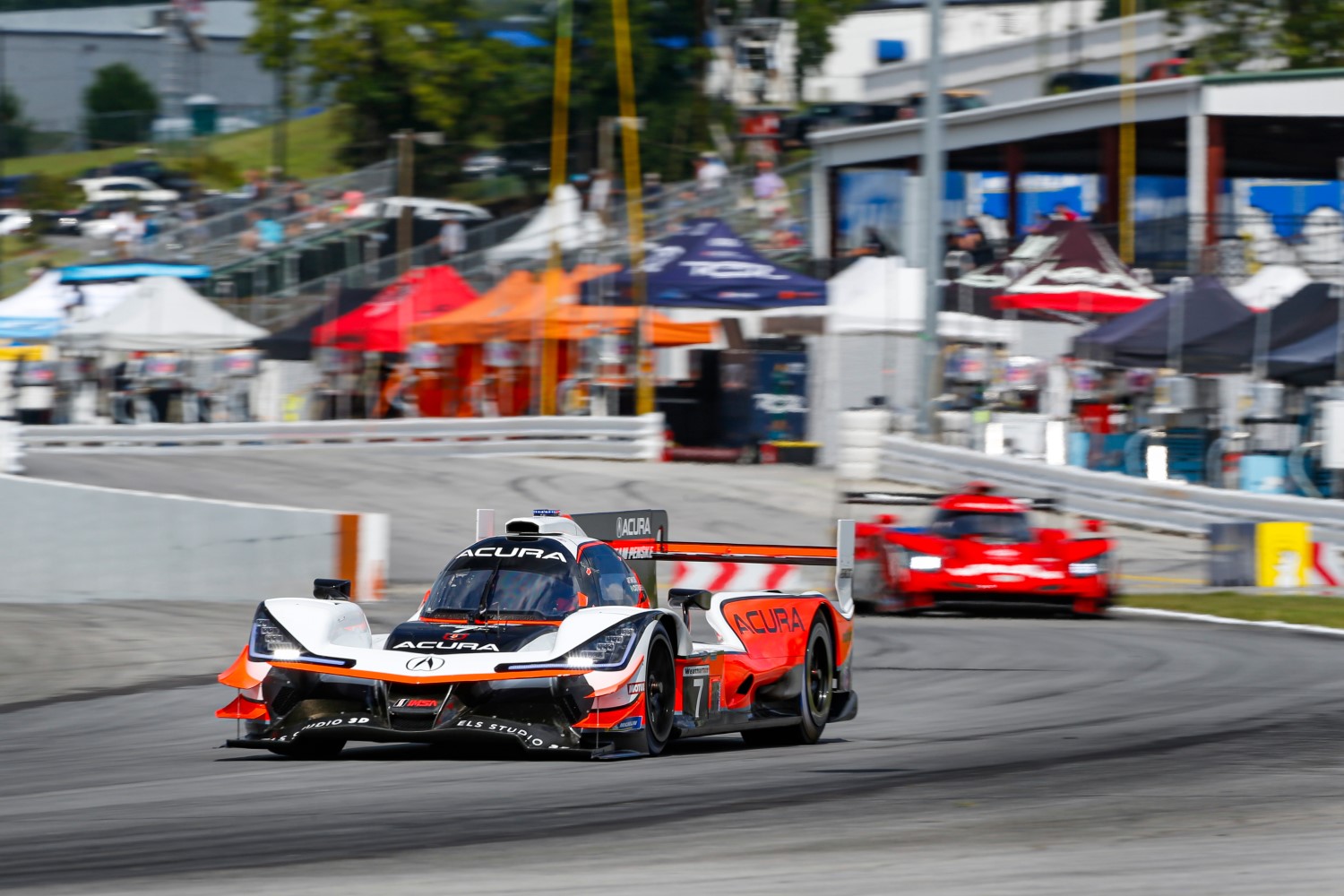 Helio Castroneves and Ricky Taylor needed a miracle Saturday at Michelin Raceway Road Atlanta. Somehow, they got more than one.

After falling more than a lap behind following two penalties early in the race, Taylor and Castroneves rallied to win the TireRack.com Grand Prix, the second consecutive win in the IMSA WeatherTech SportsCar Championship for the No. 7 Acura Team Penske Acura DPi ARX-05.

They key to success, as strange it may seem, was falling behind. At one point, the car was just 30 seconds away from being lapped a second time on the 12-turn, 2.45-mile circuit.

“What that did was put us in a situation where we just pushed the whole race,” Taylor said. “We were pushing probably harder than anybody else on the track, so all these little issues popped up. Throughout the race, we were developing a lot and chasing with all of our tools and a lot of communication.

“By the time we got our lap back, the guys in the pits and engineers and me and Helio and everybody had adapted and made changes to chase all the issues that had popped up due to our really high pace. I think that was actually a big tool to getting us in the window and giving us a great car at the end. If we had been in the pack all day, we would have been managing and controlling the race and maybe those issues wouldn’t have popped up that gave us such a fast car at the end.”

During his first pit stop, Castroneves exceeded the speed limit on pit entry, then went through a red light on pit exit. That brought about a drive-through penalty followed by a 60-second stop and hold penalty, which dropped him more than a lap behind the field.

“I made a mistake coming to the pits,” said Castroneves. “When I saw it, I was like, ‘Ugh, I got caught.’ I made two mistakes in one pit stop. It was totally my bad. They say I drive like I’m 20 years old. Now I make mistakes like a 20-year-old.”

Discouraged but not defeated, Castroneves, Taylor and the team methodically fought back, using the race’s six hours to their advantage to adjust the car and steadily get closer to the lead.

“Once we were back there, it was like, ‘OK, there’s no pressure,’” Taylor said. “Let’s just push as hard as we can and do everything we can do to try to put ourselves back in it. When it came time, everything was in line. Everybody executed.”

With an hour and five seconds left, Taylor had the car back in the lead after Ryan Briscoe pitted the No. 10 Konica Minolta / Wayne Taylor Racing Cadillac DPi V.R while leading.

After a driver change, Castroneves regained the lead before a collision between Toni Vilander and Juan Pablo Montoya forced a full-course caution with 13 minutes left. The debris was removed just in time for a two-lap sprint to the finish.

When the green flag waved, Castroneves jumped ahead of Harry Tincknell’s No. 55 Mazda Motorsports Mazda DPi and reached the checkered flag 0.983 seconds ahead. Felipe Nasr, Pipo Derani and Filipe Albuquerque were third in the No. 31 Whelen Engineering Cadillac DPi V.R.

“I knew exactly what I needed to do to push it,” Castroneves said of the final two laps. “Trust me, if the 55 was going to go into a battle, it was going to be a big one, because there was no way I was giving that win up.”

The win was the 22nd in IMSA competition for Taylor, while Castroneves recorded his fourth victory and second in a row following his winning finish in the rain Aug. 2 at Road America.

“It was unfortunate the other car crashed out in the first lap,” Huffaker said. “It was about managing traffic and keeping our nose clean. For my first race, I’m really happy to start out with a win. … (I was) a bit more anxious than nervous. When I saw the car pull up for the first stop, I was a bit nervous about that, trying to get a good pit stop. But once I got into the car, I felt a lot more comfortable.”

Big Second Half Propels No. 25 BMW to GTLM Win

When it was go time, the No. 25 BMW went. And it wasn’t derailed on the way to the GT Le Mans (GTLM) class victory in the TireRack.com Grand Prix at Michelin Raceway Road Atlanta.

Connor De Phillippi, who shared the No. 25 BMW Team RLL BMW M8 GTE with Bruno Spengler, didn’t take the class lead until past halfway in Saturday’s six-hour race, the second of four races in the IMSA Michelin Endurance Cup.

De Phillippi grabbed first place for good with decisive passes of the No. 911 Porsche and No. 4 Corvette after the final round of pit stops with 52 minutes left. The 27-year-old American held steady from there, including a two-lap trophy dash following a final restart, to put the No. 25 in victory lane for the first time since the 2019 Rolex 24 At Daytona.

“It really came down to perfect execution,” De Phillippi said. “We had a fast car; the car was hooked up, the setup was really good. I think we didn’t have the fastest car early on but as the track rubbered in, we were able to have more pace throughout the stint. … At VIR (two weeks ago), we got P2 and I told (Spengler), ‘Man, we’re on the brink of a win,’ and we pulled it off today.”

Starting fifth in class, De Phillippi and Spengler were content running in the shadows of early race leaders Nick Tandy and Fred Makowiecki in the No. 911 Porsche GT Team Porsche 911 RSR-19. The No. 25, in fact, didn’t lead on the 2.54-mile, 12-turn road circuit until the No. 911 made a pit stop three hours into the event. Even then, the BMW was out front a mere six minutes until making its own stop.

From there, Spengler kept the No. 911 in his sights until turning the No. 25 over to De Phillippi on the final stop with 55 minutes to go. When the Porsche and Corvette completed their stops soon after, De Phillippi muscled his way into first place.

“When they came out ahead of me, I knew I had to attack and I knew I had an advantage (of warm tires) at that point,” De Phillippi said. “So, I just went for it. I went for the kill and got by the Porsche. I was shocked to see the Corvette come out so far ahead of us … but once I managed to get around him on the outside of Turn 4 when he was on cold tires on his out lap, I tried to put the hammer down for those couple laps.”

De Phillippi stretched the lead to as much as four seconds over Tommy Milner in the No. 4 Corvette Racing C8.R before a collision involving the No. 5 Cadillac, No. 6 Acura and No. 63 Ferrari brought out a full-course caution with 12 minutes left on the clock.

When the green flag waved for a two-lap finish, De Phillippi wasted no time putting slower GT Daytona cars between himself and the Corvette as a buffer and pulled away to win by 4.383 seconds. Jesse Krohn and John Edwards gave BMW Team RLL a pair of podium finishers by driving to third place in the No. 24 BMW.

Spengler, who won the IMSA iRacing Pro Series championship while the WeatherTech Championship season was put on hold by the pandemic, was elated to collect his maiden IMSA victory.

“It’s huge,” he said. “For me, all tracks are new here except for Daytona and Sebring, so there’s always a lot of learning to do. I’m super happy that I have a mega teammate as Connor that I can always rely on. His speed and his experience is awesome. We get along super well together and that’s very important in a close series like GTLM. It’s an awesome result. I’m super happy. My first victory in IMSA with Connor.”

Connor De Phillippi, driver No. 25 BMW M8 GTE (P1): “Today everyone executed perfectly. The race was fast-paced and made for an exciting battle from flag-to-flag. Thanks to the team and Bruno for his fantastic performance.”

John Edwards, Driver No. 24 BMW M8 GTE (P3): “What a great day for BMW Team RLL! Congratulations to Connor and Bruno and the 25 car guys. We’ll be looking for a 1-2 here when we return in six weeks for Petit Le Mans.”

Jesse Krohn, driver No. 24 BMW M8 GTE (P3): “A great day for the team. I think we maximized our chances in the 24 car and today was great preparation for Petit Le Mans.”

Following a pair of second-place finishes where the opportunity for victory was tantalizingly close but unachieved, the drivers of the No. 86 Meyer Shank Racing with Curb-Agajanian Acura NSX GT3 were determined to make it happen in Saturday’s GT Daytona (GTD) portion of the TireRack.com Grand Prix. And they left it to “Super Mario” Farnbacher to bring it home.

Farnbacher drove the final two hours of the six-hour race at Michelin Raceway, pulling away to win by 2.451 seconds after co-drivers Shinya Michimi and Matt McMurry put the No. 86 in position to win. It’s the first victory of the 2020 WeatherTech Championship season and moved Farnbacher and McMurry into sole possession of the GTD points lead.

The No. 86 finished second in the two most recent races – at Road America and VIRginia International Raceway – with chances eluding Farnbacher to secure the wins. A lightning-fast pit stop when Farnbacher took the wheel with just under two hours remaining Saturday pushed him ahead of the No. 48 Paul Miller Racing Lamborghini Huracán GT3 and, this time, Farnbacher wasn’t to be denied. He built a comfortable lead and wasn’t even deterred by the late full-course caution that bunched the field.

All to the relief of his teammates.

“It feels really awesome,” said McMurry, who collected career win No. 7. “All the other races were great results and we came in here leading the championship. But that first place really gave us a good gap to second place in the points, so I think we’re in a really good position now to keep doing what we’ve been doing … and go for another championship.”

Farnbacher was part of the GTD champion team in 2019 and is eager to repeat. He and McMurry broke from a tie with AIM Vasser Sullivan driver Jack Hawksworth with Saturday’s triumph. Farnbacher was relieved to get the win following the recent near misses, and gave full credit to his teammates and crew.

“Today, our pit crew was the key to success,” he said. “They just (nailed) every pit stop and this was definitely one of the keys factors, plus these two guys (Michimi and McMurry) did an amazing job. No mistakes, keep the car clean and just been there where we have to be.”

Michimi is joining the No. 86 effort for the four IMSA Michelin Endurance Cup races. Saturday’s victory is his first in IMSA competition.

“I can’t even begin to describe it,” he said. “I’ve watched IMSA for a really long time, specifically the Daytona 24 (Hours). Finally getting a chance to run in it for the four races this year was a big step. Now winning a race, I really can’t even explain (what it means), to be honest.”