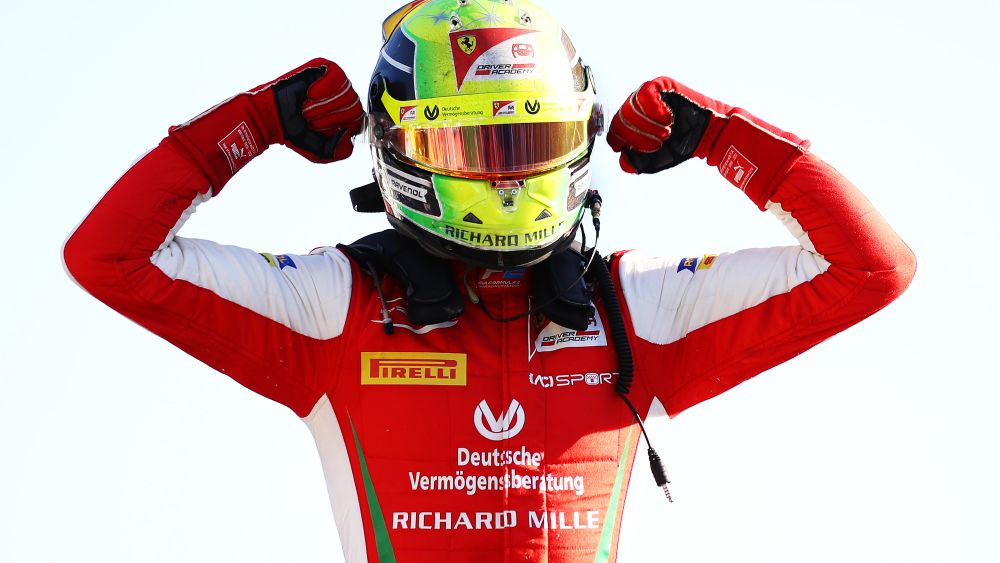 It was a case of seven times lucky for Mick Schumacher, who has blown the drivers’ title fight wide open with his first victory of 2020, and his first ever in a Feature Race. The Ferrari junior took his fourth consecutive podium finish, and his seventh overall this season, to move within three points of first place in the standings.

Schumacher owes much of his victory to a sublime start off the line, as he fired up from seventh to second before the opening corner.

The German was then aided by a disastrous pit stop for pole-sitter Callum Ilott, who had looked so assured out in front, but stalled in the pits and plummeted down the field from P1. Ilott managed a sterling recovery drive, but was forced to settle for sixth place.

His P6 finish ties him in first place for the Championship lead with Robert Shwartzman, who finished P9 having started from 16th.

Ilott kept his cool at the start, gliding off the line and neatly into the first corner, but all eyes were on Schumacher when the lights went out as the German got a dream getaway. He flung his PREMA around Nikita Mazepin and Roy Nissany off the line from seventh, and then weaved to the left and around the outside of three more to rob second place.

Yuki Tsunoda and Ghiotto endured dire getaways from second and third in comparison, and were swallowed up by those around them to drop them down to fifth and sixth, respectively.

Ilott had been unable to pull away from the pack in the opening laps and had Schumacher right behind him. The Ferrari juniors went side-by-side into Turn 1, but the UNI-Virtuosi driver clung on before Schumacher was told on the team radio to ease off his tyres.

Ilott pulled away ahead of his pitstop and dived in for a change on Lap 12, with the lead then almost 2s. But his race began to unravel as his stop was a disaster. The change was clean, but he stalled on the release and the team were forced to jumpstart his car. This handed Schumacher the lead, and dropped the Briton all the way down to the back of the pack.

Ilott’s stop wasn’t the only drama going on, as Nissany and Mazepin went wheel-to-wheel into the first chicane, resulting in the Hitech racer taking a trip into the gravel and falling to P9. From here, things got worse for the Russian driver as his car appeared to enter safety mode, and he dropped to 17th.

Those on the alternate strategy began to pit on Lap 19, and Dan Ticktum swung in from first place and returned in P10, just ahead of Ilott who was working his way back through the field. Schumacher retook the race lead and began to work on building a gap between himself and second-placed Lundgaard.

Ilott had firmly regrouped and regathered following the slow pitstop, refusing to let it define his race. He looked like a man possessed, setting purple sector after purple sector in his attempts to recover, first dispatching of Ticktum, and then Marcus Armstrong, within a matter of laps.

This put him in the wheel tracks of his title rival, Shwartzman, who could do nothing to defend from the unrelenting Briton. Ilott angled his Virtuoso towards the Championship leader heading into Turn 1, and then fired past for P6 – despite them both having the aid of DRS.

Ilott was far from finished. The Charouz machine of Louis Delétraz was next, as the Briton edged into fifth and lined up behind Tsunoda. Ilott’s teammate Guanyu Zhou was making moves as well, relegating Shwartzman to eighth, before shooting ahead of Delétraz too.

Ghiotto was enjoying a recovery of sorts himself, getting over his slow start to return to his starting position of third with three laps to go. The Italian reeled in Lundgaard and dived ahead of the Dane for second.

Schumacher retained first at the checkered flag with a gap of just over 3s to Ghiotto, with Lundgaard taking the final podium place. Tsunoda hung on to fourth, after Ilott’s tyres waned, and he dropped behind Zhou. Ticktum was to seventh, followed by Delétraz, Shwartzman and Jehan Daruvala.

Shwartzman and Ilott are now tied in first place in the Championship on 134 points, just three ahead of Schumacher in third. Tsunoda drops to fourth on 123 points, ahead of Lundgaard who leaps to fifth with 104 points. In the Teams’ Championship, PREMA Racing now lead by nearly 30 points, with 265 to UNI-

“I am very happy with the result today. I think that the team did a mega job to get the car out again after yesterday’s incident in Qualifying. When you are pushing, you are obviously trying to improve yourself and I went a bit over the limit and therefore ended up in the wall.

“It was a long night for the boys, so I really wanted to get good points for them. I didn’t think that I was going to win, but I wanted good points and a good race for the guys. They stayed up until 2am yesterday and worked on the car to get it ready. They did that, and they did it in style, so I am very, very proud of them.

“This race is for them. We as a team really deserve this one. It was a really good race, everything just worked, and I am really, really happy.”