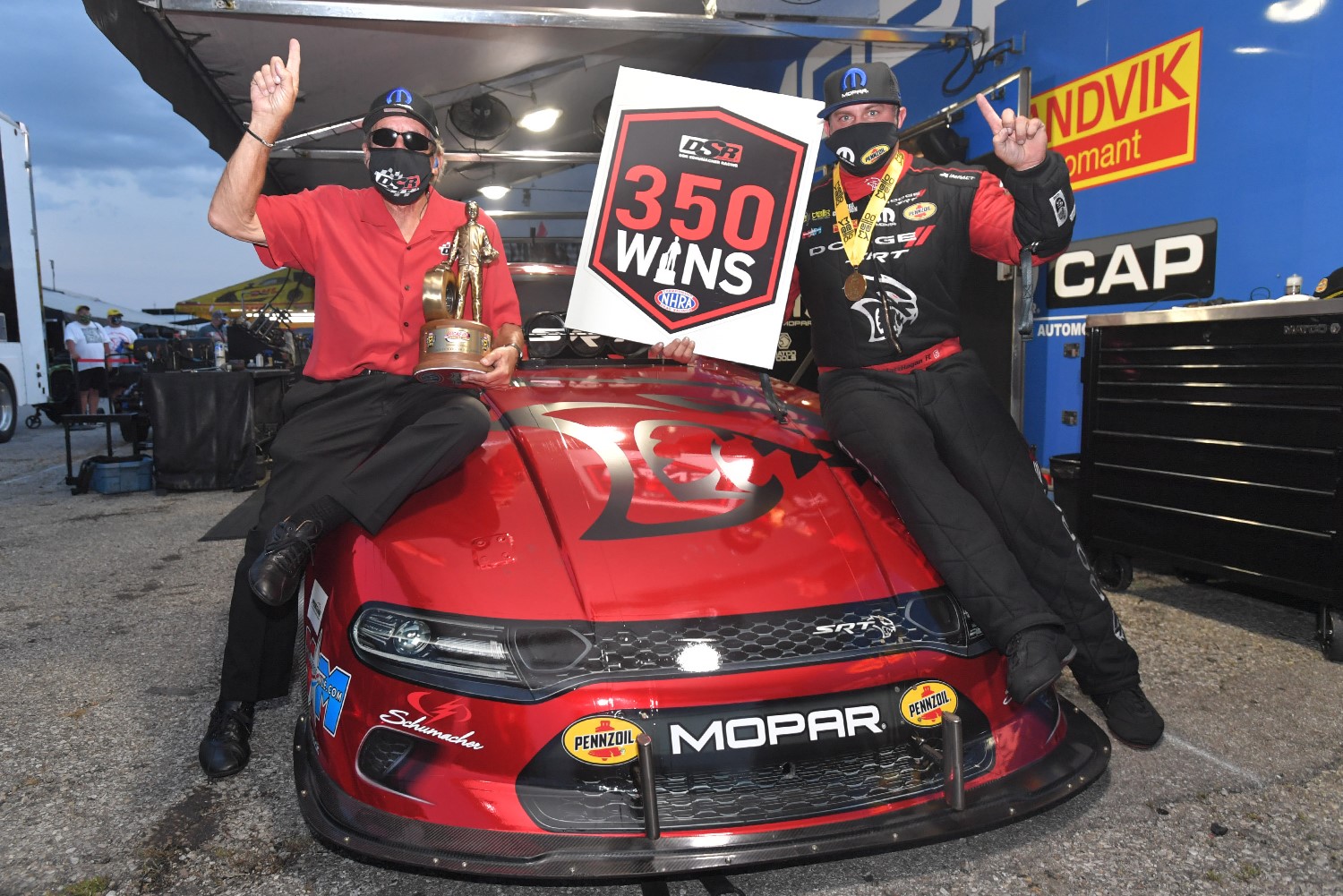 While Don Schumacher Racing (DSR) Funny Car drivers Matt Hagan and Jack Beckman waited more than a month to run the All-Dodge Charger SRT Hellcat final elimination round, rained out at the Summernationals on July 19, it was nonetheless an important race on multiple fronts. Run as their third and final qualifying pass for the 66th annual National Hot Rod Association (NHRA) U.S. Nationals at Lucas Oil Raceway in Indianapolis, Hagan drove straight down the left lane of Lucas Oil Raceway with a 3.919-second elapsed time run at 328.54-mph to defeat his DSR teammate Jack Beckman’s 3.940-second run and take his team into the history books.

The win marked a milestone 350th national event victory for the NHRA’s winningest team, coming 50 years after team owner Don Schumacher won the first of his five national titles as a driver in his Funny Car debut at the 1970 NHRA U.S. Nationals.

“It’s hard for me to even comprehend the team having that many wins,” said Schumacher of the milestone victory that further cements DSR’s drag racing dynasty and positions them as one of the motorsports industry’s most elite teams. “I’m just amazed at the accomplishments that my teams and team members have made over the last 22 years.”

“What a huge milestone, what a legacy Don Schumacher has created here,” said Hagan of the team’s collective achievement which also resulted in his 35th career win with the team. “I lost my brother a couple of years back, and I switched helmets for this race. I know he’s riding with me, but God bless it. I tell you, I’ve probably been as nervous as running for a championship just because you want to get it done.”

Hagan’s second win of the season moves him up to second place in the Funny Car Championship standings behind his DSR teammate Tommy Johnson Jr. with just five national events left on the reworked 2020 NHRA schedule. The win marks the eighth consecutive Funny Car victory for DSR, dating back to October 2019 at Dallas.

It came as part of his qualifying effort at the iconic Labor Day weekend staple affectionately known as “the Big Go”. The result put Hagan’s Mopar Dodge Charger SRT Hellcat Redeye fifth on the eliminations ladder for Sunday’s first round where he will be paired with Paul Lee. It also provides the DSR pilot with the rare opportunity to come away from the weekend with two national event trophies.

“This Mopar Hellcat has been running extremely well,” said Hagan who won the 2016 edition of the prestigious race. “(Crew chief) Dickie Venables has been putting a great race car underneath me. It’s just running hard and I’ve been trying to do my job on the starting line. To get 350 wins for DSR; it’s a big part of my career, a big part of Don Schumacher’s career. To have a Wally already on Saturday night at the U.S. Nationals, the Big Go, it can only get better from here.”

Also hoping to compete for the win is current Funny Car points leader, Tommy Johnson Jr., who secured the No. 1 qualifier position with his Riley Kids Dodge Charger SRT Hellcat running a 3.878-second E.T. at 326.40 mph. For his qualifying efforts, he received a total of six valuable bonus points to add to his tally. His final drive was an improvement on two previous qualifying passes and pairs him up with Dale Creasy Jr. for the first round of eliminations action at the world’s most famous drag race.

“We missed it by just a little bit on Friday night,” said Johnson who earned his 21st career No. 1 qualifier position, his third in the last four events this season, and hopes to vie for his first U.S. Nationals title. “We knew it was going to run a good lap and our car has the performance. I was glad to see a bit of a delay. The sun went behind the grandstands and the guys made a huge change in the clutch and I knew they were going for it. It was evident a few hundred feet into the run that it was on a good one. I knew by how hard it was pushing me back in the seat. The performance is solid. We have three No. 1s and a No. 2 at the four races here at Indy. Now it’s time to turn those into a win.”

Fresh off his HEMI-powered win at the previous Dodge NHRA Indy Nationals event, Ron Capps came out firing on all cylinders in Friday night qualifying to take the provisional No.1 spot. Capps tried to regain the top spot from Johnson, but ended up No. 2 with a 3.881 sec./327.19 mph effort to earn a total of five bonus points and an appointment with 15th seed Jim Campbell for the first round.

Seventh-seed Beckman will see Cruz Pedregon in the lane beside him for the first round as he tries to work his way to a second win this season and a second U.S. Nationals title to add to his 2015 victory. Third in points, the Infinite Hero Dodge Charger SRT Hellcat driver hopes to further close the points gap in the battle for the NHRA Championship.

In Top Fuel action, after two difficult attempts Leah Pruett rocketed her DSR Mopar Dodge SRT Hellcat Redeye Top Fuel Dragster to the third quickest pass of the final session with a 3.742 sec/ 326.24 mph run to earn one bonus point and put her previously non-qualified machine in the show. She will line up next to Terry McMillen on Sunday in her quest to advance to her first final round appearance to battle for the coveted U.S. Nationals Wally Trophy.

Pruett, who is pulling double duty by running in both Top Fuel and Factory Stock Showdown (FSS) categories this weekend, will also have the chance to double-up on trophy hardware by battling through a 32-car field of qualified factory- built vehicles.

Pruett qualified sixth for eliminations contested on Saturday evening while her teammate, Mark Pawuk, put his Dodge Challenger Mopar Drag Pak in the No. 2 spot on the ladder.