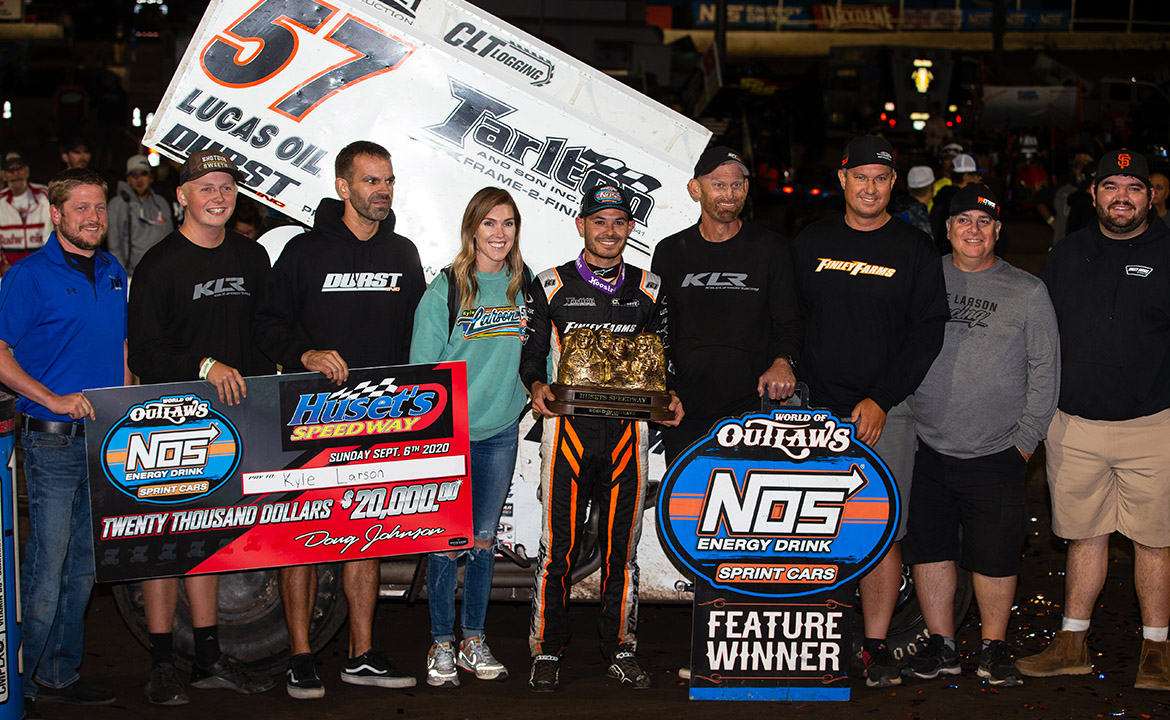 However, Sunday night, with $20,000-to-win on the line, Larson was unwilling to be denied his chance at a Huset’s Speedway win with the World of Outlaws.  Larson methodically worked his way through the field to claim his first win at the South Dakota track, his 10th Series win this season and 18th career win overall.

“It’s definitely cool to get a win here (at Huset’s Speedway),” said Larson, of Elk Grove, CA. “I love bull rings. It had a big curb there. A lot of fun. Really tricky.”

He started the night by earning Quick Time for the second night in a row – third time in three races at Huset’s Speedway – and then went on to win the third Drydene Heat Race of the night.

Madsen made early attempts at stealing the spot from Gravel but failed. Macedo was successful in doing so for a few laps before falling victim again to Gravel after a failed attempt of trying to take the lead from Scelzi.

Macedo’s fortune continued to turn for the worse with 15 laps to go. Jason Sides spun in front of him, causing the two to collide. Macedo tried to spin his car back around straight but ended up colliding with Saturday night’s winner Sheldon Haudenschild. Macedo was able to continue and finish 15th, while Haudenschild suffered too much damage and had to retire – finishing 20th.

On the following restart, Larson, now in third, had enough of watching others battle for second. He darted pasted Gravel for the position on the entry to Turn 1.

The runner-up spot was his and the lead was now within reach. The familiar scent of victory teased his senses.

Like the Larson of races past, he ripped the top of the track, pushing his car to its limits. Doing so helped him gain on Scelzi but also caused him to lose ground when he hit the cushion the wrong way. He didn’t have to work too hard to get back close to Scelzi, though. A caution did that for him.

Scelzi chose the top lane, giving Larson the bottom for the restart with 11 laps to go. The advantage went to Larson. Scelzi accelerated and slid sideways through Turn 4 while Larson had a straight shot off the corner. By the time they reached the flag stand, Larson was four car lengths ahead of Scelzi.

From then on, Larson looked like he had just been playing with everyone. He pulled away to about a three second lead in five laps.

A caution with three laps to go set the stage for Larson to potentially lose another race at Huset’s. But this time, no one, and nothing, was going to stop him. He jetted away from the field on the restart and pulled away to the win – finally conquering the historic track.

“The restarts weren’t working out for me early and I made a couple mistakes on some of the restarts,” Larson said. “We were on it pretty good those last few restarts. I was able to get by Gravel and Gio (Scelzi) shocked me when he took the top. I felt like that was a really smart move to take the top because we’re starting to get good runs on the restarts starting up there. I think it was just his first time up there and spun his tires a little bit and I was able to get a good run down here in the moisture and get clear and lead the rest of the way.”

James McFadden surprised many with his showstopping late race charge. He muscled his way to the runner-up spot by the end of the race after having started 11th.

“Just dialed the restarts there in the last couple,” said McFadden, of Warrnambool, VIC, Australia. “Good to get a runner-up. Would be good to race [Larson]. We just need to start further up toward the front.”

Gravel rounded out the podium, collecting valuable points for Jason Johnson Racing, who is now 14 points behind Kasey Kahne Racing for the team championship – tied with Shark Racing for the runner-up spot.

“I think we had a good enough car to win, just so many restarts I would lose a spot or lose track time about every single time,” said Gravel, of Watertown, CT. “Gio had a really slow pace (on restarts) and our car did not like that. We have to do our homework and fix that up.”

Scelzi ended the night fourth after leading the first 24 laps and Brad Sweet had a solid night with a fifth-place finish. That helped the reigning champion extend his points lead for the second night in a row – now 14 points ahead of second-place Logan Schuchart, who finished ninth. Ten-time Series champion Donny Schatz remains third – now 80 points back – but managed to earn the KSE Racing Hard Charger Award with his march from 20th to eighth.