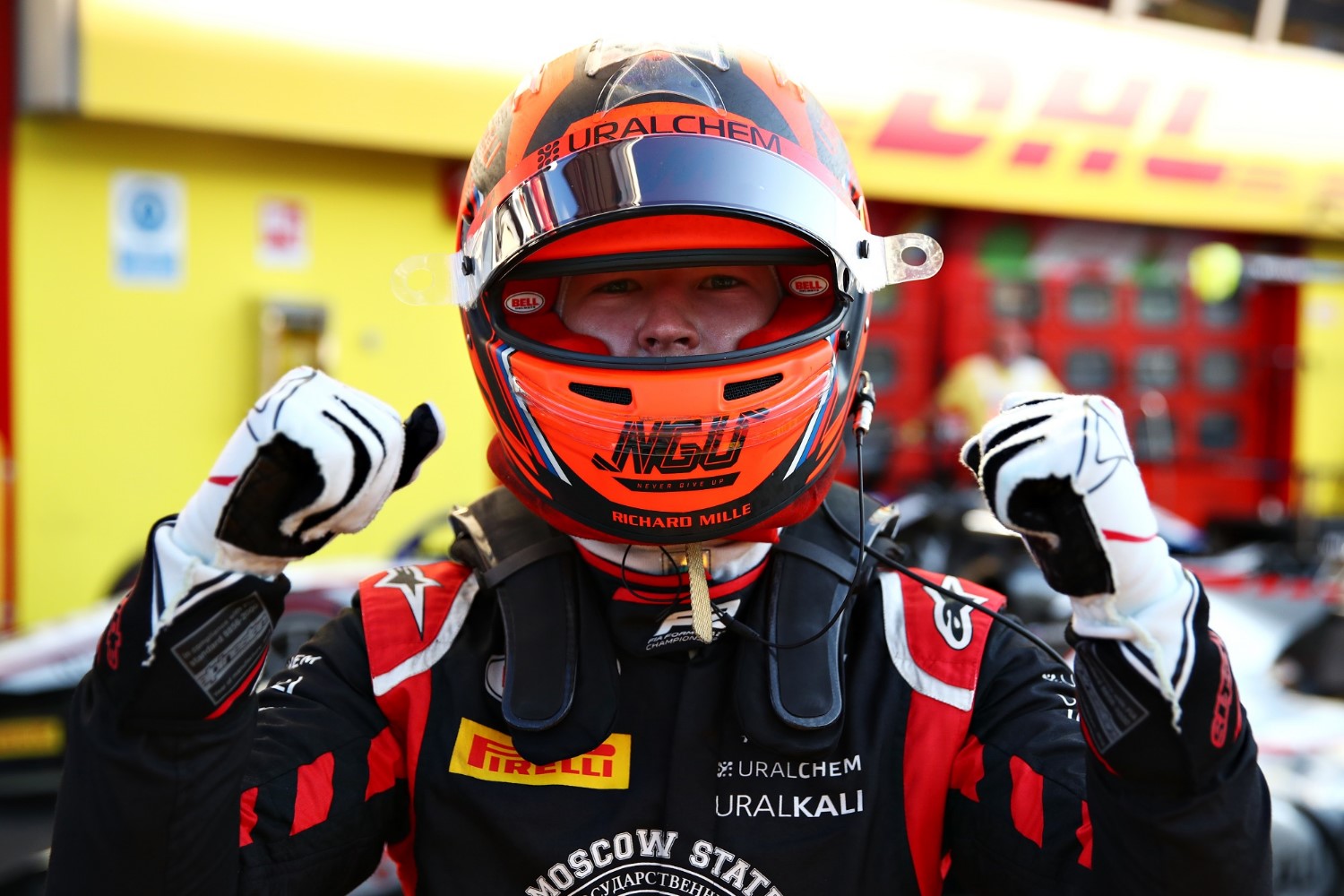 Nikita Mazepin scored his second FIA Formula 2 win from 14th on the grid in an incredible Feature Race at Mugello. The Russian capped off a Hitech Grand Prix one-two, with Luca Ghiotto claiming second on home soil ahead of Charouz Racing System’s Louis Delétraz.

The race was turned on its head by the Safety Car as Giuliano Alesi’s stricken HWA RACELAB machine was recovered from the gravel trap. Mazepin was gifted a golden opportunity for victory on the alternate strategy. The Russian driver found himself in third place after the Safety Car with fresh soft tires.

The Hitech racer made light work of passing long-time race leaders Christian Lundgaard and Ghiotto, who were both on heavily degraded hard tires. Ghiotto was able to cling on to second ahead of Delétraz, but pole man Lundgaard plummeted to sixth having dominated most of the race.

There was also a shift in the Drivers’ Championship as Mick Schumacher stole first place from Callum Ilott, becoming the third different leader in 2020. Ilott had looked on course to retain his lead but suffered front wing damage during a SC restart and was forced to pit, dropping him out of the points.

The third of the Championship’s top three, Robert Shwartzman, saw his own title hopes take a battering as well, as the PREMA racer was forced to retire.

Starting from the front of the grid for the first time in F2, Lundgaard tore into the distance when the lights went out and broke away from the pack. Dan Ticktum held on to second, but Ilott suffered a disastrous start from P3 and was swallowed up by the field and fell to seventh.

Ghiotto got the best start of the lot, hurling his Hitech machine from seventh and up to third ahead of the first turn, finding a gap down the right and then diving through the middle.

The top ten was shuffled in the opening laps, as Felipe Drugovich fired up to fourth ahead of Marcus Armstrong, and Ilott regained a place from Jack Aitken to nab sixth. Yuki Tsunoda made a move himself and nabbed P8 from Carlin teammate Jehan Daruvala.

On the hard Pirelli tires, Mazepin enjoyed a solid start to the race from 14th and had fought his way up to P9 – the highest of the drivers on the alternate strategy – by the time the pit window opened. Race leader Lundgaard was the first to ditch the softs for the hard rubber, returning at the back of the field.

Ticktum inherited the race lead as he attempted to eke more out of his soft Pirellis, but the decision looked to be the wrong one as Ghiotto fizzed ahead of him. The pair then pitted on Lap 10 and returned behind Lundgaard.

The Dane started picking off the field on his return to the track, as Ghiotto got stuck behind Nobuharu Matsushita, costing him valuable time. The Italian eventually got through and was followed in tow by Ticktum and Ilott, who were fiercely locked in battle.

Tsunoda joined the British duo’s fight, having made a move past Armstrong. Ticktum came out on top, while Ilott lost a place to Tsunoda. Meanwhile, Lundgaard was warned on the radio to look after his tires, but had a Ghiotto-shaped shadow following in his wheel tracks.

Robert Shwartzman dived into the pits and returned with fresh soft boots, but he’d not get the opportunity to use them, as he was forced to pull off the road and retire – a big dent to his Championship hopes.

Lundgaard was handed back the race lead when Mazepin pitted on Lap 22, but Ghiotto had fresher tires and was hot on his heels from second. Ghiotto’s job was made a whole lot easier by the emergence of a Safety Car after Giuliano Alesi slowed to a stop on the gravel trap.

Lundgaard held on at the restart, but Ticktum was thrown wide after a coming together with Tsunoda. The Briton got going again but had fallen to 11th. The Carlin driver was served with a 5s time penalty, ending his chance of points.

Theirs wasn’t the only collision, as Aitken, Guanyu Zhou and Schumacher all collided in the midfield. The German survived, but Zhou and Aitken both stopped on track with damage, bringing out another Safety Car.

Ilott was caught up in the chaos and suffered damage himself, forcing him into the pits for a new front wing and dropping him to last. Schumacher was fortunate, holding on to sixth to take the Championship lead.

The other beneficiary of the carnage was Mazepin, who had been gifted third while wearing a shiny new pair of soft tires.

The front three went three-wide at the restart as Mazepin made a stunning move for first place, clinching the position at the exit of Turn 1. The second Hitech of Ghiotto leapt to second, as all of Lundgaard’s hard work was undone. The Dane’s tires had nothing left to give and he continued to fall down the order, eventually falling to P6.

Mazepin held on with ease at the checkered flag, but his teammate was clinging on to second by the skin of his teeth. Ghiotto was desperately defending from Delétraz and the Swiss driver’s fresher, faster soft tires.

The Italian managed to cling on to P2 across the line, with Delétraz forced to settle for third place. Drugovich finished fourth, with Schumacher in fifth and Lundgaard in sixth. Juri Vips took his first points in F2 with seventh, ahead of Artem Markelov, who took his first points of 2020. Armstrong ended up in ninth, with Daruvala tenth.

Schumacher now sits first in the drivers’ standings on 153 points, four ahead of Ilott. Shwartzman is third on 140 points, with Lundgaard fourth on 128. Mazepin is one point further back in fifth. In the Teams’ Championship, PREMA are first on 293 points, ahead of UNI-Virtuosi on 251. Hitech Grand Prix are third, with ART Grand Prix fourth and Carlin fifth.

“I am over the moon with the result. Starting P14, realistically, you need to be very careful setting your goals for the race. To win the Feature Race, the main race, with my teammate in second place, which makes it a double for Hitech, is a dream come true. We could not have even dreamed of this the night before.

“I had a very frustrating Friday and it makes it difficult to go to sleep when you are not satisfied with the job that you have done. I won the race from P14, and it was extremely fun inside the car, but also tough at the same time. I am sure that it was also great to watch. Thankfully it happened, and thank you for the support.”