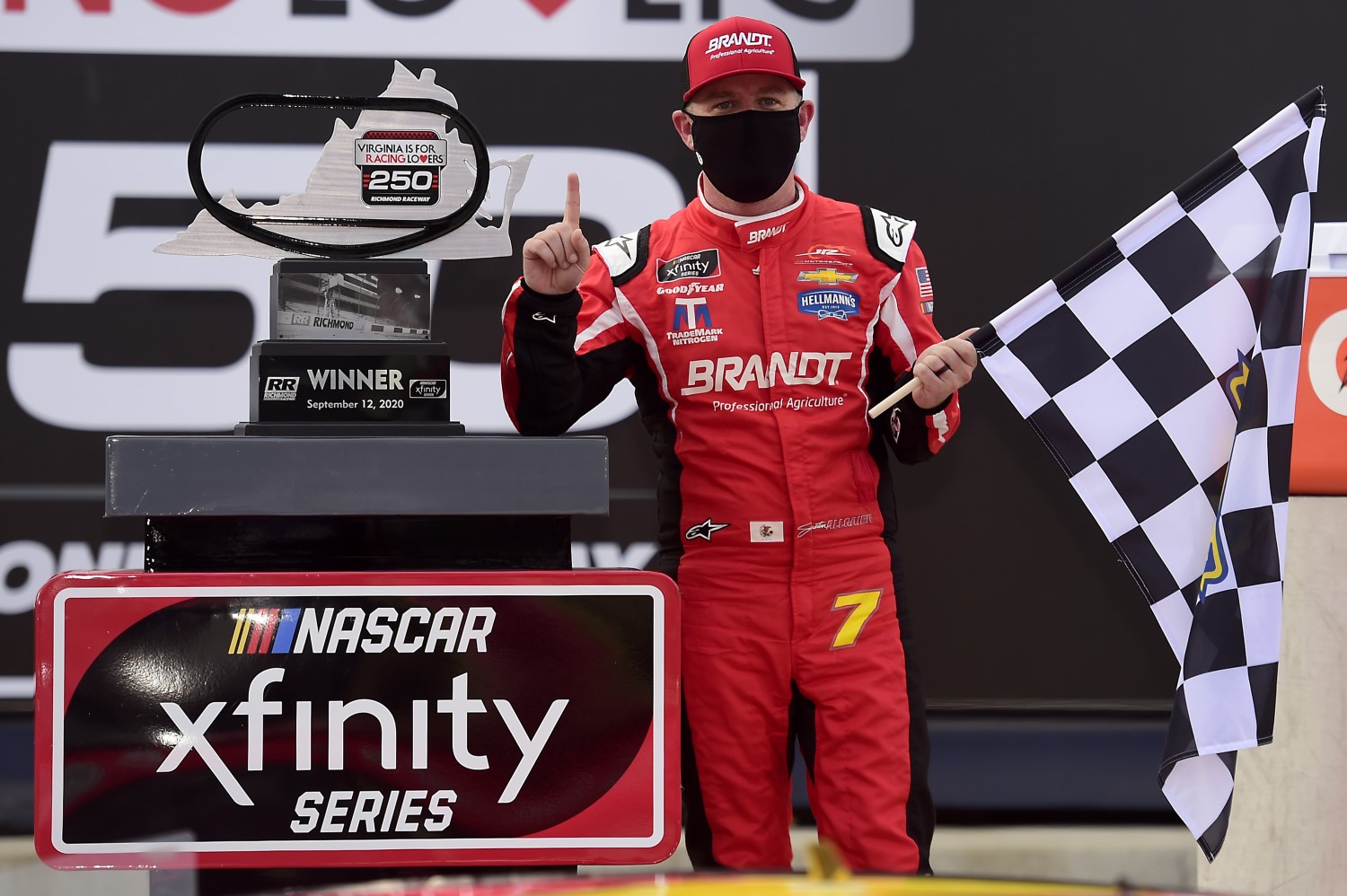 The difference in his race was like night and day, but Justin Allgaier proved himself tops again — winning Saturday afternoon’s Virginia is for Racing Lovers 250 at Richmond Raceway answering a hard-fought victory Friday night and sweeping the Xfinity Series weekend doubleheader.

Allgaier’s No. 7 JR Motorsports Chevrolet essentially dominated the afternoon leading a race best 135 of the 250 laps and holding off his teammate Jeb Burton by a healthy 2.185 seconds for his third win of the season. It is the 14th victory of the 34-year-old Illinois native’s career, and Allgaier’s 770 total laps led in 2020 are the most of any driver this season.

“I knew how good our car was all day,” Allgaier said. “I knew at the end there, I knew we had speed, I knew when we needed to go we could, I just didn’t know how fast. My teammate Jeb Burton did a fantastic job on that last restart, just so proud of these guys.”

Allgaier’s JR Motorsports teammates Noah Gragson and Michael Annett were sixth and seventh, followed by Brandon Jones, Kaz Grala and Austin Cindric, who clinched the Xfinity Series Regular Season Championship with his effort. He receives a 15-point bonus for his season-long work when the series playoffs begin, Sept. 26 in Las Vegas.

“Wish we would have been able to do more with the Penske PPG Ford Mustang today,” said Cindric, whose five race wins in 2020 is a single season career-best.

“We sat down as a team at the beginning of the year and wrote down our top three goals — I’m not a big proponent of setting goals, but if we were going to put something on paper, my number one was winning the regular-season championship.

“Maybe at the beginning of the year or on the outside looking in that was a lofty goal, but we had a lot of speed and a lot of fight and really proud of that effort.”

Chastain’s third-place run gave him back-to-back top-five efforts at Richmond, but still keeps the Kaulig Racing driver winless with only next weekend’s regular-season finale at Bristol Motor Speedway remaining to notch a trophy before the seven-race playoff run.

He kept Allgaier honest in both races and was a front-runner all afternoon — his 58 laps out front second only to Allgaier’s effort. And they each won a stage — Allgaier the first stage and Chastain, the second. But neither Chastain nor Jeb Burton was able to wrestle the lead from Allgaier during a long green flag run after the second stage nor on a restart with 13 laps remaining following an incident with Riley Herbst and Brandon Brown.

Brown was able to continue and scored an impressive 11th-place finish — good enough to keep him 49 points ahead of 17th-place finisher Jeremy Clements in a duel for the 12th and final Xfinity Series Playoff position. Brown hopes to hold on to his 49-point advantage over Clements next Friday in the regular-season finale at Bristol Motor Speedway, the Food City 300 at 7 p.m. ET on NBCSN, PRN and SiriusXM NASCAR Radio.

Note: There were no issues in post-race inspection in the NASCAR Xfinity Series garage.