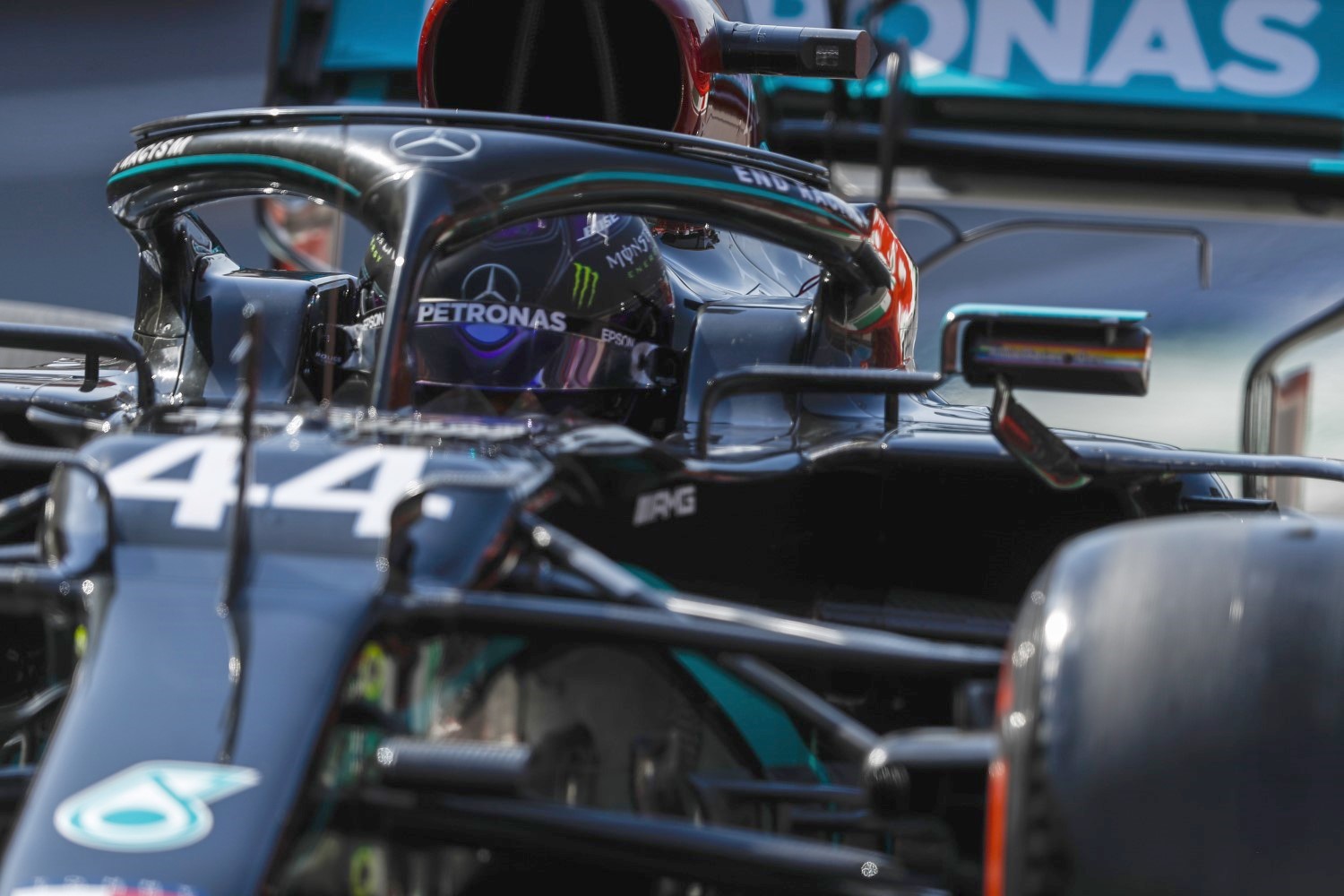 The Mercedes duo of Lewis Hamilton led every lap of the Tuscan GP at Mugello Sunday in yet another borefest F1 Grand Prix. Yes there were two red-flags that provided a bit of excitement, but as far as the racing goes F1 races have become so predictable – with Mercedes making all the other teams look grossly inferior.

Lewis Hamilton got the jump on teammate Valtteri Bottas after an early red-flag stoppage due to a 3-car crash and was never headed. Bottas simply isn’t fit to shine Hamilton’s shoes.

“It’s all a bit of a daze man, that was three races in one day,” said Hamilton. “This track is phenomenal, keeping Valtteri behind was not easy. All those restarts. the focus needed – it was really really hard!”

“It’s disappointing. I’ll just keep pushing and try to get better, it has to, the luck has to turn for me at some point,” stated Bottas

The race was red flagged on Lap 9 without a racing lap having been completed.

The Safety Car had been called for an opening lap tangle which involved Max Verstappen, Pierre Gasly, and Romain Grosjean at Turn 2 only for a restart crash to halt proceedings.

On the restart Antonio Giovinazzi slamming into the rear of Kevin Magnussen, the pair then plowed into by Carlos Sainz Jr. while the incident also accounted for the innocent Nicholas Latifi. The race was red-flagged at that point.

“I’m really happy, I can breathe,” said Albon. “It feels great to be here. It’s brutal, the high speed in Sector Two, you feel it!”

The race was red-flagged a 2nd time when the Racing Point of Lance Stroll crashed at Turn 9.

Replays showed that Stroll may have picked up a rear tire puncture, the Canadian helpless as the rear slid away, and he flew through the gravel and into the barriers.  He climbed out unaided and unhurt.

On the 3rd standing Start Daniel Ricciardo got Valtteri Bottas for 2nd but the next time around Bottas dusted him and took 2nd.

Albon then disposed of the Renault two laps later.

Eighth for Leclerc and P10 for Vettel isn’t the result Ferrari wanted, but at least they saw the checkered flag today. And it is the first time they have had both cars in the points for five races.

Lewis Hamilton
Today was one of the most challenging days, physically and mentally, I’ve experienced. I’m pretty exhausted to be honest, but it feels fantastic to win such a crazy race. It’s all a bit of a daze and felt like three races in one day. It was incredibly tough out there, this track is phenomenal and Valtteri was pushing me hard, so it wasn’t easy at all. With all the restarts and the focus that was required, it was really hard. The first start wasn’t great and I lost the place to Valtteri, but then the second start was better and I got the place back. I had a comfortable advantage after that point but then there was another red flag. Anything could have happened on those restarts but fortunately on the last one, I got my best start of the day and was able to maintain my position. Valtteri was always right there with me and I couldn’t make a single mistake, otherwise he’d be right there to pass me on the straight. A huge thank you to the team here at the track and back at the factories for all their hard work to make this result possible, and this is a brilliant circuit, so I’d love to come back in the future.

Valtteri Bottas
It feels like we had three races today and it was really tough out there. The first part of the race went well for me, but also was pretty short. I had a dream start and maintained my position on the first Safety Car restart. Once I lost the position to Lewis on the second start, it was really tricky to get it back. I did everything I could and was pushing really hard, especially in the middle stint so I could maintain the distance. But when you are behind, you need to slide the car more and that uses up your tires. There weren’t many opportunities once I lost the place, but that’s how it goes, and I just need to keep pushing and keep trying to get better. And that’s what I’ll do.

Toto Wolff
What an unbelievable race today with so many red flags and restarts. There was so much going on and it proved to be quite a tough day for all the teams. First of all, I’m glad to see that everybody is safe and okay after the incidents during today’s race. The crash on the main straight looked very scary, as did Lance’s off. For us, it was a great race and a fantastic result for the team with a 1-2 finish at Mugello. Both of our drivers put in very strong performances and it’s just what we’d hoped for. Well done to everyone in the team. To extend the lead in the Drivers’ and Constructors’ Championships feels good and now we have one weekend off, before we go again in Russia.

Andrew Shovlin
That’s the 100th win since Mercedes returned to F1 as a manufacturer in 2010 and a really proud milestone for everyone in Brackley, Brixworth and Stuttgart. What a race though! Plenty of starts kept it pretty exciting. Lewis lost out at the first one with a bit of wheelspin off the line. Valtteri also had a tough time with marbles on the left-hand side of the grid for the final restart and lost a place to Riccardo. The Safety Car restart was probably more challenging than the race start itself. We’d spent a long time this morning talking it through, we knew that the Safety Car lights would go out really late which meant the lead driver can’t go early as everyone will sit in their tow and pass. Valtteri was controlling the pace at that stage and timed it well, but behind him it looked like a few cars had gone slightly too early and it caused a bit of chaos which brought out the red flag. It was one of those races where it’s normally hard to stay in front, as it’s so hard to guess what’s going to happen next. But the team

Alex Albon
“I’m really happy and it took a while to get here! It’s something I’ve always wanted and one way or another we haven’t been able to get it so to be there today is pretty special. It’s really nice to give the Team something back after they’ve supported me since day one and show them what I can do. It was a tough race and definitely not one of the easy ones. This track is brutal, especially the high speed corners in sector two, and with so many re-starts to manage we had our work cut out. We struggled to get off the line, so I knew I had to be aggressive to get all the overtakes done, but we had a really good car and we know it’s good on the brakes, so we used that to our advantage. When we lost two positions on the final re-start, I was fired up as I wasn’t going to let the opportunity of a podium go by, so I pushed hard to get third and I’m over the moon with today’s result.”

Max Verstappen
“I am of course very disappointed as I know this could have been a really good race for us. I had a good launch at the start of the race and went around Lewis but then the car just didn’t accelerate, so I lost a lot of speed and had no power. I then dropped back into the midfield and got hit from behind. When you drop into the middle of the pack in the first few corners like that it’s quite easy to get involved in a crash, so I’m not disappointed about that, we shouldn’t have been in that position in the first place. There isn’t much more to say but it is just really disappointing for the Team that we had to retire again, especially when we looked so competitive but it is of course good to see Alex maximize the result and get on the podium.”