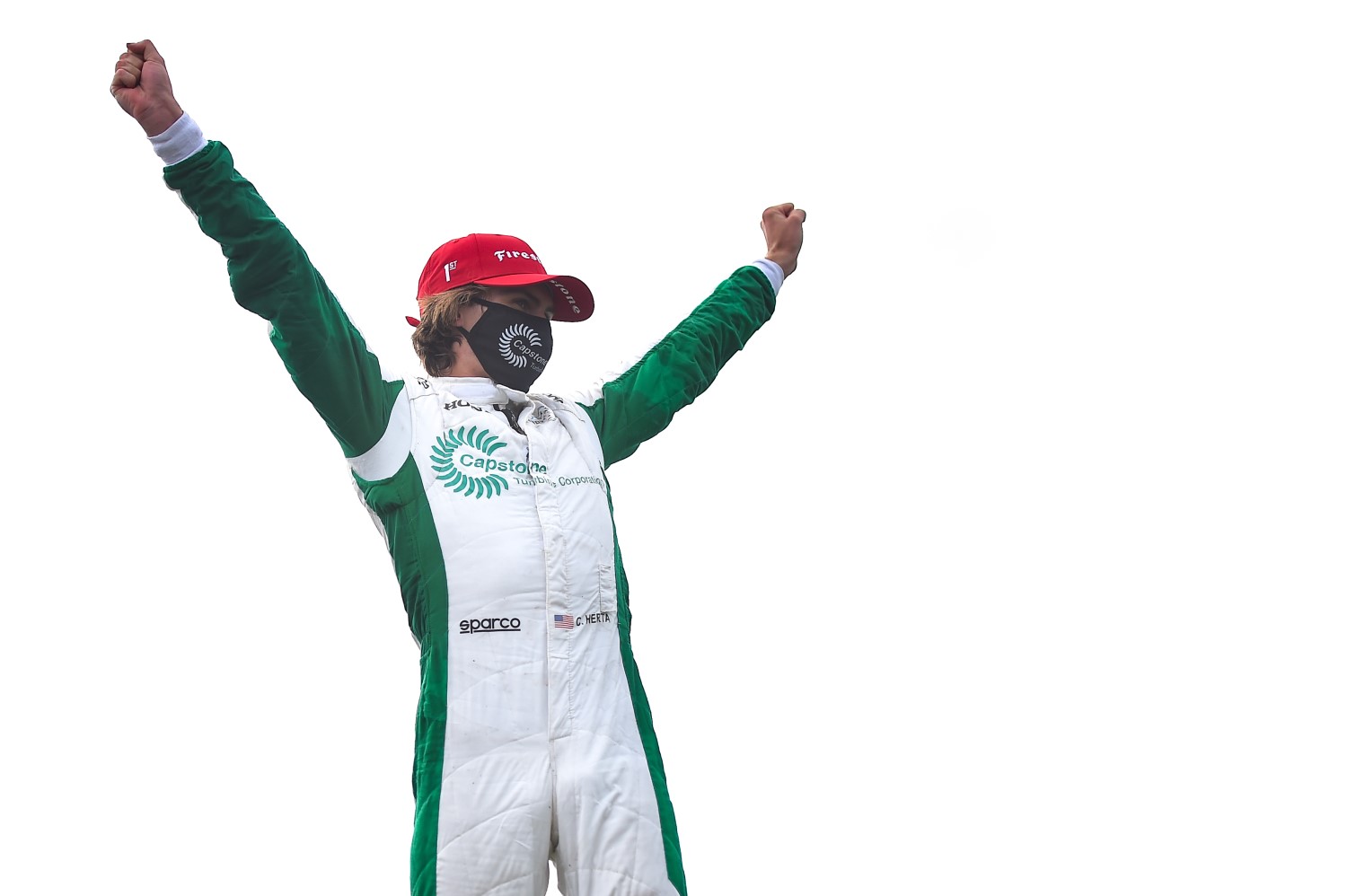 Starting from pole, youngster Colton Herta led the first Andretti Autosport 1-2-3- in 15 years by winning the 2nd half of the Honda Indy 200 at Mid-Ohio Sunday. It was Herta’s 3rd career IndyCar win.

Herta schooled his teammate in the #27 NAPA Honda – Alexander Rossi – who had nothing for his less experienced teammate. Herta led 57 of 75 laps while Rossi led none. Rossi had closed on Herta but was never able to mount a passing attempt as Herta controlled the gap from the lead and winning by 1.3826s.

Graham Rahal and Marcus Ericsson rounded out the top-5 to give race sponsor Honda a 1-2-3-4-5 finish after getting beaten by two Penske Chevy’s on Saturday.

“I’m so happy,” Herta said. “We’ve been knocking on the door almost every weekend. We’ve had the pace. But for some reason or another, one thing has gone wrong or this thing has gone wrong. We finally put everything together. We got the pole this morning, had a stellar car. Everybody on the Capstone Turbine crew gave me an incredible car.”

After finishing 1-2 on Saturday the Penske team faltered on Sunday with Will Power and Josef Newgarden 7th and 8th.  Power went off course in qualifying in the wet but recovered for 7th.

Point leader Scott Dixon spun in Turn 1 on the hard Firestones and had to settle for 10th – passing Rinus Veekay on the last lap to gain another point.

The last time Andretti Autosport swept the podium was in 2005 at St. Petersburg when Dan Wheldon scored the win and fellow Andretti teammates Tony Kanaan, Dario Franchitti and Bryan Herta – Colton Herta’s father – followed to sweep the top four finishing positions for what was known as Andretti Green Racing at the time.
“It’s so huge, so huge,” team owner Michael Andretti said. “Thank God we came here to Mid-Ohio. We were a little worried that we weren’t going to be able to get here, but Kevin Savoree and those guys did a great job getting this race on, and it paid off for us, man. One-two-three. The way things have been going for us this year, this is huge for us, the whole team.”

Herta led 57 of 75 laps from the pole after winning the NTT P1 Award in a thrilling qualifying session Sunday morning.

The race also got off to an action-packed start as Herta and second-place starter Santino Ferrucci went side-by-side into Turn 4 of the 13-turn, 2.258-mile circuit. Ferrucci lost control of his No. 18 SealMaster Honda and went into the grass. Ferrucci then returned to the track, where he collided with Dale Coyne Racing teammate Alex Palou in the No. 55 Guaranteed Rate Honda and Felix Rosenqvist in the No. 10 NTT DATA Chip Ganassi Racing Honda.

Ferrucci was assessed a penalty for avoidable contact, and Palou and Rosenqvist were eliminated from the race. Ferrucci finished 14th, while Rosenqvist and Palou finished 22nd and 23rd, respectively.

The action continued on Lap 22 when points leader Scott Dixon made a costly mistake in Turn 1 that led to a disappointing 10th-place finish after starting third.
Dixon powered through the fastest corner on the track and lost control of his No. 9 PNC Bank Chip Ganassi Racing Honda, spinning on corner exit. Dixon didn’t hit anything, but the track remained under green flag conditions, and Dixon fell to 20th position.

“I think we kind of tried to have the tires a little better for longer in the run, so I think our cold pressures were really low,” Dixon said. “We really struggled on the restarts, especially the initial start and that restart. Plus, everybody behind me had reds on. So, I got aggressive, hit the overtake on the exit of (Turn) 1, and just way too much Honda power there and spun the tires and spun the car.

“So, it totally caught me off guard. Total rookie mistake. I’m so bummed for the team. It’s just such a stupid mistake I shouldn’t have made. Obviously, the car was fast. We were able to fight our way through the pack. It should have been an easy points day.”

Five-time NTT INDYCAR SERIES champion Dixon spent the rest of the race trying to rebound, running as high as fourth while on an alternate pit strategy. Dixon was forced to give up his track position on Lap 59 when he pitted for the final time. With the freshest tires in the field, he rallied for his second 10th-place finish of the weekend.

The challenging day did no favors to Dixon’s standing in the championship. His lead over Josef Newgarden shrunk to 72 points, continuing a downward slide for Dixon in the last three races.

Since his most recent win in the first race of the doubleheader at World Wide Technology Raceway on Aug. 29, Dixon has lost 45 points to Newgarden.

Newgarden, the defending NTT INDYCAR SERIES champion, had a quiet day, finishing eighth in the No. 1 PPG Team Penske Chevrolet. He gained four points on Dixon after entering the day down 76 points.

“The easiest way (to win the championship) is going to try to win Race 1 at the Indy road course and then do the same in Race 2,” Dixon said. “It would be nice to go to St. Pete without having to worry about it. But the NTT INDYCAR SERIES is so tight right now. The competition is super tough. Trying to rebound off days like this is super tough.”

There are three races left in the 2020 NTT INDYCAR SERIES season. The next event is the INDYCAR Harvest GP doubleheader Oct. 2-3 on the 2.439-mile IMS road course. The season ends with the Firestone Grand Prix of St. Petersburg on Sunday, Oct. 25.