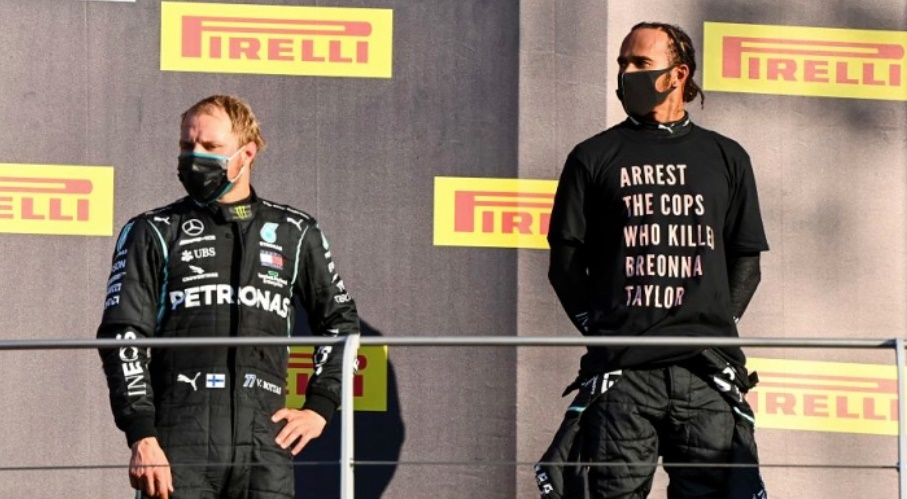 (GMM) The FIA has backed away from issuing a potential penalty to Lewis Hamilton over his wearing of a politically-themed t-shirt on the Mugello podium.

Earlier, a spokesman for F1’s governing body admitted that “active consideration” was being given to determining whether the six-time world champion breached the sport’s anti-political rules.

It is believed, however, that it has at least been made clear to the teams that political messaging in official forums like the podium and FIA press conferences is inappropriate.

Those concerns appear to be justified, with 1996 world champion Damon Hill admitting there had been “such a mixed reaction” to Hamilton’s highlighting of a police shooting in America.

“But F1 has always had its head in the sand over any issue that might make people think about anything other than F1,” Hill added.

“It has to make space for these messages if it is to be embraced by the wider world.”

Indeed, Mercedes is backing its 35-year-old star driver completely, with Toto Wolff declaring in Mugello that the team is “leaving it to Lewis about what kind of t-shirts he wants to wear and what he does to support that” initiative.

Hamilton, meanwhile, insists that he will not stop his activism.

“I want you to know that I won’t stop, I won’t let up, I won’t give up on using this platform to shed light on what I believe is right,” he said on Tuesday amid news of the FIA investigation.

“This is a journey for all of us to come together and challenge the world on every level of injustice, not only racial.”

RaceFans reports they hear that no submission was made to the stewards concerning Hamilton’s actions and no investigation is being conducted as a result of them.

Andrew Benson of the BBC writes – Formula 1 bosses are looking into whether Lewis Hamilton broke rules at the Tuscan Grand Prix by wearing a T-shirt highlighting police brutality.

A spokesman for the FIA said the matter was “under active consideration”.

He said the FIA was a non-political organization and was considering if Hamilton’s T-shirt broke its statutes.

The T-shirt said: “Arrest the cops who killed Breonna Taylor” – a black woman shot eight times in her Louisville, Kentucky home by US police in March.

Hamilton’s shirt, which he wore during the pre-race anti-racism demonstration and on the podium, also said: “Say her name.”

It was not immediately clear which statute from governing body the FIA was at issue.

Asked whether the FIA considered the T-shirt to be bearing a political message, the spokesman said: “That’s the consideration we are looking into.”

Before Spa Hamilton explained why he wasn’t boycotting the race

He said back then “But that is in America and I don’t know if me doing anything here will particularly help … we’re in Belgium, we’re not in the United States.”

Now his shirt references an incident in Louisville, Kentucky – USA.  So, why does he now think this shirt will ‘particularly help’?

According to GPToday.com, Lewis Hamilton is facing a potential FIA investigation over the political t-shirt he wore before and after his Tuscan Grand Prix victory.

Hamilton has previously worn ‘Black Lives Matter’ t-shirts to highlight ongoing anti-racism struggles that have been brought to the attention of a global audience after numerous incidents, notably in the United States.

The six-time F1 champion, however, may have overstepped the mark with the t-shirt on display at Mugello that highlighted an act of police brutality in the US.

Both during the now customary pre-race anti-racism demonstration, and again as he conducted a TV interview and then stood on the podium, Hamilton wore a t-shirt with the message ‘Arrest that cops who killed Breonna Taylor’. On the rear was a picture of Taylor and the words ‘Say her name’.

The 26-year-old medical worker was shot and killed in March by plain-clothes police officers who mistakenly raided her home in Louisville, Kentucky.

Such a public political display, however, may have breached FIA statutes, with the matter now “under active consideration”, according to a spokesperson.

Explaining why he wore the t-shirt, Hamilton said post-race: “It took me a long time to get that shirt.

“I’ve been wanting to wear that and bring awareness to the fact there are people out there being killed on the street.

“And then there’s someone who was killed in her own house, and they’re in the wrong house, and those guys are still walking free.

“We can’t rest, we have to continue to raise awareness of it.”