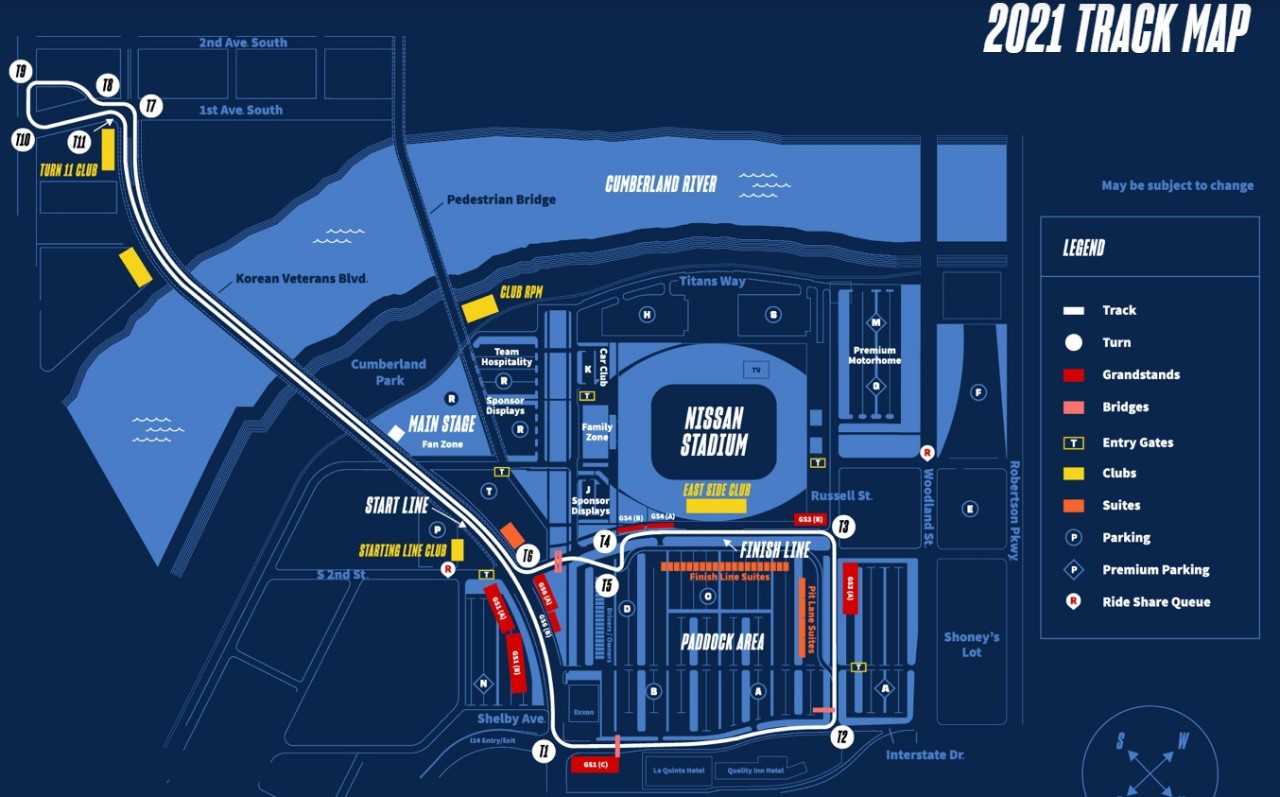 This report has been update below.

It’s been rumored for quite sometime but today it became official, the NTT IndyCar Series  and the City of Nashville, Tenn. announced that the IndyCar Series will race on a 2.17-mile street circuit around Nissan stadium starting in 2021 for three years.

With Roger Penske, Mark Miles, Josef Newgarden, Founder Matt Crews, Race President Chris Parker, and Nashville Republican Mayor John Cooper speaking, the race will be called the Music City Grand Prix and the first race will be run Aug 6-8, 2021. It is a privately funded event with no government money behind the event, including police and fire,  and 100,000 are expected to attend.

The Tennessee Titans Football team is the primary sponsor of the event.

To make this race even more spectacular, this course is designed to challenge the drivers and excite the fans. This temporary track, or street circuit, takes racers by Nissan Stadium (home of the NFL Tennessee Titans) and over the Korean War Veterans Memorial Bridge into downtown Nashville.

IT’S MORE THAN A RACE. IT’S A FESTIVAL.

The top musical acts in the world, the most delicious cuisine Nashville has to offer, and the greatest drivers around—whatever your groove is, the Music City Grand Prix has it.

With multiple stages in place just a few blocks away from the Honky Tonks of Broadway, you can catch a show from one of the most popular artists recording today or see an up-and-coming performer steal the spotlight.

Entry into the Club RPM lounge at The Bridge Building with a style all their own, the Nashville restaurant scene is quickly becoming a foodie destination. The event will feature local food trucks and a food court, or you can visit one of the many restaurants in the area. If you are looking for traditional Southern cuisine like Nashville Hot Chicken or you want a high-end experience from one of the many internationally recognized chefs, we have something for everyone.

This unique course will test every driver’s ability. With seating and viewing areas throughout the course, you will see racing at its finest. This event will also feature activation areas and a wide range of exciting activities the whole family can enjoy together.

MCGP is engaged with Monroe Carell Jr. Children’s Hospital at Vanderbilt to bring drivers to the kids to learn about racing as well as set up fun, interactive events for kids to explore the magic of INDYCAR.

The Music City Grand Prix, in partnership with INDYCAR, is bringing a new sound to Nashville. The Music City Grand Prix announced today that the newest NTT INDYCAR SERIES race will debut Aug. 6-8, 2021, in Nashville, Tennessee. The three-day international festival of speed and sound will be staged on a temporary grand prix circuit in downtown Nashville and around the Nissan Stadium campus.

Attendees can look forward to the best Nashville has to offer, including live music performances by top artists, best-in-class chef-curated food experiences and entertainment that centers on speed in a way only Music City can serve up.

With Nissan Stadium serving as the paddock for the race, the 2.17-mile temporary track will race across the Korean Veterans Memorial Bridge into downtown Nashville and back, making the Music City Grand Prix one of the only events in motorsports to cross over a major body of water.

The first street course added to INDYCAR since 2013, it features 11 turns and plenty of straightaways for drivers to pass. These and other dynamic features will create an exhilarating experience for both drivers and fans.

“The Music City Grand Prix will be a one-of-a-kind NTT INDYCAR SERIES experience anchored in the heart of Nashville’s action-packed, exhilarating downtown corridor,” said Mark Miles, president and CEO of Penske Entertainment Corp. “Nashville is a world-class city and global entertainment capital that provides an exceptional platform for our Series. From professional sports teams and top live music acts to a burgeoning food and culture scene, it is a perfect home for a racing event of this magnitude. Urban street festivals have become a huge part of our DNA at INDYCAR, and this three-day festival—complete with a course that pushes the limits—will highlight everything Nashville and the sport have to offer, providing international travelers, racing enthusiasts and local thrill-seekers alike with an experience of a lifetime.”

A Local Event With an International Draw

“Nashville continues to serve as a world-class entertainment and event destination, so adding an urban racing festival of this caliber is a logical next step for the city,” said Butch Spyridon, president and CEO of Nashville Convention & Visitors Corporation. “From the 2017 NHL Stanley Cup Finals to the 2019 NFL Draft, Nashville knows how to host sporting events of all kinds while making them a party. The Music City Grand Prix underscores why Nashville was named Best Sports City in 2019, and we look forward to the national and international marketing it will bring to the city.”

“Nashville is a special place, and the announcement of the Music City Grand Prix truly marks a huge step forward for our community as we look to the future and a return of our thriving and unique entertainment scene,” said Nashville Mayor John Cooper. “This announcement could not have come at a better time. The event represents a tremendous private investment in the city and a catalyst to our economic recovery.”

In keeping with true Nashville community, the Music City Grand Prix has forged key partnerships in order to bring this privately funded event to fruition. Music City Grand Prix is appreciative for the collaboration with INDYCAR, the Tennessee Titans, the Nashville Convention & Visitors Corporation, Metro Government of Nashville & Davidson County, the State of Tennessee, the Nashville Sports Council and the Middle Tennessee State University School of Concrete and Construction Management.

Club RPM and the Founders Experience

While the event will feature a variety of affordable and attractive ticket options to ensure all attendees experience a weekend unlike any other, the Music City Grand Prix is currently offering two distinctive membership initiatives. Club RPM is a premium VIP experience. Early members will gain access to concierge-style service for entertainment reservations, valet parking and entry into the Club RPM lounge at the Bridge Building. Additionally, fans can become a Music City Grand Prix Founder and receive reserved seating, exclusive discounts and priority purchase opportunities on parking, hotels and more.

Additional information, including the Music City Grand Prix schedules, artist lineup, food experiences and more, will be released at a later date. Visit www.musiccitygp.com to find more details on the event, sign up for Club RPM or become a Founder.