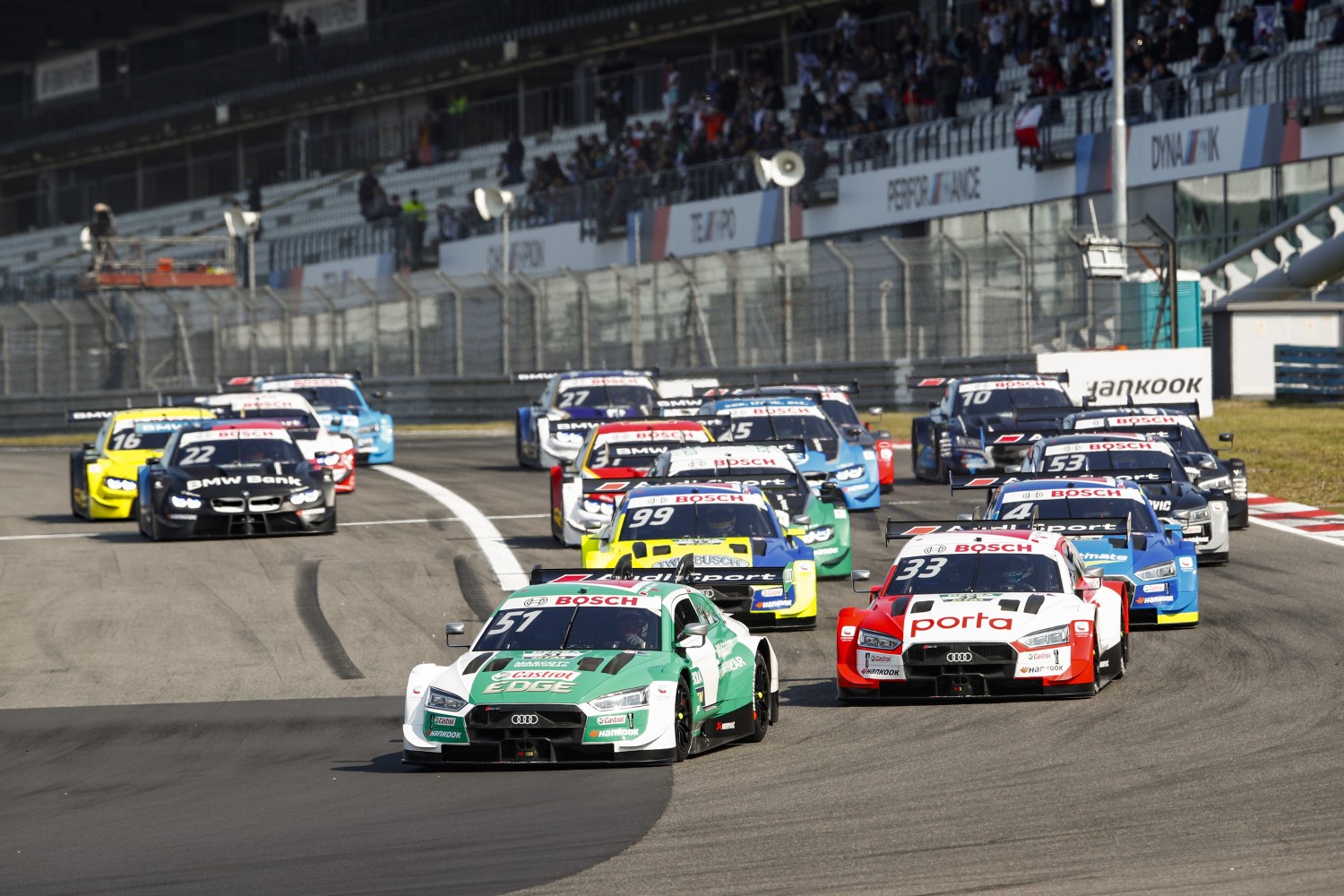 Rush hour at the ‘Ring: the Nürburgring sprint circuit, just 3.6 kilometers long, will be the stage for the racing action in the DTM’s sixth season round this weekend (18-20 September). Therefore, it will be tight for the racing drivers with their 640 hp strong touring cars from Audi and BMW. And it is getting increasingly close in the championship, too. With his second win of the season at the Nürburgring Grand Prix circuit last weekend, Dutchman Robin Frijns has reduced the gap to points’ leader Nico Müller from Switzerland while defending champion René Rast (GER) is also still in contention in the three-way battle for the coveted champion’s trophy.

The stage is set for a hot DTM weekend and temperatures above 20 degrees in the Eifel where spectators will be admitted once again. At a price of 49 Euros, the grandstand tickets with strictly limited availability can only be ordered until Sunday at noon, either online from the DTM Ticket Shop (tickets.dtm.com) or from the DTM Ticket Hotline (+49 1806 386 386).

Currently, the DTM is running flat-out through its schedule. After Assen in The Netherlands and the successful return to the Nürburgring Grand Prix circuit, the sixth season round at the sprint configuration in the Eifel is the third race weekend within only 16 days. Especially for the teams who only have little time to prepare the cars and who have converted the Nürburgring paddock into a huge competition workshop during the week, this sequence of activities is a real stress test. Many drivers are using the time either to drive fast laps of the legendary Nordschleife or to keep themselves fit with extensive bicycle rides through the beautiful Eifel scenery.

46 points separate Müller, Frijns and Rast – 56 points at stake at the Nürburgring

Müller, Frijns or Rast again after all? That is the decisive question in the battle for the prestigious title. Nico Müller, who had a commanding lead following his three wins at the start of the season, has seen his advantage decrease. With four wins under his belt, he has 205 points to his tally. Frijns, meanwhile, has 176 points and therefore got within 29 points to his Swiss Audi Sport Team Abt Sportsline teammate. Two-time champion Rast (159), driving for the Audi Sport Team Rosberg, is 17 points down on Frijns and 46 down on Müller. At the Nürburgring alone, a maximum of 56 points for a pair of wins and as many pole positions is on the line. With eight races remaining and a maximum of 224 points still to be won, the battle for the title remains fully open. The next rivals are Loïc Duval (FRA, 85) and Mike Rockenfeller (GER, 79), driving for the Audi Sport Team Phoenix, based at the Nürburgring. The best-placed BMW driver is Assen race winner Sheldon van der Linde (RSA) with 72 points, sixth in the standings.

Once again, the sprint circuit will be the stage for the battle for the valuable points on Saturday and Sunday (both days live on SAT.1 from 13.00 hrs and on the streaming platform DTM Grid). The short track configuration of the Nürburgring with its many variants has a length of 3.629 meters. René Rast already has won three times at the sprint circuit, also known as ‘Nurburg-Schleife’, more than any other driver in the current DTM field. The 33-year-old also holds the official lap record at 1m 21.358s, achieved on 14 September 2019. Back then, Rast won on Saturday from the BMW duo of Bruno Spengler (CDN) and Marco Wittmann (GER). On Sunday, Audi had a clean sweep of the top three with Jamie Green (GBR) from Frijns and Rast. So far, Audi has already scored 15 DTM race wins at the sprint circuit.

First and foremost, it is the DTM that is providing pure motorsport action with its breathtaking touring cars, the sound of which set any motorsport fan’s pulse racing. The newly introduced DTM Trophy has also established itself among the fans. The young and ambitious drivers of the production-based GT sports cars from six manufacturers are staging thrilling position fights and therefore provide excellent entertainment. Two additional race series have even more highlights in store for the spectators. The Tourenwagen Classics (TWC) spark nostalgic memories with legendary touring cars, particularly from past DTM days, from Alfa Romeo, Audi, Ford, BMW and Mercedes to Opel. The same can be said about the Tourenwagen Legenden (TWL). At the wheel of these precious touring cars, numerous star drivers from the past like Harald Grohs, Roland Asch, Kris Nissen, Klaus Ludwig and Kurt Thiim are showing that they have lost nothing of their appetite for hard racing.

Only one week later: nine DTM drivers to race in the 24-hour classic in the ‘Green Hell’

It seems that for most DTM drivers, a fortnight in the beautiful Eifel region isn’t enough. Only one week later, the traditional 24-hour race will be held at the legendary Nordschleife. With Robin Frijns, Jamie Green, Nico Müller, René Rast and Mike Rockenfeller, Audi has entered all its DTM works drivers bar Loïc Duval for the race in the ‘Green Hell’, as well as the Audi Sport Team Phoenix. BMW is participating in the classic 24-hour race with its four DTM drivers Lucas Auer, Philipp Eng, Marco Wittmann and Sheldon van der Linde.

Marcel Mohaupt, managing director, ITR GmbH
“The battle for the championship is gradually heating up. It is wonderful that spectators can witness the tension live from the grandstands on site. Last weekend already, the drivers’ parade right in front of the spectators was an emotional affair for both sides. The Nürburgring is firmly established in the DTM’s DNA. In the process, the sprint circuit is almost a guarantee for thrilling touring car action, just as fascinating for the fans in the grandstands as for the viewers in front of the TV screens.”

Mike Rockenfeller, Audi Sport Team Phoenix
“I think that the balance of power will be very similar to last weekend. There won’t be too many changes. The sectors that are decisive for overtaking are still there, they are part of the sprint circuit. At this sprint circuit, we have been racing for many, many years already. I am in my 14th year in the DTM, so I know this track pretty well. And I am delighted that we will be racing in front of spectators again at my home circuit, just like last weekend.”

Marco Wittmann, BMW Team RMG
“For us, the action continues at the Nürburgring straight away, but this time at the short configuration. As a racing driver, you are happy with so many races in a row. I liked the long Grand Prix circuit really well, it was great fun to race at the long track for once. Now, it is back to familiar territory, the sprint circuit. There, we were always very strong as the BMW Team RMG in the past. We know that the current season isn’t easy for us and that Audi is very strong. But we aren’t giving up, we continue to work, and we try to find the details on the car to reduce the gap. Therefore, we hope for another good weekend. And, of course, I am already massively looking forward to seeing fans in the grandstands again. That was really cool, especially during the starting grid procedure. Seeing how the fans were clapping their hands and were happy to be there, that giving a lot of additional motivation, even though there are still restrictions in place, meaning that fans can’t get into the paddock. But it is a first step that is definitely making us feel well.”

Harrison Newey, WRT Team Audi Sport
“Last weekend wasn’t easy for WRT Team Audi Sport. We have been working super hard, we have analyzed everything. We can apply many things from what we have learned last weekend for the next weekend at the Nürburgring. Personally, I have learned a great deal about the track, so I hope for the second time that we have a good pace and that we can make some steps forward.”